Andi has narrowed down her pack of good-looking men to 19 and they’ve moved into the mansion and are ready for the real competition for Andi’s hear and hand. While this promises to be a dramatic season (possibly more than when there are almost 20 women), we’re looking forward to getting to know (and bet on) some of these cuties.

Once the guys were settled in and did a toast to Andi (aww), Chris Harrison walked in to see where the guys were at with their blushing Bachelorette. After a bit of a pep talk on love and how awesome Andi is (duh), Chris got down to business and explained that this week they’re facing two one-on-one dates and one group date, and, as usual, if the guys on the one-on-ones aren’t given roses, they’ll be sent home immediately. The first date card was left there on a table, making all of the guys giddy like schoolboys and then Eric (my heart actually broke a bit) was given the first date card.

And then Andi rolls up in a convertible looking all kinds of awesome (seriously, her closet = want) and awards the group of guys with hugs before whisking Eric away for to the beach. The two (adorably) built a sand castle, flew some kites, made sand angels and caught some rays. And then in comes a helicopter for Andi and Eric and takes them for a scenic trip along the coastline before stopping on a snow-covered mountaintop. Hopping out of the chopper in shorts and flip-flops, even explorer Eric was flabbergasted—especially when Andi dropped the bomb that the two were going to be snowboarding together. Poor Andi was almost a disaster (especially next to the outdoorsy Eric), but she put on a good face and Eric seemed smitten even watching her tumble and curse in the process. Taking Andi down the hill (sans falling), Eric held her hands the entire way and “looked hot doing it.” After they finished their snow bunny date, they snuggled in the snow a bit with warm cups of cocoa before sledding down the rest of the hill. After the snow, Andi and Eric headed over to a cabin for a cozy and romantic dinner. Eric regaled Andi with tales of his travels around the world—including Syria where he explained kind of an emotional story heading into a warzone. After an amazing first date, Andi gave Eric the first date rose and then finished off a perfect day together by roasting marshmallows by the fire (Seriously. Swooning HARD). 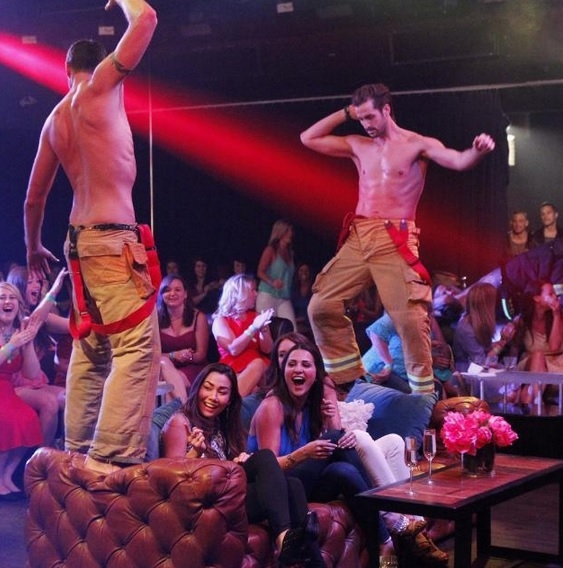 Now came time for the group date. Armed with 14 guys (Brian, Marquel, Bradley, Greg, Brett, Patrick, Cody, Tasos, Josh, Ron, Carl Marcus, Nick S. and Dylan), Andi brought the guys to “bare their souls” for charity—basically perform a Magic Mike-like dance show. Let me just say: the boys got mooooves. While most of the guys were taking the partial nudity quite well, Marcus (who Andi is totally smitten with, by the way) who had to do a solo dance was really nervous, particularly because he’s a little more on the reserved side. And then Kelly and Sharleen from Juan Pablo’s season showed up to help Andi with the judging and we girl crushed a little harder because they’re actually all friends in real life. With a room full of screaming women, the first group of guys came out—HOT DAMN. Nick S. came out for his solo dance dressed as a robot and then showed off maybe a biiittttt too much (just a thong-laced backside, nbd). After the firefighters made the stage super hot, the last group came out right before a super nervous (but adorable) Marcus—and friggin ROCKED it. He went out and danced for Andi and was actually adorable about it. (Side note: it’s amazing what men will do for the potential of sex.)

Once all the guys cleaned off their body oils, the group got back together in a nice mansion for some drinks and socializing. Brian stole the first little chat with Andi and turned himself around quickly for Andi. Even though he was super nervous the first time he met Andi, he seemed confident and calm with Andi by his side. Next up was Nick S. who tried to prove to Andi that he wasn’t just another ex-pro sports player and that he was more than just a playa. His calling Andi out worked to his advantage because he nixed the stereotype that Andi was actually thinking about him and put himself in the good books (especially after she saw his ass not long before). But, it wouldn’t be The Bachelorette without someone being in a drunken stupor. Craig got a wee bit friendly with the libations, and, mixed with his strong personality, became a bit annoying. Craig couldn’t keep his drunkenness to himself so naturally he had to hang out with Andi and started with the awkward questions and then gave her a super uncomfortable ass-out hug. After he left Andi briefly, he came back to bug Andi and the next guy in line just before hopping in the pool—clothes and all. While Andi was at first being really understanding because Craig was so nice to her at the start, when Craig decided to go for a swim, she was pissed. Once again one drunken fool is monopolizing (and ruining) the evening for everyone else. After the producers had to take Craig away and calm him down, Marcus swooped in to save the night and bring Andi’s tense mood back up—and it totally paid off for him as Andi awarded his amazing chivalry with the second rose of the week. Sadly though, some of the guys were left without any time with Andi thanks to the party boy Craig (who is lucky as hell Andi didn’t send him home right away).

Farmer Chris got the final one-on-one date of the week, leaving us still curious as to what the hell a pantsapreneur is. Dressed to the nines like an adorable 40s glam ensemble, Farmer Chris and Andi went to the races, but not before Andi let Chris pick a snappy outfit fit to match her sweet dress (and warranting the line of the night from city girl Andi: “If that’s what farmers look like I need to move to the country.” RIGHT THERE WITH YOU GIRL). After chatting eternal love with a couple married 55 years, Andi and Farmer Chris had a quiet conversation about Farmer Chris’ past love and how he felt about moving forward. After breaking off a prior engagement, Farmer Chris seemed really interested in Andi and Andi respected everything he had to say and seemed to really dig what Chris had to offer her—even though she looked just a bit weirded out when Farmer Chris said, “I can say you are the one… I was hoping for.” Whether or not she was actually put off by the statement, she liked a lot about Farmer Chris and gave this country boy a rose and then topped off the night with a surprise: A romantic dance session with a live band. (Is anyone else finding this episode IDENTICAL to the first night of dates in JP’s season? Complete with uncomfortable nudity, a drunken idiot and some form of snow? Just me?) And then we had our first serious smooch of the season. Helloooo, Farmer Chris.

At the cocktail party, tensions were running high. Between Craig trying to make nice after his awful drunken behavior at the group date to the rest of the guys (particularly ones who hadn’t even gotten a date with Andi) trying to sneak in a last-minute chat with her before the rose ceremony, Andi’s attention was being pulled in every direction. Nick V. sat down to chat with Andi and really seemed to wow her with what he wanted out of life and love. And then Marquel (ooooh Marquel) came and just dazzled Andi with his sense of humour and charming good looks. And then we got our second smooch: Josh and Andi has a special moment together full of laughing and ending in kissing. Afterwards, Craig really tried to make amends with Andi by singing her a funny little song (of course while the rest of the nosy guys were peeking in). Admittedly, it was kinda cute even though he was totally tone-deaf and should really not quit his job as a tax guy.

And, as it always happens, the episode ended in a rose ceremony, sending three hopeless chaps home—a teary-eyed Carl (I'm a sucker for a hot firefighter… he can make his way up to Toronto if he likes), pro golfer Nick S. and a regretful Craig who apparently just couldn't redeem himself from his drunken behaviour. Alas, the group is down to 16 and next week's episodes promise to be a travel-filled two-night event.

BREAKING: “The Hills” Was Fake