by Christopher Turner
Pop Culture Style The Story Of
No comments 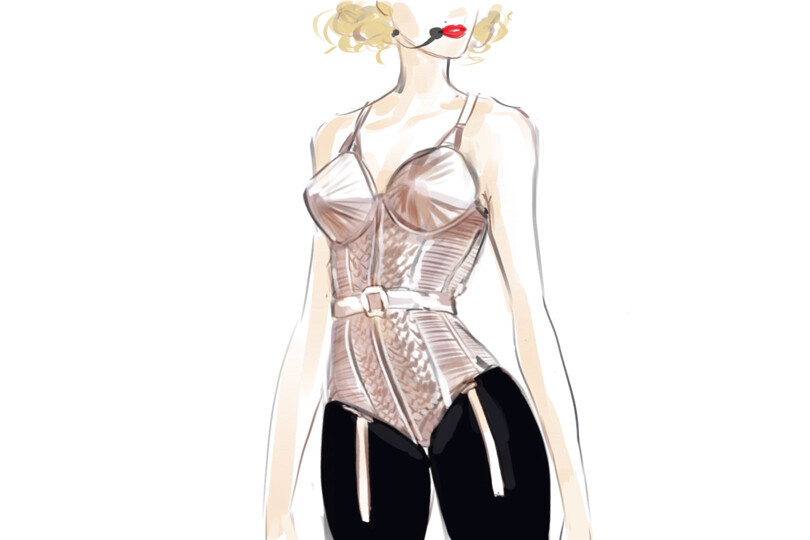 Madonna’s pink satin cone bra made its first appearance through strategically placed slits in a black pinstripe Jean Paul Gaultier suit as she emerged on stage during her culture-defining Blond Ambition Tour back in 1990. She wasn’t the first to wear a cone bra, but she ultimately birthed a major fashion moment when she danced and sang her way across the stage wearing the bra and corset design in Chiba, Japan – the first stop on her worldwide tour. The superstar has created so many signature looks over the past four decades, but the cone bra has become synonymous with both Madonna and Gaultier. It requires no introduction.

The sensational concert costume took months of collaboration to complete and was inspired by 1950s bullet bras and 1980s underwear-as-outerwear street style, a show-stopping combination that played to Madonna’s counterculture sensibility.

The history of the bullet bra
Before we get to Madonna, it’s important to recognize the origins of the bullet bra. The first ones were made by Frederick Mellinger, the Hungarian-American son of a tailor, who sold lacy black lingerie from his famed Los Angeles store Frederick’s of Hollywood, which opened in 1946 on Hollywood Boulevard. Those early bullet bras were typically full-support brassieres with paraboloid cups that typically featured decorative spirals and concentric circle stitchings that centred on the nipples.

By the late 1940s, lingerie company Maidenform followed suit and began making its own version of the conical bra, the Chansonette, which it marketed to the masses through the questionable “I dreamed” advertising campaign. The wildly successful ads featured half-clothed women in situations ranging from the mundane to the outrageous. Each ad had a caption hinting at the model’s unmet ambition, from “I dreamed I went on a tiger hunt in my Maidenform bra” to “I dreamed I won the election in my Maidenform bra.” Let’s just say…they wouldn’t fly today.

Regardless, soon pinup models and Hollywood starlets were wearing a combination of bullet bras and tight, form-fitting sweaters to enhance their curves (and accentuate the shape of the bra). The look launched the term “sweater girl,” and Hollywood actresses like Lana Turner, Jayne Mansfield and Jane Russell kicked off the sweater girl trend that was initially intended to play off the idea of female empowerment. Whether that was actually the case is debatable, but bullet bras quickly made their way into the dressers of most young women across North America.

Madonnamania
Madonna, who burst on the scene in 1983 with her self-titled debut album and her take-it-or-leave-it approach to downtown street style, really needs no introduction. Since her breakthrough, her relentless drive has seen her officially become the most successful female artist of all time.

Through the first decade of her career she had captivated audiences with hit after hit, setting numerous worldwide fashion trends and boosting the careers of established as well as up-and-coming designers. In short, she dominated the fashion world as well as the pop world.

In 1989, after three back-to-back multi-platinum albums, Madonna readied the release of her fourth studio album, Like a Prayer, in March 1989. However, the release of the Mary Lambert-directed music video for the single “Like A Prayer” stirred controversy like never before, with images of Madonna kissing a Black saint alongside images of burning crosses and stigmata. The Vatican condemned the music video, Pope John Paul II involved himself in the matter and encouraged fans to boycott the singer, while family and religious groups protested against its broadcast. Pepsi wasn’t happy either – they had already paid Madonna $5 million to appear in a two-minute television commercial that featured her and the song, and when the backlash began they were forced to pull the commercial and ultimately cancel her sponsorship contract. Madonna kept the $5 million, and a few days before the album’s release she nonchalantly told the New York Times that “art should be controversial, and that’s all there is to it.”

Plans for the Like a Prayer World Tour were pushed back after Pepsi pulled sponsorship of the tour.… But the success of the album, on top of the upcoming release of the I’m Breathless soundtrack that would accompany the 1990 film Dick Tracy (starring Warren Betty and Madonna) as well as Madonna’s insane popularity at the time, saw Sire Records announce plans for the Blond Ambition Tour in November 1989.

Long-time admirers
Madonna was a long-time admirer of French fashion designer Jean Paul Gaultier, who was often referred to as the “enfant terrible” of the fashion industry. She had praised him in interviews as early as 1984, wore one of his corset dresses to the premiere of Desperately Seeking Susan in 1985, and appeared in Harper’s Bazaar wearing one of his tutu-like creations in 1988. 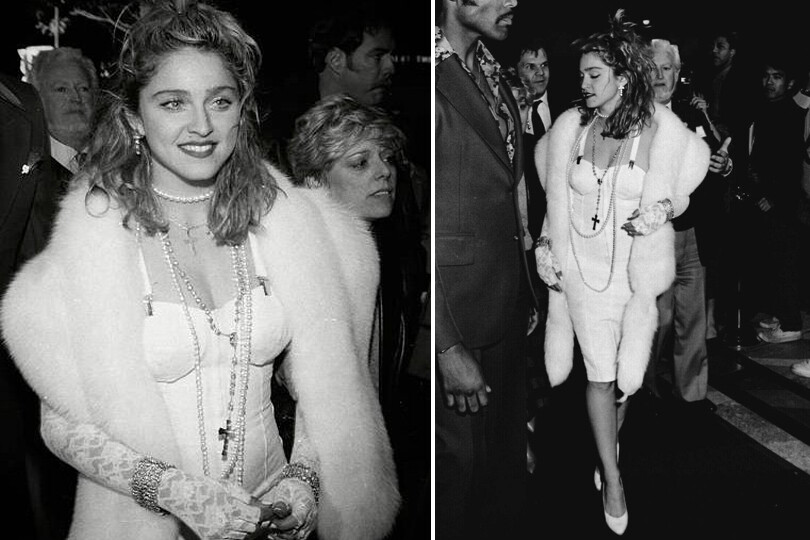 In the early planning stages of her Blond Ambition Tour, Madonna was set on Gaultier creating the costumes. She had fashion photographer Herb Ritts (who she was working with at the time) reach out to Gaultier and let him know that she wanted to work with him; she followed up with a handwritten letter that expressed her admiration for his humorous take on fashion, and then a phone call. Gaultier happily accepted the job offer. He was already an admirer of Madonna and expressed admiration for the fact that “when she was not so famous, she made her clothes herself…the visible bra, the transparencies, the crucifixes as jewellery.”

During an interview with the New York Times in 2001, Gaultier recalled: “When Madonna first called me in 1989, it was two days before my ready-to-wear show, and I thought my assistant was joking. I was a big fan. She asked me if I would do the tour. She knew what she wanted – a pinstripe suit, the feminine corsetry. Madonna likes my clothes because they combine the masculine and the feminine. It was, that no, that yes, no, yes, no.”

When Madonna met with Gaultier to brainstorm costume concepts for the tour, they huddled in a hotel suite at New York City’s Carlyle Hotel and watched the 1972 film Cabaret (directed by Bob Fosse and starring Liza Minnelli) for inspiration. Over the next three months they would meet in Paris’s Bofinger restaurant, Balajo Club, Zoopsie nightclub and Théâtre Equestre Zingaro to finalize the details of the costumes for the tour. Fittings then took place at Gaultier’s ateliers in both New York and Paris.

When Gaultier spoke with Lucy O’Brien for her 2008 biography Madonna: Like an Icon, he remembered this period as one of intense stress, claiming to have gotten through “350 [A]spirins and 1,500 sketches” before the singer approved of his designs. 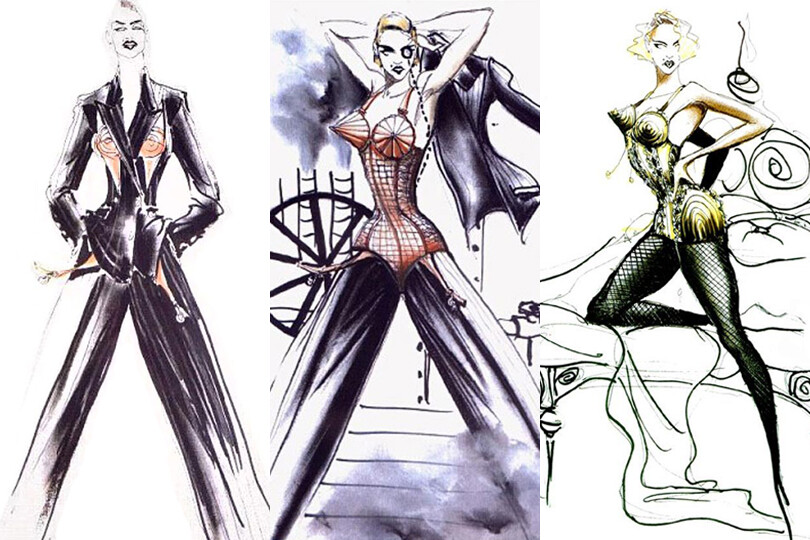 The conical corsets
Gaultier had been experimenting with cone bras and corsets for some time before collaborating with Madonna on the Blond Ambition Tour. He sent early iterations of the style down the runway in September 1984, inspired by the bullet bras that had created the unmistakably feminine silhouettes of Hollywood stars in the ’40s and ’50s. 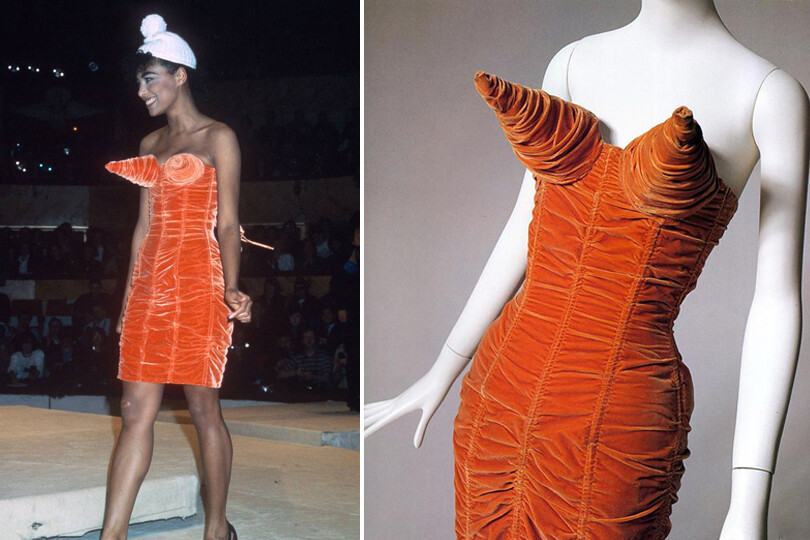 Gaultier’s final costumes for the Blond Ambition tour included a green and white striped vaudeville-style corset, a black mini-dress trimmed and stitched with a stuffed West African stork called the marabou, a flashy bright fuchsia blazer, a black clergyman’s robe with a neon crucifix and a cage vest, a black Bob Fosse-inspired ensemble complete with bowler hat, a flirty polka dotted ensemble, pin-striped suits, and two different corsets with conical-shaped cups (one was pink-coloured and the other solid gold).

Gaultier explained to the New York Times that the idea for the cone bra first came to him when, as a child, his grandmother took him to an exhibit. “I have loved corsets since I was small. When I was a child, my grandmother took me to an exhibition, and they had a corset on display. I loved the flesh color, the salmon satin, the lace.… The gold conical bra was just an extension of that idea.”

“I love Madonna. That was one of the best times of my career,” he told The Observer years later.

Blond Ambition
Madonna gave the world a true fashion moment when she stepped onstage on April 13, 1990, in Chiba, Japan, for the opening night performance of her Blond Ambition World Tour. The opening number was “Express Yourself,” and the show opened with bare-chested male dancers gyrating against an industrial backdrop of oversized cogs and hissing pistons. Finally, Madonna was lifted on an open elevator to the top of the stage, with a slick, braid-wrapped synthetic high ponytail (which was eventually replaced with tight curls on the European leg of the tour) wearing a double-breasted pinstripe suit, with garters swinging from underneath the jacket. A hint of the pink corset bra was visible through purpose-built slits in the front of the jacket. She peered through her monocle and asked the crowd, “Do you believe in love? Well, I’ve got something to say about it and it goes something like this…” 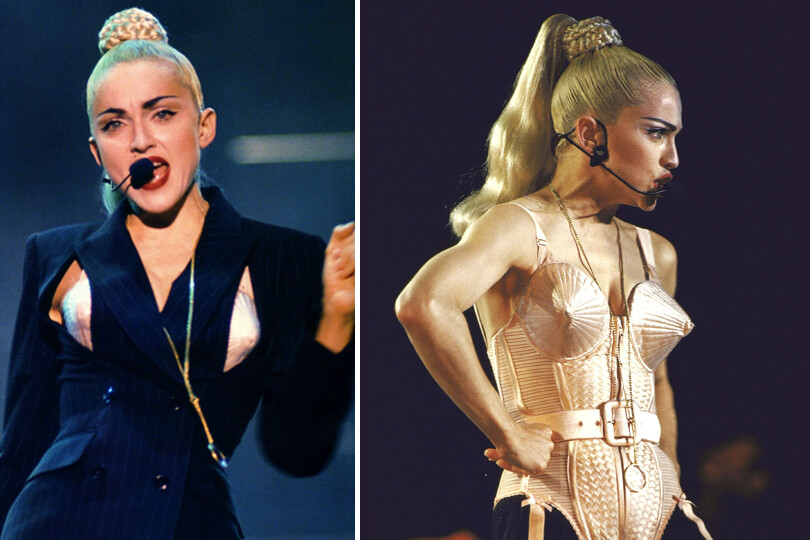 When Madonna removed the jacket halfway through the opening number, the crowd went wild. It was the perfect follow-up to the conservative backlash: a pink structured cone bra and corset that oozed old-fashioned femininity. But on Madonna’s muscular body, the feminine look also exuded authority and power.

It’s true. And, as an icon of popular culture, it’s probably not too surprising that Madonna would ultimately bring back the conical bullet bra as a statement of female empowerment to kick off the ’90s.

Legacy
The image of Madonna wearing Gaultier’s cone bra is so iconic and enduring that they are continuously used in reference to the singer today, decades later. As for the pink cone bra itself that she wore on stage in 1990…it sold for $52,000 at the Christie’s Pop Culture auction in London on November 29, 2012. 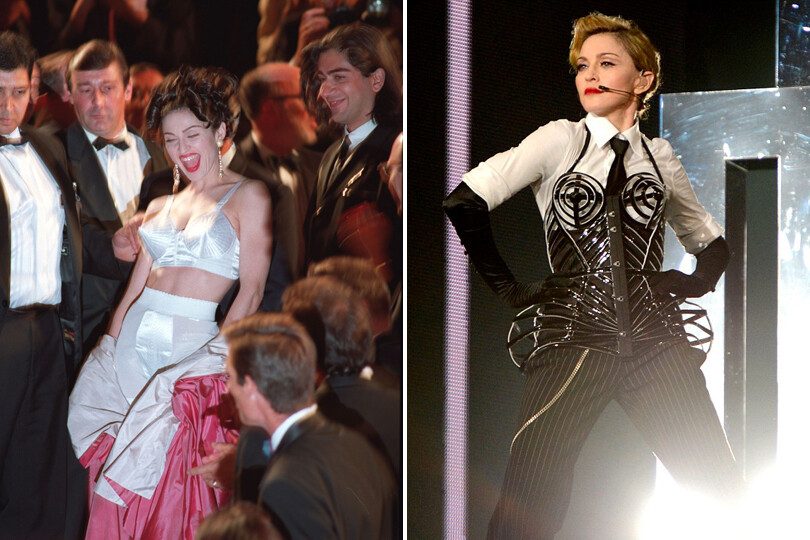 Of course, Madonna and Gaultier’s cone bra has had other outings, in various different guises, throughout the years. Mostly notably, in 1991 she wore a new Gaultier-designed cone bra to the Cannes premiere of Truth or Dare, a documentary about the Blond Ambition Tour that was directed by Alec Keshishian and was known in Europe and Japan as In Bed With Madonna. Again, she initially kept the bra under wraps, veiled by a pink kimono robe that she later dropped to reveal a white satin cone bra paired with sexy white high-waisted undergarments. The cone bra was back in action for Madonna’s 2012 worldwide MDNA tour, when Gaultier reimagined the original look.

“We played with the ideas of a suit and a corset,” Gaultier said of his creation to WWD before the opening night of the MDNA tour in 2012. “But the corset is now like a cage.… What I have done this time is a nod to the conical bra corset of the Blond Ambition tour but reinterpreted in 3D, in patent leather on the outside with metallic leather on the inside. It’s all about masculine and feminine, Madonna and Jean Paul Gaultier classics reinterpreted for 2012.… I love Madonna. She is the only woman I have asked to marry me. She refused, of course.”

She may have said no to the marriage proposal, but from a style standpoint, Gaultier’s avant-garde, gender-nonconforming looks have been a perfect match for Madonna’s provocative performances over the years. Gaultier has dressed her for the red carpet and designed countless costumes for her, though none quite as iconic as the original cone bra. Ultimately the two have formed a long-lasting friendship as their work together has gone on to become a part of pop culture and fashion history. Probably worked out better than the marriage would have. 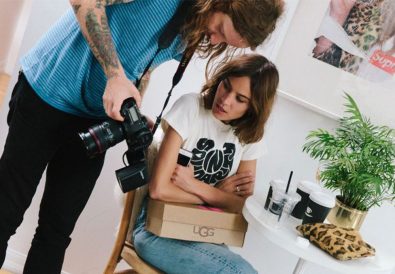