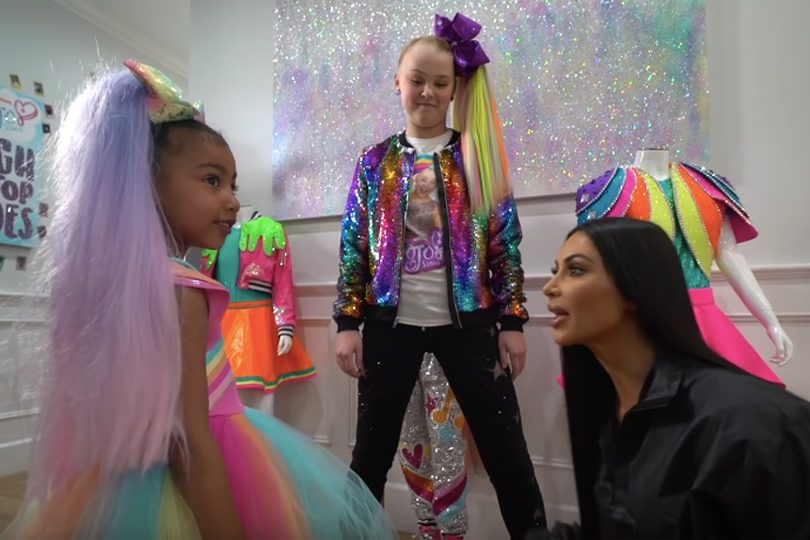 We met North, and North met her new BFF…

Just in case you have been living under a rock, two very important, and very young famous people met, and we were all blessed with video evidence of the exclusive event. Dance Moms star turned teen YouTuber/multi millionaire hair bow mogul JoJo Siwa babysat the spawn of the selfie queen, and monochromatic children’s wear enthusiast North West. Apparently it all started when mom Kim Kardashian set up the play date with JoJo, who is one of North’s idols (over an Instagram DM probably). To compare, it would be like any of us going to Khloe’s house and eating a cookie out of one of those jars. During their day together, the two played hide and seek, made slime, raided JoJo’s bow closet, drank some juice, and played on top of a car. Throughout my multiple viewings of the video I had a lot of questions, thoughts, and realizations.

How short is Kim Kardashian?
As soon as Kim and North entered the Siwa mansion, I was immediately shocked that the 15-year-old literally towered over Kardashian. So how tall is Kimberly really? According to a quick (and probably incorrect) Google search, turns out she’s only 5’3, which is how tall I am, and also a very average height for women, so this ended up being a bit disappointing, but what can you do? I guess JoJo Siwa is just really tall for a 15-year-old (she’s 5’9).

Did Kanye approve of North’s outfit?
We are used to seeing North West in monochromatic outfits, which are usually ] 90s grunge silk slip dresses over t-shirts, combat boots, and Balmain blazers over tutus. She turned up at JoJo’s wearing a multicoloured tutu dress, a lilac hair extension ponytail, and a bright bow in her hair. For the first time, North looked like any regular kid from the middle America wearing whatever they could get their hands on at their local Target. Did Kanye ok this non-Yeezy outfit for the occasion? Did Kim sneak the tutu and ponytail out of the house in a Birkin and change North on the way over? I still have so many questions about the outfit.

North West is super shy.
Coming from the thirst-queen herself, we would have expected North to be bold right out of the gate, but she was actually pretty reserved. If you keep up with the Kardashians, this video was kind of a big deal. It was the first time we were able to see North outside of a curated Instagram photo, and nobody really knew what to expect. She didn’t say much, but really came out of her shell during the slime-making activity. Nothing says feeling comfortable in a new space like spilling fine glitter all over a hardwood floor.

Was this the first time North experienced more than the colour beige/grey in home décor?
If you’ve never seen JoJo Siwa’s house I highly suggest you watch one of her videos. Siwa’s house is a rainbow explosion, covered in sparkles, and photos of herself, and her branded merch everywhere. She has a bunk bed with a slide, and a whole room filled with her own merch (which she lets all of her guests to shop through). Despite a few rooms that we never get to see in (I suspect they are decorated in neutral tones to rest her eyes every few hours), the whole house looks like a unicorn threw up in it. If you’re a Kim K fan, you know that her house is an empty grey gallery, and to be honest I’m not even sure she has a couch. Was this the first time North had seen more than grey used as home décor? Her eyes lit up while entering the house so I’m thinking yes.

North’s hilarious reaction to the concert tickets.
At the end of their day in the rainbow filled clouds together, Kim came to pick up her child. That’s when JoJo presented North with tickets to her concert, and told North she could invite as many of her friends that she wanted. North reacted, as we would expect any millionaire’s child to. At first she looked confused because she most likely already had tickets and a VIP lanyard for herself and probably Penelope too. She did however get excited after Kim hyped the event up, gave JoJo a hug, and thanked her for her babysitting services.

This interview was the first time we saw North outside of the Kardashian narrative, and we learned a lot. Yes, North was really cute, and was almost a normal five-year-old. Kim seemed like a normal/chill mom, getting down to North’s level, and making sure she was comfortable with everything before she left. I also learned that it must be exhausting being JoJo Siwa. Is she ever not yelling? Does that ponytail give her a headache? Is she yelling because of the ponytail?  North was shy and sassy, and you can definitely see Kanye’s influence while she interacts with other humans, and I just hope we get to see more from her in the future.