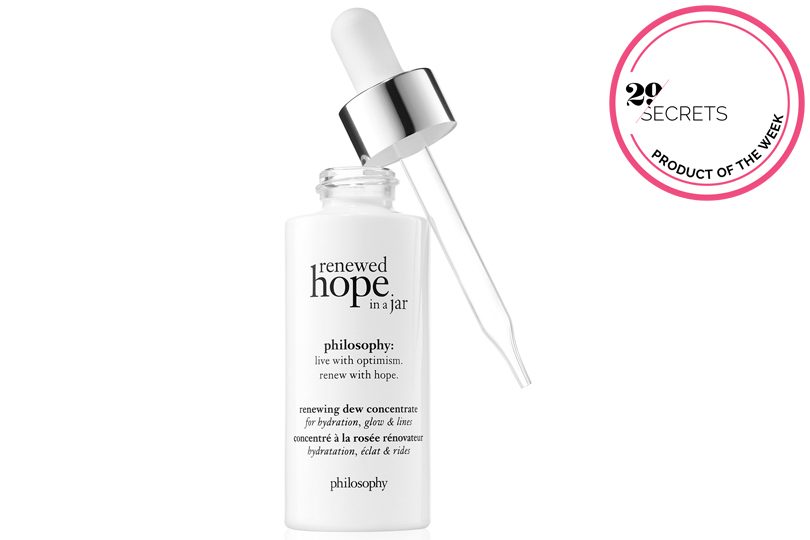 Remember Philosophy’s Hope in a Jar? The face cream with the label that reads: Philosophy: where there is hope there can be faith. Where there is faith miracles can occur.

Miracles like, becoming a cult-favoured product almost immediately after it’s debut in the late ’90s and having staying power for over two decades. Getting Oprah’s stamp of approval on daytime television and then, on it’s 15thanniversary featuring Oprah’s baby picture on it’s jar. And of course, sparking multiple brand spin-off products like Hope in a Tube, Hope for Everywhere, Renewed Hope in a Jar and now, Renewed Hope in a Jar Renewing Dew Concentrate.

This latest hope-filled product is a youth-inducing serum and like its predecessors can smooth fine lines into oblivion. Loaded with top wrinkle-busting and radiance-infusing ingredients, inclusive of aloe vera, glycols, vitamin C and peptides, its formulation takes a 3D approach to achieving beautiful skin by hydrating, brightening and smoothing the epidermis all at the same time. Safe on even the most sensitive of skin, the serum can be applied twice a day before rubbing on your day and night creams. Keep up this daily regime for eight weeks and the experts at Philosophy say you’ll notice improved skin texture, radiance and elimination of lines and hyperpigmentation. But what you’ll probably recognize and like first is the tagline on the label. This time is reads: Philosophy: Live with optimism. Renew with hope.

Philosophy’s Renewed Hope in a Jar Renewing Dew Concentrate is $56, available at Sephora stores and online at www.sephora.com.