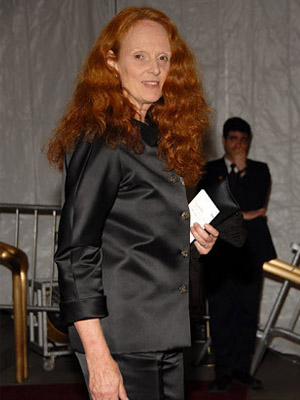 Literary and fashion fans rejoice “ looks like Vogue‘s creative director Grace Coddington has made plans to write her autobiography.  (So those cold upcoming autumn nights with hot tea and a good book just got that much more appealing.)

Having already starred in the public and critically acclaimed The September Issue last year, Coddington will be once working with Men’s Vogue editor-in-chief Jay Fielden who previously helped her with Grace: Thirty Years of Fashion at Vogue.

In an interview with WWD, Fielden revealed: We’re just starting, and I think it’s going to be a really fun project.

You can say that again, male version of Anna Wintour.  When it comes to non-fiction meets fashion insider books, there’s a ready-made audience waiting in the wings “ so who doesn’t want to give this memoir a read?  (Especially with such an interesting life story involved.)

The book will take readers on Coddington’s journey from model to editor at both British and American Vogue “ as well as the car accident that changed her life.  (So this isn’t just another fashion story to all you naysayers.)  Clearly the only thing better than this would be the detailed life story of Anna Wintour.