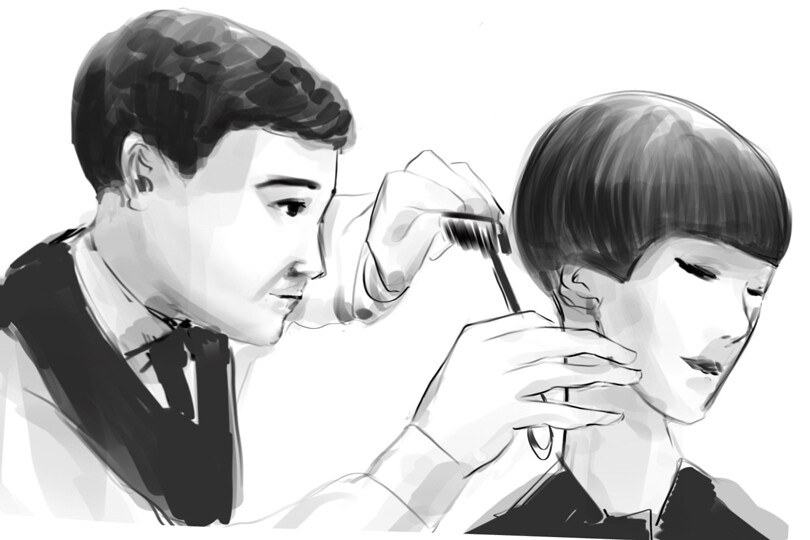 Renowned as one of the most famed hairdressers of all time, Vidal Sassoon is remembered for changing the craft of hairstyling forever. He dominated the 1960s, ending the beehive craze from the previous decade with his sharp, simple and short cuts for women that boosted new feelings of personal freedom. In a matter of a few years he became a celebrity stylist, and then a celebrity in his own right, first in the UK and then around the world. In the ensuing decades he became a household name by launching salons, cosmetology schools, and a successful line of hair products that sold internationally.

A genuine tale of rags to riches, Sassoon’s life took him from a tough childhood spent in a London orphanage to international success. Read on for more on the man credited with changing the world with a pair of scissors.

Grinding poverty
Vidal Sassoon was born on January 17, 1928, in the Hammersmith neighbourhood of London, England, to Betty (Bellin) and Jack Sassoon. Betty, who worked in a sweatshop, was London-born to parents who had immigrated from Ukraine; Jack, who dealt in carpets, had been born in Thessaloniki, Greece.

The family lived in extreme poverty in the west London neighbourhood of Shepherd’s Bush with other Jewish-Greek immigrants, until Jack abandoned the family for another woman when Sassoon was three years old and his brother Ivor was a newborn. The family was suddenly evicted from their home, and were forced to move in with Betty’s older sister and her three children in a tiny flat in the Petticoat Lane neighbourhood. There the seven of them lived with no bathroom or inside toilet, forcing them to share the one toilet on the outside landing with three other families. “All we could see from our windows was the greyness of the tenement across the street,” Sassoon wrote in his 2010 book, Vidal: The Autobiography. “There was ugliness all around.”

In 1933, Betty placed her two boys in an orphanage run by the Spanish-Portuguese Synagogue. The orphanage rules were strict; their mother was only allowed to visit the boys once a month, and was never allowed to take them out.

The boys lived at the orphanage for the next seven years, until Sassoon was 11 years old. At that point they were reunited with their mother, who had recently remarried and felt financially able to support them. However, money was still tight and by the time Sassoon was 14 he was forced to leave school. His mother tried to get him into a hairdressing apprenticeship – she claimed she had had a vision of her son’s future, although Sassoon is also quoted as saying that “her feeling was that I didn’t have the intelligence to pick a trade myself.”

When Betty took her son to the hairdressing school of a well-known stylist, Adolph Cohen, she was disappointed to discover that the two-year program would cost much more than they could afford. “My mother looked so terribly dejected,” Sassoon recalled. “I thought she might faint.” A few minutes later, Cohen called them back to the salon and told him, “You seem to have very good manners, young man. Start Monday and forget the cost.” His mother began to cry out of joy.

For the next two years Sassoon spent his days working at the salon with Cohen, but led a very different life by night. Profoundly affected by emerging details about the Holocaust, he joined a Jewish organization shortly after the end of the Second World War and would spend his evenings fighting anti-Semitic fascists on the streets of East London.

In 1948, he volunteered to fight in Israel’s Independence War with the Palmach (an elite commando force in the Jewish underground army), and left London to be stationed along the Gaza border – a period which he later described in one interview as “the best year of my life.” He returned to England after a year, following the death of his stepfather, and continued training as a hairstylist. He began training under famed hairstylist Raymond Bessone – otherwise known as Mr. Teasy-Weasy – in his esteemed salon in Mayfair, and undertook three years of speech training and elocution lessons at the Old Vic, determined to get rid of his cockney accent.

Sassoon’s first salon
Sassoon opened his first salon in 1954 at the age of 26. The Bond Street salon was so small that customers had to sit on the stairs while waiting, but that didn’t matter: “Sassoon’s,” as it was soon known, quickly became one of London’s most fashionable hair salons. His hairstyles and cuts were the complete antithesis of what other salons offered: when you went for a cut at Sassoon’s, you could forget about leaving with shoulder-length, overly feminine manes or those bombshell beehives of the Fifties.… Instead, Sassoon brought out the scissors and introduced new geometric and symmetric shapes that had never been seen before. Sleek bobs became the new must-have ’do, along with striking angular cuts – both which required minimum styling and were low maintenance.

By 1958 business was booming, and Sassoon moved to a bigger shop. That year – influenced by the Bauhaus designs he had studied – he also created the “shape,” which would become one of his signature cuts.

But that was just the beginning.… His major breakthrough came in 1963, after cutting film star Nancy Kwan’s four feet of hair into the geometric ‘bob’ style. As he was cutting her hair, Sassoon was so sure that he was onto something great, he called up photographer Terence Donovan and took Kwan straight over to his studio. Donovan captured the iconic portrait of Kwan that would be featured in editions of Vogue magazine around the globe, and the hairstyle became an instant trend with liberated women delighted to finally be free of curlers and hairspray. 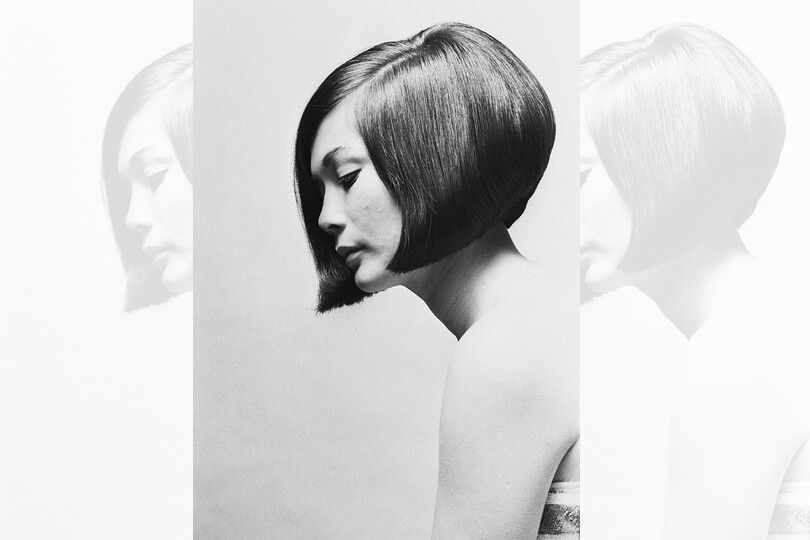 Sassoon continued to popularize his classic “bob” cut when he cut and styled the hair of mod fashion designer Mary Quant and her models. Quant was famous for creating the miniskirt, and was doing for clothes what Sassoon was achieving in hairstyles. And when Roman Polanski was shooting Rosemary’s Baby in 1968, he paid Sassoon $5,000 (equivalent to $38,000 in 2021) to come to Hollywood to give Mia Farrow her famous pixie haircut in a Hollywood boxing ring while the press watched. “It’s a Vidal Sassoon; it’s terribly in,” Rosemary says in the film when another character inquires about her hair. The publicity stunt brought him to the attention of American women. 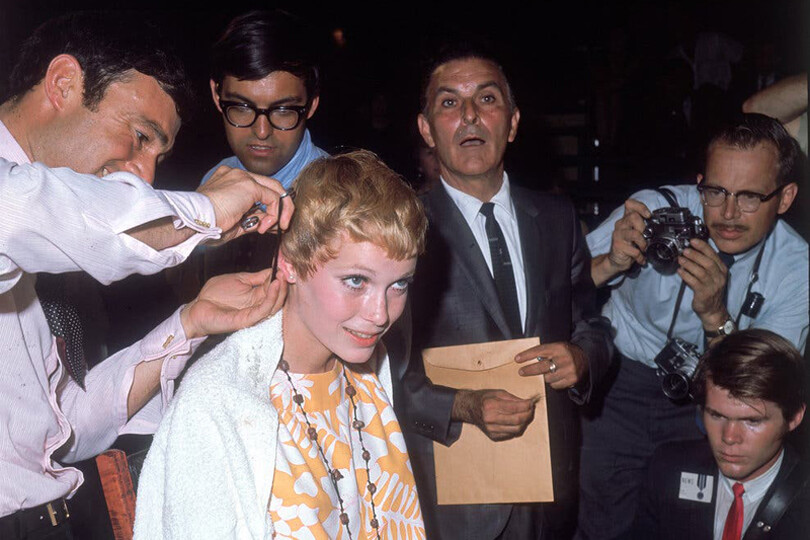 Another of Sassoon’s career highlights was his revolutionary ‘Five-Point Cut’ debuted by 1960s top model Grace Coddington, who would go on to become the fashion director of US Vogue. The original version of this quintessential cut was a snug, sleek helmet with a W cut at the nape of the neck and a pointed spike in front of each ear.

“He didn’t create it for me; he created it on me,” Coddington said in 2012. “It was an extraordinary cut; no one has bettered it since. And it liberated everyone. You could just sort of drip-dry it and shake it.”

“He changed the way everyone looked at hair,” she recalled. “Before Sassoon, it was all back-combing and lacquer; the whole thing was to make it high and artificial. Suddenly you could put your fingers through your hair!” 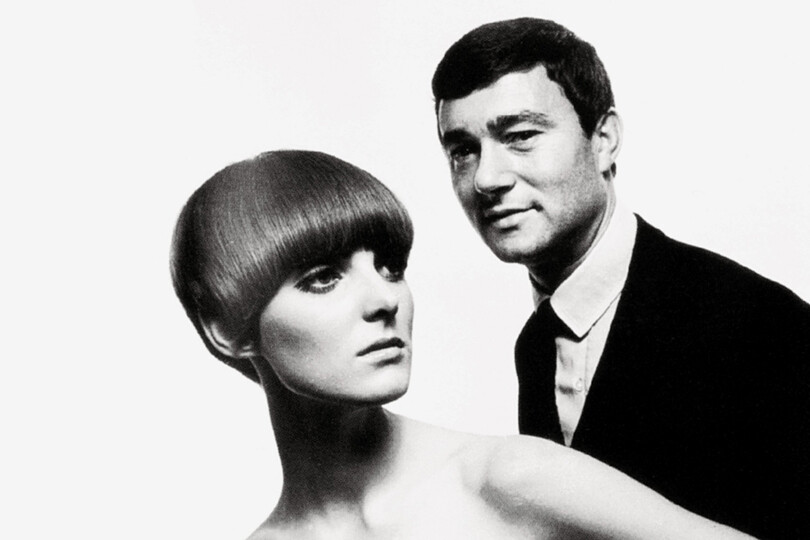 In 1965 Sassoon opened his first New York City salon, on Madison Avenue, and within five years he had opened salons in Toronto and Beverly Hills, as well as his first hairdressing school, in London. By the early 1970s, Sassoon had moved permanently to Los Angeles and had achieved rock star status in both the UK and North America. He became a business pioneer and by the mid-1970s had 14 different salons and three schools in the US, Canada, Britain and Germany. But Sassoon had bigger aspirations, and slowly began passing the management of his various hair salons over to an assistant.

Putting down the scissors
In 1973, Sassoon was set to launch a line of hair-care products. The shampoos, conditioners and other products were famously sold in television commercials featuring a woman with a lustrous head of hair and the debonair Sassoon at her side, declaring the slogan, “If you don’t look good, we don’t look good.”

By 1975 he had more or less stopped cutting hair, although he regularly appeared in the TV commercials for his successful hair-care range. Sales reached more than $100 million annually before he sold the company in 1983 (he remained involved as a consultant for a number of years but by 2004, it was reported that Sassoon was no longer associated with the brand that bears his name).

After the sale of his business interests in 1983, Sassoon devoted himself to philanthropy, spending the next few years focused on a variety of projects, most notably founding a centre for the study of anti-Semitism at the Hebrew University of Jerusalem.

There was A Year of Beauty & Health, the health-focused book he co-wrote with his second wife, Canadian actress Beverly Adams. He even – briefly – had his own American television talk show, Your New Day (1980), with a characteristically upbeat emphasis on self-improvement.

Besides his philanthropy, in the last two decades of his life, Sassoon focused on his marriage to Rhonda “Ronnie” Sassoon, the woman he married in 1992. It was his fourth marriage. (His first marriage, in 1956 to Elaine Wood, his salon receptionist, ended in divorce in 1963. Four years later he married Adams, and they had two sons and two daughters – the eldest, Catya, tragically died in 2002 from a drug-induced heart attack. Sassoon and Adams divorced after 13 years of marriage and Sassoon married his third wife, fashion model Jeanette Hartford-Davis in 1983, although they divorced soon after.)

In June 2011, it was reported that Sassoon had been diagnosed with leukemia two years earlier. He died the next year, on May 9, 2012, in the presence of family members at his home in Bel Air, Los Angeles. He was 84. His death was originally reported to be a result of natural causes, but later reported to have been a result of his leukemia.

Years after his death, Vidal Sassoon’s name lives on through his worldwide salons and training academies. After an incredible life, the legendary hairdresser earned his place in history.