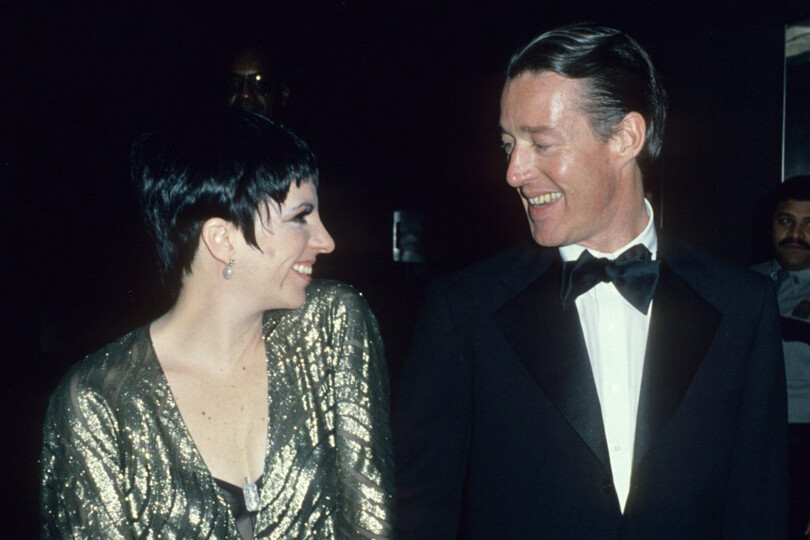 Halston, Ryan Murphy’s eponymous new limited Netflix series starring Ewan McGregor in the title role, takes a lot of liberties with the life and times of fashion designer Roy Halston. But one thing that the just-released series, based on the Steven Gaines biography Simply Halston, doesn’t exaggerate is the sartorial legend’s relationship with Hollywood icon Liza Minnelli.

Born Roy Halston Frowick, the designer first made waves when First Lady Jackie Kennedy wore his iconic pillbox hat to John F. Kennedy’s 1961 inauguration. Later, in the ’70s, he carved out a name for himself by creating Ultrasuede shirtdresses and billowy caftans while partying it up at Studio 54 with his clan of celebrity friends, including Andy Warhol, Anjelica Huston, Truman Capote, Elizabeth Taylor, Bianca Jagger and, of course, Minnelli.

In the five-episode Netflix series, Halston meets Minnelli, played by Krysta Rodriguez, after watching her perform “Say Liza (Liza With A ‘Z’),” and they become fast friends, bonding over the artistic shadows that hang over both of them. (Halston is unable to escape the legacy of Kennedy’s pillbox hat, while Minnelli is unable to escape the shadow of her mother, Judy Garland.) However, in real life the two simply met during an appointment at the designer’s New York studio that was set up by Minnelli’s godmother, Kay Thompson.

Their initial meeting in the Netflix series might have been exaggerated for dramatic effect, but the on-screen depiction of their friendship is pretty accurate. “When I met Halston, I just remember him talking and me listening.… He’d say, ‘Alright, I got it.’ He put [a design] on you,” Minnelli recalled in 2019. “And it danced with you. His clothes danced with you. We were joined at the hip from then on.”

It is true that by rebranding Minnelli, Halston was able to rebrand himself. Yes, he really did do uncredited costume work behind the scenes to make Minnelli feel more comfortable for her role in Cabaret (1972), and he did design the gold dress she wore the following year to accept her Oscar for playing Berlin nightclub singer Sally Bowles. She really did go to the Battle of Versailles designer showdown in France in 1973 to support him, and he did custom design the butter-yellow pantsuit for her 1974 wedding to Jack Haley Jr., as well as design almost all of her concert looks throughout the years. 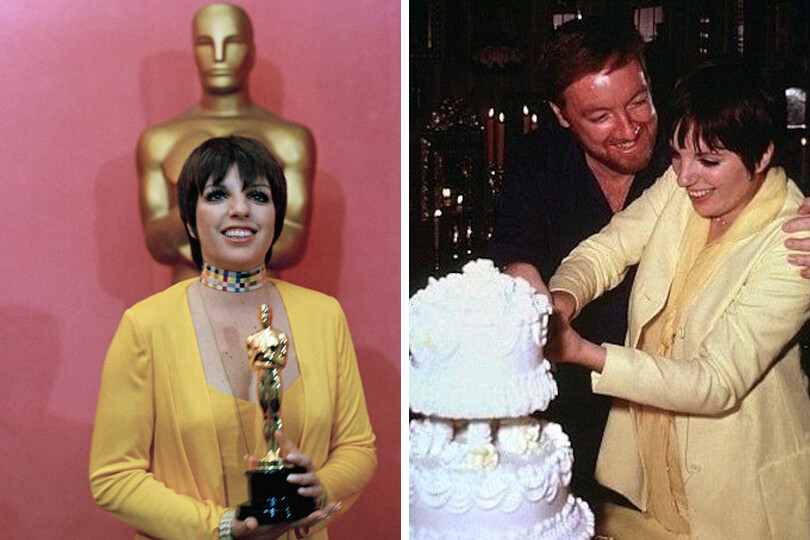 The pair were inseparable in the 1970s and most of the ’80s—he in all-black ensembles and sunglasses, she in his shimmering designs. Halston dressed Minnelli for everything, and she supported him both behind the scenes and in the front row at his fashion shows. In later years, after Halston was removed from Halston Limited for a combination of drug addiction, business frustration and other ongoing disputes, Minnelli remained his fiercest defender, and he continued to design her costumes up until his death in 1990 due to complications from AIDS. He was 57.

You can watch the real Minnelli speak about Halston just after his death at a Lincoln Center tribute in a clip on YouTube. In her short speech, she talked about the last time she ever saw him—at a fake Thanksgiving they had together before he left to enjoy the holiday with his family. A little get-together where she complained and he cheered her up. “He had that kind of a spirit,” she said. “It’s not Thanksgiving? We’ll make it Thanksgiving.” In her closing words, Minnelli remembered Halston as “tender always, courageous always, challenging always, daring me to be better than I ever thought I could be. I’ll miss him always.” Looking up towards the sky, Minnelli said, “Thanks, pal. It was a joy. We just wanted to let you know we were thinking of you.”

Eighteen years after his death, when Halston’s brand was revived for a 2008 show in New York, Minnelli sat in the front row, cheered on the designs, and raved to the press about her late friend. Acknowledging the Halston design she was wearing that night, she told the New York Times, “It’s Halston vintage, 1975—and I think it is great to celebrate the first designer who put American fashion on the map.”

In the 2010 documentary Ultrasuede: In Search of Halston, Minnelli explained that Halston “was my big brother. I loved him. I trusted him.” When she bought her Manhattan apartment, she told the filmmaker that she was overwhelmed at the prospect of decorating such an expansive space. So, she recalled, Halston told her to go out of town and forget about it. “They designed the whole apartment. I came home, and Mark [Gero, her third husband] and I walked in the front door, and the whole place was candlelit,” Minnelli said, recalling her very own Halston Home Makeover. “There were candles on every table. The lights were perfect…. We walked into the most beautiful apartment I had ever seen in my life. He had gone to all that trouble and then left so that we could discover it ourselves.”

In 2011, when Minnelli sat down with Harper’s Bazaar, she talked about how she still missed her old friend, and credited him with helping her turn into the icon she is now. “He thought of me when he designed just like Fred [composer Fred Ebb, who wrote classics like “New York, New York” for her] said he thought of me when he wrote a song.… Halston was wonderful. He had a great sense of humour about himself, and he pushed the envelope. He put us on the map.” 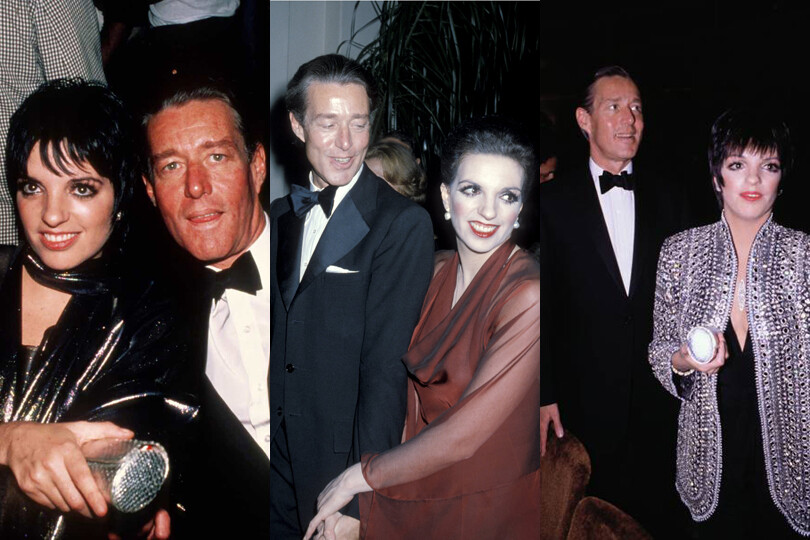 Minnelli has praised the designer on countless occasions for helping her define her now-iconic look as something that would stand out and be stylish while perfectly suiting her body and personality. “If I liked something that he didn’t think was right, he would tell me, ‘No, that is not the right shape for you; you need to hang everything off your shoulders.’ I’m broad-shouldered, short-waisted and long-legged, so you hang it off here, and it would look great,” she told Harper’s Bazaar. Halston even gave her tips on jewellery when she was still up-and-coming: “I didn’t have anything. I said, ‘I’m supporting myself in New York, doing all this stuff, you know.’ He said, ‘All right, you can’t afford gold, and men have to buy you diamonds, so you have to wear silver.’ And I was appalled. I thought, ‘Oh my God, Albuquerque.’… [But] I had never seen anything like [the Elsa Peretti pieces he gave me]. He dressed me, and suddenly I was able to go anywhere I wanted.”

Decades later, she remains a loyal friend. Minnelli was also interviewed for French-born filmmaker Frédéric Tcheng’s 2019 documentary Halston. In the documentary, she was asked about the times in Halston’s life when he was too into drugs and their relationship may or may not have been rocky—but if there is anything to be dished, we’re not going to hear it. “It’s very hard to do an interview about your best friend,” she said. “Especially if what’s popular in that day and age time is digging a little. I don’t like it. I hated it when they did it to my mother or my father or myself. And I won’t do it to Halston, I just won’t. I refuse.”