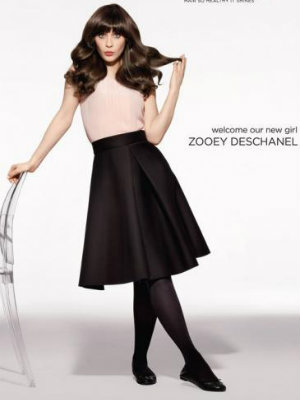 Zooey Deschanel is the latest star to help promote Pantene’s hair products. The actress will star in the company’s Beautiful Lengths campaign, which promotes the charitable donation of hair to help cancer patients going through chemotherapy.

In a print ad for Pantene, Deschanel looks exactly as you would expect — wide-eyed and twirling her hair in a uber-feminine outfit with ballet flats.

After I found out that I would be working with Pantene, I was doing research on the company and came across Beautiful Lengths and got really excited”I wanted to be a part of it, Deschanel said. It’s about getting people to donate their hair to make wigs for people who are going through chemotherapy, which really affects people’s pride.”

The actress admits that she is unable to participate by chopping off and donating her own long locks because of work obligations.

I haven’t had [a major cut] in a while because I have to keep my hair a certain length. So probably about 10 years ago. I cut it off right before college into a Louise Brooks bob.

Deschanel has also recently been named one of People magazine’s World’s Most Beautiful” people. She posed makeup-less for the spread, proving that the New Girl cutie looks just as good au naturel.