Wondering about your guy’s sexual history? Now you can skip the awkward So, what’s your number? minefield, provided you know his name (sorry drunken one-nighters, you’re out of luck).

Men whose names end in ˜s’ get busier than the average bear, says the new French dating website Smartdate.com. The website conducted a survey of 19,300 male members asking how many sexual partners they’ve had. The top 10 male names all had 10 or more lovers, while the average male’s is 5.2.

Seven of the top 10 names ended in ˜s,’ number one being Francis (yup, you read that right). But name variations didn’t count as one score: Tom and Thomas snagged separate spots in the top ten, at numbers six and 10, respectively.

But if sexed-up players don’t tickle your Francy (it needed to be said), we have the top 10 least experienced – or perhaps most monogamous – male names for you, too.

Edward landed in last place with an average of 1.1 sex partners (hold on to that extra 0.01, Edwards). And mere decimal points above Edward to round out the bottom five were Dylan, Franck (with a c?), Jason and Grant.

Had a good laugh at the men, ladies? Good. Now brace yourselves, because we aren’t off the hook either.

Smartdate previously did the same survey for women, and found that women whose names end in ˜a’ do the no-pants dance more often than others, said Smartdate CEO Fabrice Le Parc.

Le Parc didn’t give the survey’s full details, but said that eight of the top 10 female names who have the most sex ended in ˜a.’ Vanessa took the top spot with 10.2 lovers, while Angelina was second with 9.8.

Did any of the men in your life place? Pass it on if your ex’s name is Edward. 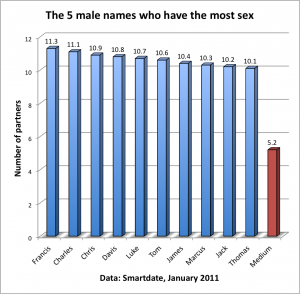 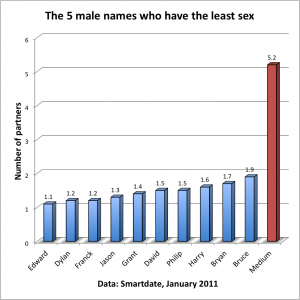 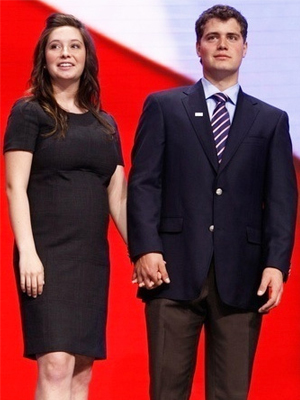