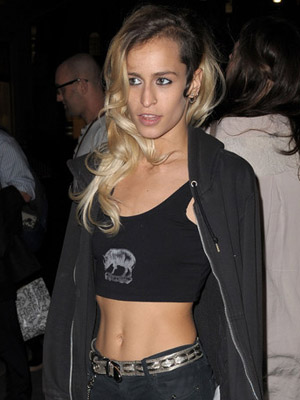 If you’re not sure who Alice Dellal is quite yet, consider this your formal introduction: after about a week of speculation, the British model has been named as the new face of the Boy Chanel handbag collection.

In a statement, Chanel explains that Karl Lagerfeld has been enamoured with Alice Dellal for some time – which of course means that we, the public, are probably going to follow suit.

“[Karl Lagerfeld] had a crush on this unique, charismatic young lady who is both a model and musician, during a photo shoot several months ago,” they said. “This previously unforeseen alliance finally became self-evident. Alice Dellal represents the perfect incarnation of all that is unique about the Boy Chanel handbag collection, which strives [to be] far from conformist notions of feminity.”

Which, as we’re all well aware, is all the rage. And considering Alice Dellal is the alternative culture poster-child with her half-shaved head and affinity for unconventional fashion, it makes sense that Uncle Karl plucked her up for such an important campaign. (That, and she’s arguably “hip”.)

Alice Dellal was photographed in cream Chanel frills for the Boy Chanel collection that will be released globally in March.

Wonder if we’ll see Alice and Blake hanging out with their favourite Uncle anytime soon. I Will Watch This, You Can’t Stop Me: A Selena Gomez Biopic