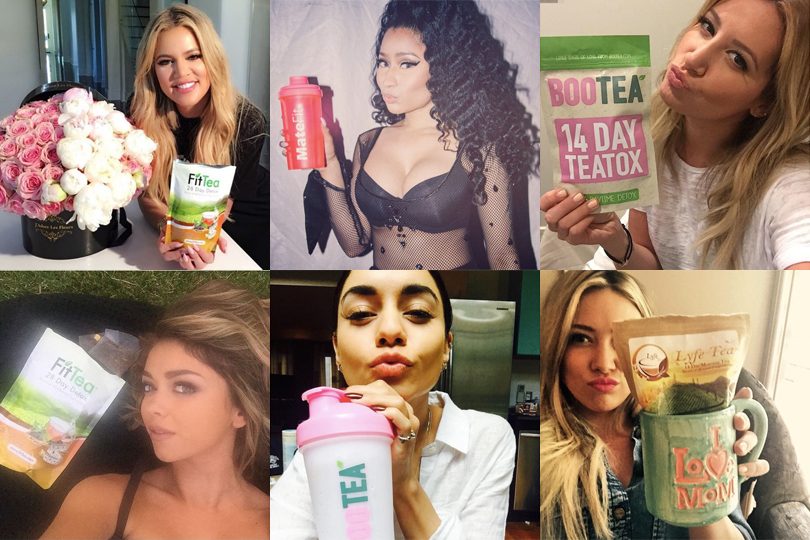 I remember the first time I saw Kim Kardashian promoting lollipops on her Instagram that suppressed hunger to prevent her from snacking. It infuriated me because I would personally never want to replace any sort of food with a magic lollipop. Recently, The Good Place actress, and vocal body positivity activist Jameela Jamil went on a rant on her social channels about celebrities, and social media infulencers selling diet supplements through Instagram and other social media platforms. Shakes, teas, and hunger suppressant lollipops have been making the rounds on social media for a while now, with the likes of Kardashian/Jenners, and various Victoria’s Secret models, and Cardi B promoting them as a way to attain their signature bodies. The problem is that they’re actually selling a super unhealthy way to shed pounds.

After the swarm of Black Friday promotion posts had started popping up, Jamil popped off with a tweet that read “Give us the discount codes to your nutritionists, personal chefs, personal trainers, airbrushers and plastic surgeons you bloody liars.” Aside from being hilarious, the tweet was also incredibly poignant.

Recently Cardi B credited her post-partum weight loss to a detox tea. Meanwhile, what is most likely going on behind the scenes is vigorous exercise with a personal trainer, meal prepping from a personal chef, and if we’re going to spill some real tea, probably a bit of plastic surgery too. We’re certainly not here to shame celebrities for wanting to look snatched 2 weeks after giving birth to a eight-pound baby. I get that looking a certain way is a very big part of their job. All we’re asking for is a bit of honestly. Because honestly, if all Cardi B was doing to lose the baby weight was drinking laxative tea morning, noon, and night, she would have probably perished from dehydration by now. That’s the thing about these products that are being mass-marketed to us; they’re just not healthy the way they’re being advertised.

A lot of people may think they’re buying a tea that will magically make them skinny, but what they don’t realize is that what they’re actually buying, and consuming is a laxative. And if they’re not careful, could be really harmful in the long run for their bodies, and overall health. It’s impractical to expect that a drink will totally transform your body.  I’m not really in the position to be a “health and wellness expert”, but if the idea of hunger-suppressing lollipops sounds like a good idea to you, try carrying a healthy snack around instead. I make it a point to always have at least one healthy snack in my purse in case I’m feeling hungry. Can I interest you in a granola bar, or maybe some almonds, or perhaps some dried fruit? If your body is telling you it’s hungry, you need to feed it. Pushing those feelings of hunger down damages your metabolism, and may lead to a much bigger problem.

Jamil, who has been very candid and open about her struggles with an eating disorder as a young adult has made it her personal mission to expose the truth behind these products that are being sold to new moms, and young women. Following her tweet, Jameela posted a string of videos of her promoting fake versions of the products honestly. While standing in a gorgeous dress, she suddenly darts off camera and the next scene sees her finishing her #AD from the bathroom. In another rant, she asked the viewers if they knew that what they were buying were in fact, laxatives. She then went on to explain how dangerous it is for people with such large platforms to be selling these products while a lot of the people they’re selling them to are impressionable young adults.

Something that I have always wondered was why Kim Kardashian, really needs to be pushing an up-and-coming, albeit slightly suspect product on her socials? How much is she gaining from this? How many people are really buying it? And does she really, and honestly use the product? I don’t think she really does use the product. I have a strong feeling her expensive Calabasas nutritionist probably told her that consuming such a product would be really bad for her. So what gives, and why does she have a hand in selling it? I respect the hustle, especially those of female businesswomen, but what’s wrong with being honest with our audiences? Kim Kardashian and Cardi B know a lot of their followers are young people that are extremely impressionable. Young women and men that are going through that that phase in life where they might see an ad for tea that claims to make their bodies look a certain way, and they might just buy into it.

Unfortunately, it doesn’t look like the sale of these products on our social media feeds is going away anytime soon. We have to be careful when looking at what celebrities and influencers are trying to sell us, and remember that a lot of the time, the reason somebody is selling something isn’t because they actually like or use it. In the age of social media marketing, we have to be a bit skeptical of everything being sold to us. Ask questions, do your research, and if you’re feeling a little fed up with it all, take a page out of Jameela Jamil’s book, and call people out. If after all this, you still want to buy Cardi’s detox tea, please make sure what you’re buying is safe for you to use.