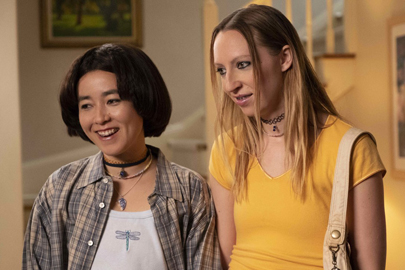 The early 2000s are having a major moment right now. Bucket hats are back in stores. Tiny sunglasses and chunky platform shoes are this season’s must have accessory. And much to my personal chagrin, low-rise jeans will soon seek vengeance and ruin all of our lives once again. If you’re a proud millennial chances are you reached your pre teens at the height of the new millennium, or soon thereafter. Recently, I found Hulu’s new series Pen15. It’s a female led comedy that follows comedians Maya Erskine and Anna Konkle playing themselves as 13-year-olds entering middle school in the year 2000. Pen15 is nothing short of pure magic as it reignited memories of what life was like 19 years ago that I had since forgotten. It’s been so long since the days of chat rooms, instant messenger, and gel pens. Aside from the pure nostalgia of material goods from the year 2000, the show highlights another important aspect of growing up: being a pre-teen.

While I don’t think anybody would want to be a 13-year-old again, you have to admit there is something pretty magical about that season of life. When you’re 13, you know everything about everything, and the stuff you don’t know about, you ask your best friends, or get misleading information about online. Parents are the worst, and your best friends are your family. Life has never been so confusing, and everything is just so hard. Ugh.

Whenever you are forced to think of yourself as a 13-year-old, it’s usually met with a knee-jerk reaction of shame and embarrassment. Everything was a terrible decision. From the outfits, to the thick side bangs you probably cut yourself in your bathroom (I see you, I was you), to the people we had ride-or-die crushes on (yikes). We were so sure at the time we were making the perfect, and exact right choices that would make us happy forever. The magic of Pen15 is that as an adult that has lived through the same experiences, we can look back and appreciate our blind optimism of the time. As Anna and Maya navigate life through their early teens they deal with crushes, bullies, finding love on an AOL instant messenger chat room, family drama, and they do it all with their strong female friendship as the anchor for every storyline. Being 13 was tough for everybody. If you can’t immediately think of something absolutely cringe-worthy that you did in your early teens, you’re lying to yourself, and I don’t trust you.

Watching Anna and Maya was like re-discovering all of the painful, albeit hilarious circumstances 13-year-olds (specifically girls) tend to find themselves in. Teaching themselves/each other how to kiss, discovering their sexuality, and wearing a thong for the first time, are important milestones that we’ve all lived through in some capacity or another. We can choose to forget these truly painful, and awkward time of our life, or we can embrace and appreciate it. There can be something sort of comforting reflecting on yourself at your most vulnerable.  After all, those experiences shaped who we are as well-rounded, and extremely cultured adult people. This show tugs at your heartstrings not only for the characters, but also for yourself, because at some point, you were in the same situation of having to break up with your first boyfriend after a lengthy two-week relationship via note passing.

Aside from low-rise jeans, crimped hair, and Baby G watches, the heart of the show most importantly, is the unbreakable bond between female friends. Maya and Anna are inseparable, and despite having a few fights, they remain each other’s biggest support systems through the trials and tribulations of becoming women. I’m fortunate to still have close relationships with a lot of the friends I had as a pre-teen. They are truly the gatekeepers of all my darkest secrets, and we’ve also lived through each other’s highest highs, and lowest lows, and we continue to do so, much like the characters/stars of the show.  So as much as that time in our lives were turbulent, and uncomfortable, and embarrassing, we should look back, and take the time to reflect on the awkward teens that we once were, and how they shaped the adults we’ve become.