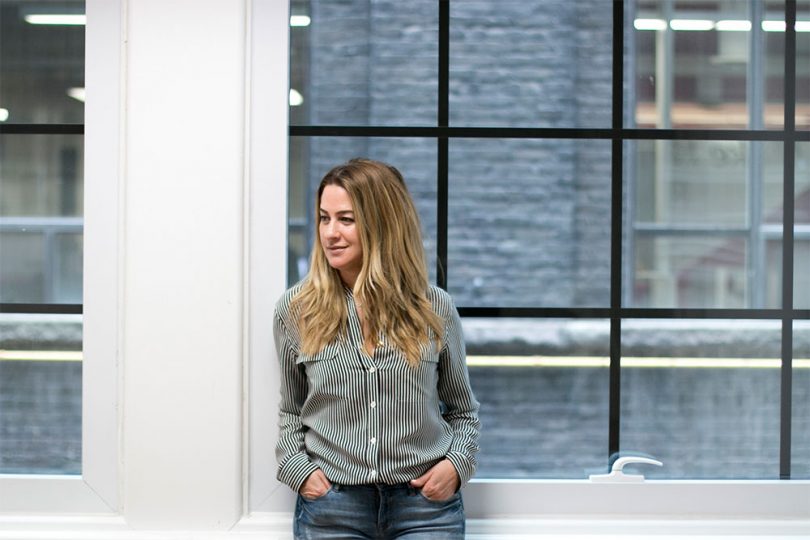 If you’ve been online for more than a couple years, you’ve probably heard of Sweetspot or Eluxe. But you might not know the woman behind the brands, Joanna Track. Quitting a job in advertising to enter into a world of digital content, is pretty par for the course these days, but Joanna Track was one of the first to be truly successful at it back in the mid oughts. Now, she’s starting something new. Again. Read on to hear about her new venture, The Bullet, and how today’s landscape needs to include a more political approach than ever before.

29 Secrets: First off, tell us about The Bullet, your new venture.

Joanna Track: It’s a daily email publication that rounds up the national and international news in a very simple, lighthearted fashion. So basically taking the news and simplifying it and adding a dose of humour, where appropriate. We cover all news categories from politics, business, tax to health, entertainment, and we even have a section every day which is the daily “What The Fuck?” which is basically oddball news stories.

How and why did you decide to start it?

There were a few factors that led me here. One, my background was, Sweetspot, my original business was where I fell in love with content and digital publishing production. Sweetspot also started as an email property, so it’s always been a space that I love and am passionate about, and where my experience is. From that perspective, it was a natural fit. Also, I had done Sweetspot and then E Luxe, and for the past three years, I’ve been consulting. While it was rewarding to help clients achieve their own business goals and dreams”I keep giving the analogy that I felt like an over-qualified water girl. I was supporting other people but I wasn’t in the action anymore. After three years I really started to miss it, so I knew I had to go back to building my own brand and producing my own content. It was that personal need to build something again, coupled with trying to find something that I was passionate and felt good about. The third factor was seeing this trend in the US of businesses like this popping up. There’s tons of them, but there’s a few notable ones that are having great success.

You don’t necessarily just focus on women with The Bullet, but there is an element of news for women to the brand. Can you talk about that a bit?

To be honest, when I first started conceptualizing The Bullet I went to great pains to be gender neutral. I felt a bit pigeon-holed because everyone expected me to be women-focused because of Sweetspot and E-Luxe, and I thought”unlike those which were fashion and lifestyle”, the news is the news, so why not be gender neutral? Even my selection of brand colours, and the name, I tried to walk the line.

But what I have seen in the uptake of subscribers and the interest is that it is definitely skewing female. And I think that the reason is, I believe (without any hard scientific research), is that women like to consume content a certain way, and I think we deliver on that. When I say the world simplicity, that’s not condescending, they are happy with simple language. I think the men are looking more verticalized”they want to go deep into sports, the want to go deep into finance, whereas what women are looking for is the roundup. Give it to me straight and make it quick.

I hate using the term work-life balance, but they’re struggling more with getting it all done and the time management. Men aren’t necessarily better time managers, but they’re less worried about being all things to all people. And so, The Bullet solves that issue for women, that men just don’t have as much. So you know, I speak to a lot of women who read The Bullet who are always running around, and they don’t have time to go deep into news”whether through newspaper, online or TV. So we give the news straight and simple, and with a little lightheartedness that makes it a little less depressing.

Obviously, we’re living through a time where politics are very gendered”there’s both an uptick in vocal feminism but also renewed attacks on women’s rights”is that influencing how you’re covering the news?

I think so. I speak from my personal experience, but I think that five years ago, I myself would put my head in the sand. It was complicated and confusing and (lower p) political”it was overwhelming and I often stuck to sitcoms and reality shows. But I think it’s impossible to ignore anymore what’s going on. For me, as the producer and the audience, I’m hoping we’re helping women be more informed and that they can speak to these subjects. You cannot go into a social setting these days and not have political discussion come up. You need to be informed and you need to have a point of view”and the way women are going to rise up in this it to have a voice. And you can’t have a voice if you don’t know what you’re talking about.

You’re an entrepreneur a couple times over”can you talk about the desire to make that move? To be you own boss?

It’s crazy. It’s the best of times, it’s the worst of times. All the tantalizing reasons to become an entrepreneur are real. You’re your own boss and you carve your own destiny and there are upsides”all those things are true. But you also wear the weight of the world on your shoulders. And you’re not guaranteed a paycheque. As much as when you work for a company it can be frustrating at times, someone else is telling you what to do, and they usually take the fall when things go wrong. When you are your own boss, there’s no one to pass the buck to.

I think sometimes people have visions of entrepreneurship being a bit more exciting than it is. That said, I obviously am very much excited by it. I mean, I keep doing it. And a lot of why I did get started is because I was growing up in my career in the advertising industry, and even though it was a female-dominated industry, all the senior people were men. That already gave me a bad taste in my mouth”it didn’t send a good message. I wasn’t really ready to follow that line. The women were working so hard but just spinning their wheels. And I didn’t want to do that. No matter how hard you worked the reward was very capped.

Do you have any advice for other women looking to jump out on their own?

Do your research. Research about the business you want to do, but also research about yourself. What are you really good at? What are you passionate about? Find the sweet spot between those two. There has to be a balance between something you really love and something you’re good at. You have to take a hard look at what your skills are. And you have to be really prepared for the sacrifice. Something is going to give. You can’t be stellar on the home front, stellar on the business front, and stellar on the financial front all at the same time. For at least some time. You have to be realistic about whether you can take that pain before the gain.

What are the challenges that women entrepreneurs face specifically?

There is a real challenge for women in this country to raise money. It’s demoralizing. When I first got into this industry, the glass ceiling didn’t concern me as much. I had done very well in my career, so I always thought you work hard, you move up. And then I saw it. I’ve actually had a potential investor ask me if I was planning on having more babies. Would they ever ask that of a man?

It always depends on the situation. Sometimes you need to bide your time and rise above it”not engage. But there are times where you need to call people on their shit. Even just saying to someone “that’s not appropriate,” or “I don’t appreciate that.” But you do need to call people on it. I mean, best case, they aren’t aware. But if they are aware they need to know they can’t get away with it. I remember, being in situations like that in university and early in my career where I didn’t say anything, and I wish I could go back and say something.

Is The Bullet neutral?

The stories are chosen based on how they’re trending”how they’re doing. But wherever possible we do try to promote stories with a female perspective. And, I mean, my staff is all female. It just happens to be that way right now. We struggle with balancing out Canadian versus world news. Of course the US stuff is so sensational, and readers want to read about it, but we work hard to include Canadian news stories. Even with the lighter stuff, when there’s great Canadian stories, we want to include them. We want people to know what’s going on here.