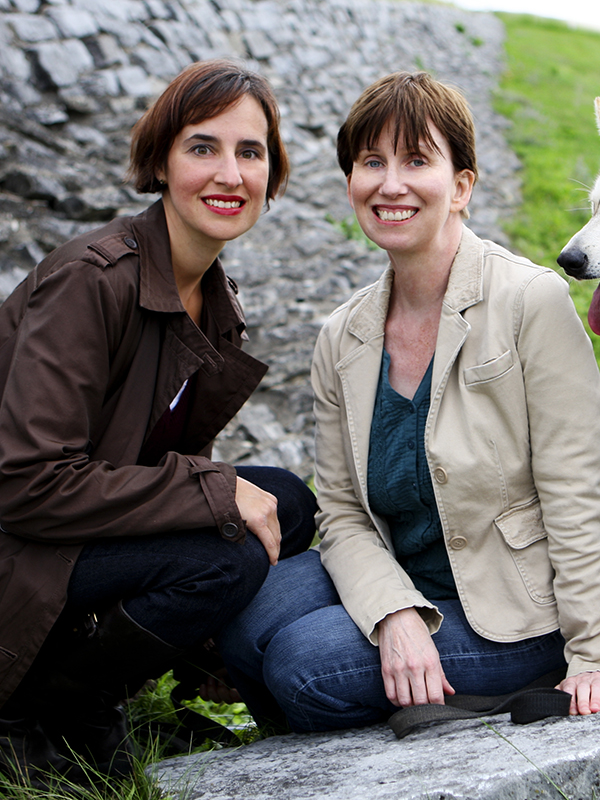 Co-authors Gina Buonaguro and Janice Kirk first met 11 years ago in Kingston, Ontario when they discovered their mutual interest in writing.  Since then they’ve collaborated on three books together, The Sidewalk Artist, Ciao Bella and their latest, a murder mystery, The Wolves of St. Peter's (in bookstores April 23, 2013). The duo have a fascination with Italian culture, all three of their books are set in the beautiful historically-rich country. We spoke with them about their writing process, the new novel and got some helpful insight for aspiring novelists!

29: How does a writing process work with two authors?

GB: Our writing process is a lot about talking.

JK: We would come up with a character and an idea and then both go away and work on the stories, then choose the best one. It is like working together really closely with an editor. I am really amazed that people are able to do this on their own.

GB: With The Sidewalk Artist we would write one chapter back and forth and then string it together. For Ciao Bella I would write the first draft and then Janice would take it to the next level. And for The Wolves of St. Peter's it was the opposite.

29: The books are all set in the past, how did you do your research?

GB: In The Wolves of St. Peter's I was doing more of the research and Janice was doing the writing. I had just had a baby during that process.

JK: I would send notes to Gina and say, “Was this person in Rome at that time?” And then I could continue with the story without interrupting the flow by doing too much research. Whereas for Gina it was a really good task for her at that time because she would have 15 minutes between feeding and naps that she could use to find out whether Raphael and Michelangelo were in Rome at the same time.

GB: The other aspect of being a writer that has really come into play in the last five years is the marketing and business of writing. You have your Facebook Page and your Twitter account and you have to set it up and maintain it. Talk to your agent, talk to the editor, so I ended up doing a lot of that.

JK: Which I am really grateful for! 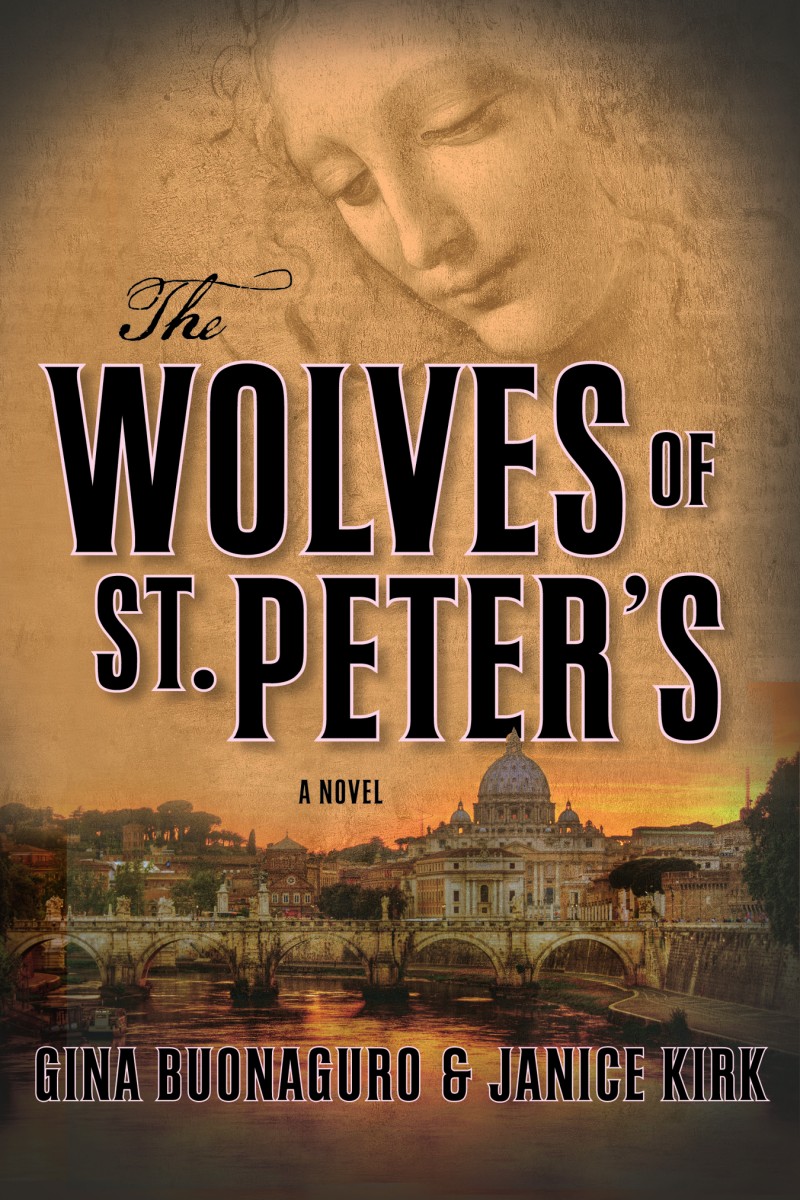 29: Did you travel to Italy to do your research?

JK: To celebrate 10 years of co-authorship we took a trip to Venice last year to do some research on Francesco’s (The Wolves of St. Peter’s main character) next adventure and at the same time we worked on a new book under our other penname Meadow Taylor called The Billionaire of Venice. We were researching and working on these two projects simultaneously, so it was a pretty exciting time. I think it is really important when you are writing to actually go to the setting and visit it, and take the time to really get it right. It makes your work feel authentic.

GB: Interestingly, with The Wolves of St. Peter's, Rome then was very different than Rome today. It was very medieval at that time and it has changed a lot. The book is set in the time when the Sistine Chapel ceiling is being painted, St. Peter's is being built. We both have been to Rome, but we had to rely a lot on research.

JK: The research we did on Rome for The Wolves of St. Peter's was fascinating. We found that Rome in the 16th century was not a friendly place. It was incredibly violent and not a great time to be a woman. When working on Ciao Bella, there is so little written about that part of Italy, let alone in the time period that we were writing in. We had to get really simple answers. What did they eat? What did kids play with? We didn’t want to make errors, so that if you were from that time and place, you would pick up on them. I spent an evening sitting with these old men on church steps and listened to their stories.

29: Tell us a little bit about what we can expect in your new book, The Wolves of St. Peter's.

JK: In one of the books we read about Michelangelo, it listed his apprentices that he had at the beginning of the Sistine Chapel project. It said he also had a house boy, but the name of the boy had been lost to history and that was the jumping off point for our main character, Francesco. A house boy would typically be 10-years-old and he’s the one who runs the errands. But, we thought we didn’t want to write about a 10-year-old, we wanted our detective to be an adult. So, we had to come up with a story about how our house boy, Francesco, was 20-years-old. And that became his backstory. We really loved the relationship between him and Michelangelo, the banter they have and how he loves to get under Michelangelo’s skin.

GB: We set this scene where Francesco has ended up in exile from Florence in Rome. The reason he is there is because he had fallen in love with his powerful employer’s wife. His boss tried to kill him and so his father sent him off to Rome. Michelangelo would only work with Florentines, so we built their relationship there. Francesco falls in with Raphael’s group, who is painting the Pope’s apartments. They often spend time at a high-end brothel. And in the opening scene, he finds a body of a prostitute that he knows. And that is where it all starts.

JK: The idea that began The Wolves of St. Peter's were paintings of Mary (“the Madonnas”). We got thinking about the lives of the women who posed for the Madonnas. They were often prostitutes or peasant women. We are so used to having images, on our cell phones and on TV. But, they didn’t have that, unless you had a painting. We also thought about the owner’s relationship to the Madonna. Did they picture the paintings as Mary or the woman who posed for her? Did they ever seek those women out? Did they fall in love with them? The prostitute that Francesco finds in the beginning of the book is one of these women.

29: Do you ever think about which famous actors would play the roles of your characters if your books were made into movies?

GB: Absolutely! In Ciao Bella, Frank was based on a young Owen Wilson. And Hugo was Gael Garcia Bernal. The Sidewalk Artist, Raphael is Johnny Depp!

JK: I pictured Francesco in The Wolves of St. Peter's as Timothy Olyphant from Justified. It really helps focus the character too because then you have the mannerisms and the voice in your head. All those things are so important. You have to be seeing everything through the eyes of your character. What would they notice? What would they say? You have to answer all those questions before you can make the character convincing. So you have to have a really good idea of who they are or they won’t come across.

The Wolves of St. Peter's by Gina Buonaguro and Janice Kirk is available in bookstores on April 23, 2013.

How to Stay Fit During the Holidays 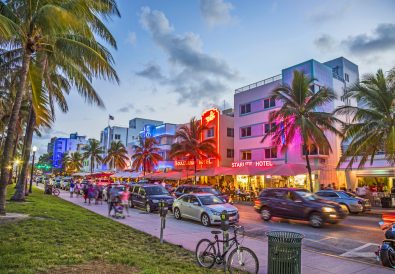