by Alexandra Donaldson
Style
No comments Mary Young‘s namesake lingerie and loungewear label first become known to me as many modern brands are”through Instagram. I was immediately smitten. As someone who prefers bralettes and bralessness to underwires and padding, Mary Young was a label I could get behind. Good thing that the woman behind the brand is pretty rad herself. Focusing on fits and textures that make women feel good and comfortable in their own skin, Mary Young is all about empowering women. She’ll start with designing you killer underwear, but you should take a read on what she has to say about being her own boss and why she’s passionate about her female community.

What made you decide to start your own business?

During my fourth year studying Fashion Communications at Ryerson University, I decided to pursue a double thesis consisting of a five piece womenswear collection of hand knit sweaters and lingerie. The concept behind the garments was based on the theory of pastiche and was influenced by many different areas of design from music to the literary world to past fashion design. The collection embraced a lifestyle feel, garments made to wear at home while lounging around but also practical for everyday wear. After studying the lingerie industry intensely for months I realized there was a gap in the market for lifestyle lingerie that encouraged comfort over sex appeal, which was a major influence to launch the company upon graduation.

In all honesty, I never thought I would design lingerie. During the beginning stages of my thesis I was studying the artist The Weeknd and made his albums a major part of the inspiration behind the collection. I envisioned the women I was designing for to be lounging at home on a slow Saturday listening to his music and creating a soundtrack to their life. From there I began to understand that traditional lingerie was mostly lace with lots of padding and reshaping aspects, something I personally do not agree with. I then translated lingerie into a more lifestyle design, featuring soft bamboo and mesh panels in figure flattering shapes that encourage women to embrace their natural shape rather than designing garments to reshape their body into what the industry defines as sexy. What experience in design did you have before your namesake label?

I studied fashion design at George Brown for a year and then completed my Bachelors Degree at Ryerson University. When it comes to lingerie drafting and designing, I am completely self-taught. I actually launched my brand four months after graduating Ryerson, so I haven’t had a full-time job other than working for myself. During school, I worked for smaller companies in fashion as well as interning for Gap Inc. where I learnt a lot about the ins and outs of public relations.

What’s your favourite thing about being your own boss?

I’d have to say my favourite thing about being my own boss is seeing all of my hard work come to life. As an entrepreneur, you’re constantly striving to do more and better than last time, so when weeks of work come to life, whether it’s a new collection or marketing campaign, all the hard work and late nights are completely worth it.

My least favourite part of being my own boss is making all the decisions, both big and small. It can be quite exhausting deciding every detail for a company, not only designing ideas but also how to grow and build a company. I definitely miss having direction from someone else but I’ve also been able to grow a lot while being my own boss and I wouldn’t trade that for anything. 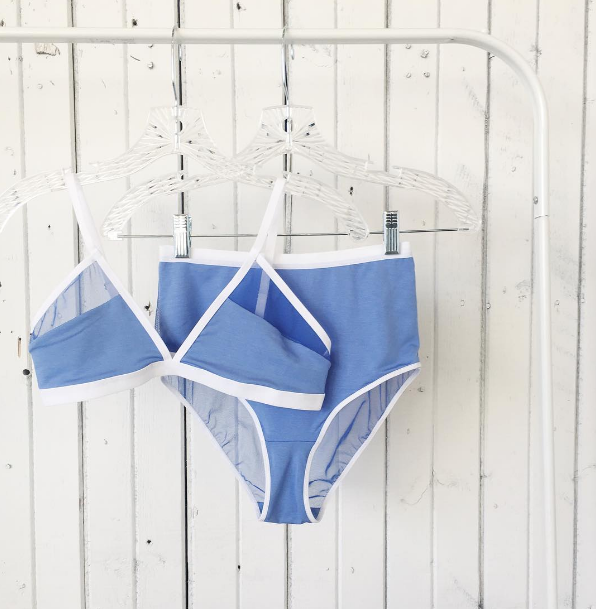 Not only are you a young female entrepreneur, but you’re also selling to (almost exclusively) women”what’s it like having such a female-centric business?

I personally love being able to connect with so many women, definitely a lot more than I realized I would be able to. It’s great to hear from other women that they feel empowered by choosing garments that work for their body and lifestyle. I also am so thrilled so see such a community growing among women, seeing the support and love amongst a generation is truly inspiring. One of the toughest things about being a woman in a female-centric business is being categorized as girly or not being taken as seriously. At the end of the day my gender and my category of product doesn’t relate to my success as an entrepreneur but in society, it often is noted first rather than last.

What advice would you give to women looking to make the leap to self-employment?

My best advice is if it were simple, then everyone would be doing it. A lot of people have glamourized the idea of being an entrepreneur when it’s very far from glamorous. There’s a lot of hard work, focus and perseverance that is often unseen. I would suggest making a plan, whether it’s a structured business plan or a break down of the goals, to really make sure you have a clear direction and vision. That will help you realize if you’re ready to make the leap. When you feel 80% confident in your idea and plan then take the jump. You’ll never be 100 per cent ready so don’t wait or you’ll never go for it.

Do you have any tips for budding entrepreneurs?

A big thing is experimenting and it’s not often talked about. A company may be able to grow rapidly with the use of social media but that doesn’t mean yours will. You may need to bring together a few different marketing techniques to find growth. Really build a strong brand, if you are clear and direct on your messaging then your consumers and community will easily be able to relate to it and contribute to your brands growth. Try out different techniques and when you find one that works, stay true to it. Consistency is really important when building a brand”have a clear and solid voice and always communicate with your community.

What would you like to see in the future for women in the workplace?

I would love to see the community of women supporting each other to continue to grow. It’s definitely starting but there’s a long way to go. Unfortunately society has taught women to look at other women as threats or competition rather than as support and allies. The shift is happening where women are coming together to not only work together but also to support each other. The Best Denim Buys for Fall, From Skinny To Cropped