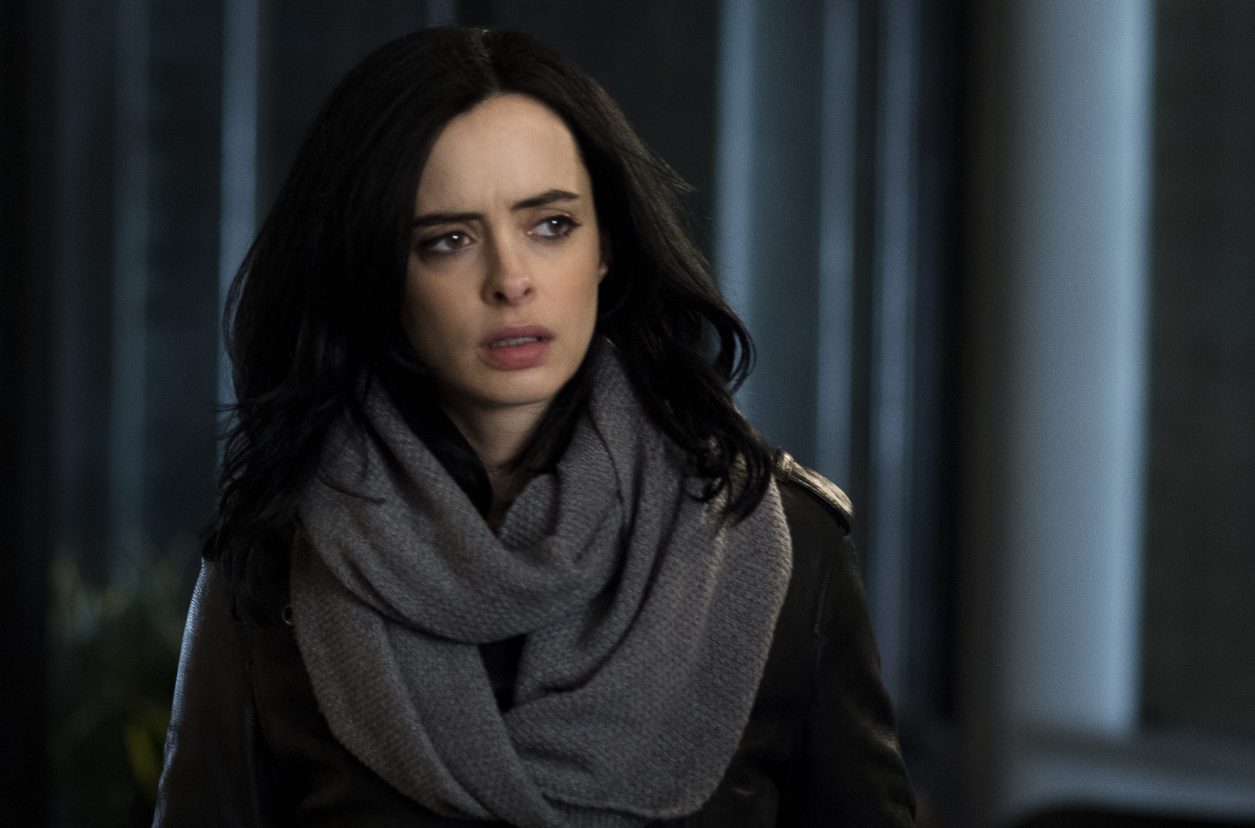 I spent this past week rapidly binge watching Netflix’s latest hit series Marvel’s Jessica Jones and as my marathon continued on for hours upon hours, I found myself feeling wildly nostalgic for my late ’90s teenage years of yonder. Particularly, my teenage years that involved enthusiastically ingesting new episodes of Buffy the Vampire Slayer on an actual television set at a specific time every single week. Appointment viewing existed so long ago that at this point it almost feels like it belongs to an alternate reality, one that I transported out of decades prior and have wiped from my memory.

As soon as I noticed a couple of similarities between the Jessica Jones New York Marvel universe and the Buffy Summers Sunnydale WB universe I couldn’t un-notice the similarities. I started seeing more and more comparisons on a large scale and on a small scale. With every scene I observed I noted each moment where I thought Oh. This reminds me of season two when Angel¦ or This relationship is just like Buffy and… or I am going to masturbate to this and… then I did, just like when I bought the DVD box set of Buffy‘s season six (or should I say season SEX) and ferociously pleasured my clitoris for weeks to come (PUN INTENDED BABY).

So, being the Buffy nerd that I am I began to write down the specific parallels between the two and soon enough I had enough relative points to fill a PhD dissertation. Side note, apparently Buffy the Vampire Slayer is being studied at colleges and universities across North America these days. My 14-year-old self jumped up and down upon receiving that information. Are there specific courses dedicated to Anya’s incredible character arc? Is the Once More, with Feeling episode considered a masterpiece that should be dissected until the end of time? Do professors refer to themselves as The Master or The Judge or The Mayor as a joke but also as not a joke at all? Do students dress like Cordelia on Fridays and Oz on Tuesdays? DOES ANTHONY STEWART HEAD SOMETIMES SUB IN AND LEAD THE LECTURE? I NEED TO KNOW.

But, I digress. Please find below my essay titled Why Jessica Jones is the new Buffy the Vampire Slayer”

Just like Buffy Summers, Jessica Jones isn’t your typical honourable, idealistic, moral saviour. She’s more stubborn, sardonic, rebellious, and often annoyed at basically everything and everyone she encounters. Although the slayer is a tad less sardonic, a tad less annoyed and a tad less rebellious, she’s definitely stubborn and definitely lacking the boring qualities of the archetypal hero. They got the whole I don’t follow any rules ever attitude locked down. Plus they possess the most important characteristics needed for a champion. Like fearlessness and selflessness and babe-liness. Both gals are hella easy on the eyes and I can’t help but swoon each time I witness them break a mean man’s neck. They’re perfect exactly as they are. Who wants some super ethical, dull, predictable fighter of evil anyway? When we could have wisecracking, pissed off, no bullshit women? I know I prefer the latter always and forever. 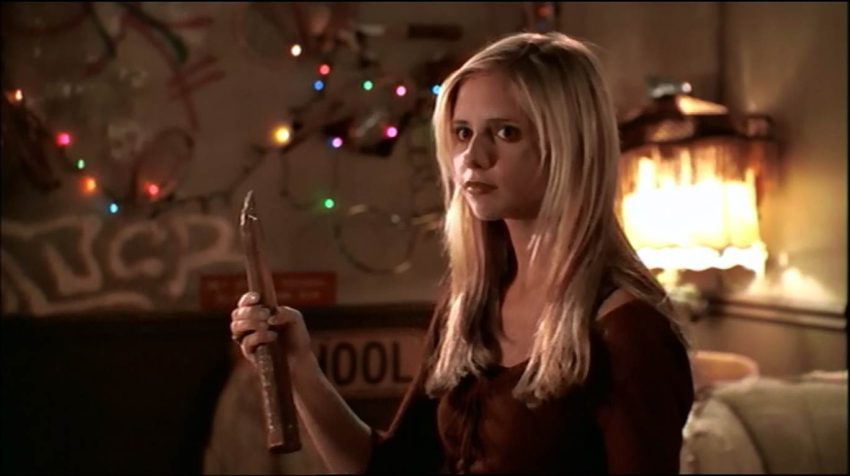 Her powers are mostly super strength

Jessica Jones can’t turn invisible. She can’t shoot lasers out of her eyes. She isn’t telepathic. She can punch things super hard though and heals real fast and can jump crazy high (she can even fly at moments). Other than the flying element, her powers are identical to Buffy’s gifts. Also, they’re both tiny young women who everyone underestimates until they beat them to a pulp.

She doesn’t wear a uniform

Like Ms. Summers, Jessica chooses to keep things casual and prefers street clothes over any kind of ridiculous, cartoony costume. She very much lives the life of a regular person, minus the fact that she doesn’t actually live that life at all. And like old Buff, she’s got killer style.

She didn’t choose this life

Jessica didn’t train like Batman and beef up and get mega-coordinated so she could start taking down the bad guys in town and rescue humanity over and over again. She was in a sense cursed with her talents. It was thrust upon her suddenly when she was a troubled teenager. WHOSE ORIGIN STORY DOES THAT REMIND YOU OF? OH I DON’T KNOW. MAYBE THE OTHER NAME I’VE MENTIONED IN THIS PIECE TWELVE TIMES ALREADY. Also, she and Buffy both struggle with NOT wanting these abilities pretty frequently but eventually succumbing to their destiny and their responsibilities and their blah blah blah.

She’s got complicated relationships with men

I mean, I doubt I’m not the only one to notice that Luke Cage is basically Angel. They’re brooding, taciturn men who are extremely hot and extremely strong and extremely infallible. Just as Luke can be shot and survive, Angel can do the same. They’re also dudes with a ton of baggage, particularly in regards to ex-girlfriends. Jessica battles her desires towards Luke slightly less than Buffy battles her desires towards Angel, since you know, Angel goes all evil when she gives in. But, hey, remember when Luke went all evil himself because an enemy screwed with him? FAMILIAR STORY, NO? Also, there is nothing sexier than watching either of these duos destroy villains together. I could masturbate to that image for hours (AND I DID!).

There technically isn’t a portal to hell underneath the surface (although anything is possible) but the general tone of the city is Sunnydale-ish. It’s not small town. It’s big city. But it’s a land of malevolent disaster and like the Buffy-verse the supernatural forces go far beyond the geographical confines of this setting. It’s not just this one location. It’s the WHOLE WORLD.

There’s a big bad every season

I mean, I doubt I’m not the only one to notice that Killgrave is basically The Master. Of course the former is not a blood sucking demon of the night, but he’s close enough. He also possesses a control over our hero like no one else does. And The Master has mind control powers of his own. Remember how Buffy died for a hot minute in the first season? Yeah, that was ˜cause of him bossing her brain around, and him biting her a whole bunch too. The series seems to have a similar structure too. Killgrave was this season’s main jerk, and I have a feeling next season will feature the weird military organization that Will Simpson gets his anger meds from. Can we say season four of Buffy when she’s facing The Initiative? Yes we can, and Buffy’s boyfriend Riley who works for them is also blonde. HOLY COINCIDENCE? I think not…

Jessica’s got her own support system that often force their help upon her despite her many protests and that system has corresponding Buffy peeps. Trish is naturally Willow. She’s not as nerdy but she’s tender and loving and has got her own unique abilities that get Jessica out of many a jam. Malcolm is Xander. Neither of them have any kind of powers, but that doesn’t stop them. They have Jessica’s back no matter what. Jeri Hogarth is a more wicked, less nice, extremely selfish version of Giles. She’s older and wiser and more organized than Jessica is and disapproves of A LOT of her choices. But she has also saved her ass a ton and advises her constantly. I wouldn’t say that she’s a motherly type like Giles is a fatherly type but I will say that both use their big brains to assist. Also, Hope has sort of a Dawn thing going on, no?

She saves the world¦ a lot

I know that’s kinda both of their jobs, but like, Jessica’s buds would for sure put that on her tombstone too. I know they would because like Buffy, she has awesome buds. If only the two of them were best friends too. Ah. That just happens in my sweet, sweet dreams. 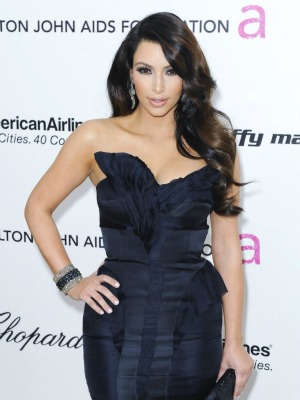 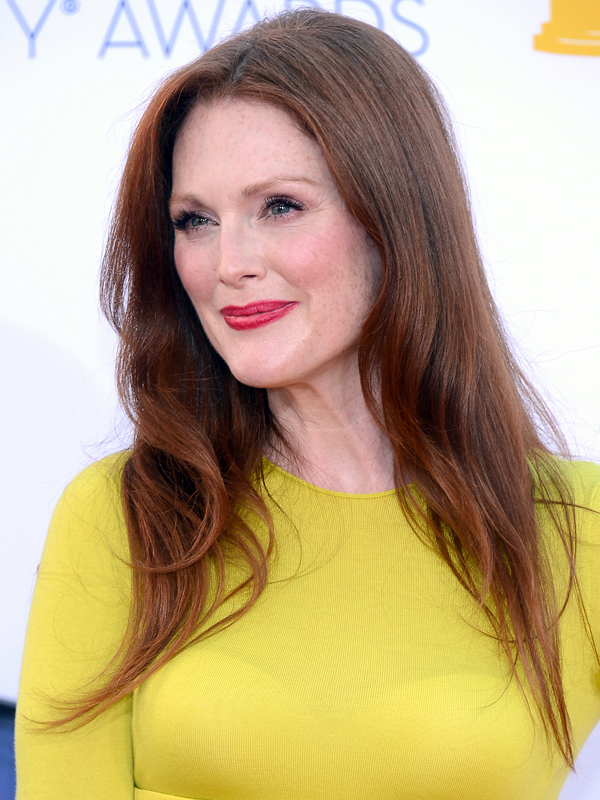