I love Christmas as much as anybody who says they love Christmas. So: a lot. I love it a lot. But I've also gotten older. I've become wiser. For nine years, I worked in retail during the holiday season, so yeah, my feelings about Christmas have changed.

I don't want to say I'm a little more cynical, but I am going to say I'm a little more cynical anyway because it's an accurate descriptor. I still love friends, family, food, gift-giving, looking at other people's decorations (I'm a lazy person, you guys — you wanna put decorations up at my house, you go for it, otherwise we're just getting a tree), and some music that Christmas brings, but that's it: some music. Not all. Not even close to all. Frankly, if you say you love all Christmas music, you are a liar and also a sociopath. You don't love all Christmas music. That's impossible. That's like saying they love all music. That's bullshit.

And do you know what else is bullshit? ("No," you think to yourselves. "Please tell us because we've already come so far!") These Christmas songs. CORRECT, friends. I am waging war on certain parts of the holiday soundtrack that deserve not just to stop being played, but never deserved to be written, ever. And you agree with me. I know you agree with me. You have to. Because together, we can do this. And separately, we'll be forced to endure another season of "Christmas Shoes."

Here goes everything. (This is my life's work.)

1. "Christmas Shoes"
Fuck this song. Oh my GOD, fuck this song so hard. Do you know what this song is about? Death. It's about a child's mother DYING and that child needing a pair of shoes because the family is so in need that nobody can afford shoes. MERRY CHRISTMAS EVERYBODY. "Put on 'Christma Shoes' so we can capture the jovial nature of Christmas!" said NO PERSON EVER.

2. "Santa Baby"
Gross. Just gross. Why does Madonna sound like a baby? Also, why is this song allowed? Whoever's singing this song is an asshole. Do you know what I'd like from Santa? This song to be erased from history. The era of Sexy Babies to be over. How do I say THAT in a song? Or more specifically, how do I say it in a song without SEXUALIZING AN OVERWEIGHT MAN IN VELVET PAJAMAS. (He's not even a real man, you guys, he died so many years ago!)

3. "Do They Know It's Christmas?"
Nope! They don't. Why? Because the subjects who are supposed to be "they" in this scenario do not live in the western world (they live in Ethiopia) and they likely practices other beliefs and have other traditions. And also: who cares if they know? Why is Christmas the reason Band Aid wants to feed the people of Ethiopia? What the hell does Christmas have to do with it? Shouldn't we want to feed people EVERY DAY? Or, more importantly, shouldn't we check our savior complexes at the door because those have only HURT EVERYONE ON THIS PLANET SINCE WE GOT THEM? This is the most condescending song I've ever heard in my life, but The Guardian just did a better takedown than I ever could. Morons!

4. "Wonderful Christmastime"
This song is fun for approximately 30 seconds and then it's just like, "Why is it still happening?" And then it doesn't stop. It is never not on. Somehow, Paul McCartney managed to secure "Wonderful Christmastime" as a radio staple 24 hours a day, seven days a week since he recorded it in 1979. Oh, you haven't heard it yet? It's standing right behind you.

5. "Happy XMas (War Is Over)"
I'm sorry, but "So this is Christmas and what have you done?" is the kind of special guilt trip that talked me out of going to church forever. What have YOU done? (Not you, John Lennon.) (But also: YEAH. Sorry, John Lennon, but come on.) What gives? YOU DON'T KNOW ME. YOU DON'T KNOW MY LIFE. I HATE THIS SONG. YOU'RE NOT MY REAL DAD.

6. "Santa Claus is Coming to Town"
"You better watch out / you better not cry / you better not pout" IS THAT A THREAT? What, Santa isn't going to come if I show human emotion? What the fuck? Is this The Hunger Games? Am I volunteering as tribune? No thank you. I'm not a robot I'm a grown-ass woman. [Hunger Games whistle-sound.]

7. "Baby It's Cold Outside"
The man gets her drunk, won't take "no" for an answer, and then won't let her leave his house. So: a sexual assault anthem for the cold winter season. Noooo thank you.

8. "I Saw Mommy Kissing Santa Claus"
I didn't really give a shit about this song until my Dad told me that growing up he thought it was about a mom was having an affair with Santa Claus. And it reminded him of his own house where infidelty wasn't exactly some rare thing. So, fuck this song: you made my Dad upset as a wee tiny boy.

9. "Grandma Got Run Over By a Reindeer"
Every time this song comes on the radio I want to slow my car down to about 15 km/hr, open the door, roll out and watch as my car gently drives into a snowbank. Do you know who finds this song hilarious? THE WORST PEOPLE. Seriously: you have never met a person you liked who got psyched about hearing this song. You have absolutely heard people say they like this song, but you immediately thought to yourself, "Ugh yep OF COURSE you do" and then you rolled your eyes so hard you almost stopped having eyes altogether. This song is a test for friendship: if one of your friends likes this song, they aren't your friends anymore.

But that's enough about me. Add yours to the bottom! Let's make the ultimate DO NOT PLAY list to secure our Christmas season as the greatest one yet. (You're welcome.) 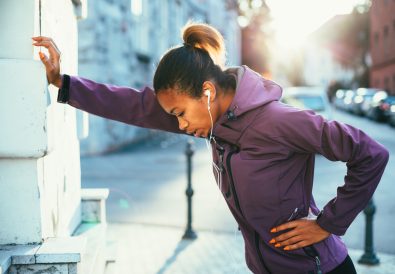 What to Do When Your Resolution Fails