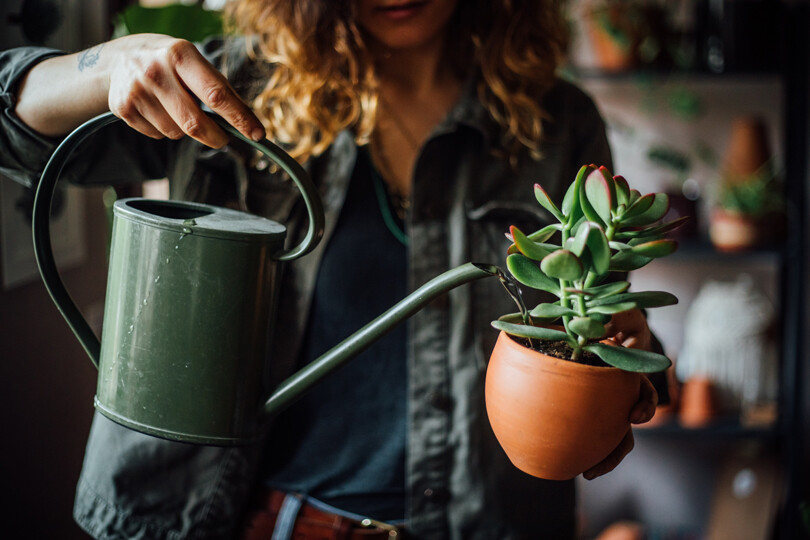 Full disclosure: I am a new plant mother. Up until 2019 I killed most plants with the ease of somebody very fluent in negligence and over-watering, and I was convinced I was doomed to roam the planet, killing all green things I dared to touch.

But alas, this didn’t happen. One plant at a time, I learned to be someone who respected these mystical entities while learning that screaming, “ARE YOU OKAY?” to a browning leaf is a completely reasonable thing to do. And so, I have chosen this week to pass my lessons forward. For most of you, they will be common knowledge. But for people like me, they may be the difference between your plant needing to sit on a paper towel in the sun to save the soaking wet roots and watching a vine take over your room, hoping its end goal isn’t to maim you.

Talk to your plants
Talk to your plants, but don’t burden them with your problems. They don’t care. They’re simply trying to rise out of the dirt and infringe on any and all spaces readily available to them. They are not your friends, they have a lot on their plates.

So tell them they’re beautiful. Tell them they’re strong. Ask if they’ve been born with it, or whether it’s Maybelline (it is not), and gently stroke each leaf to let it know that it’s special. Then, when anything’s amiss, begin scream-weeping and saying “What can I do? What can I do?” until you hear something whisper, “Put it in the sunlight or take it to the goddamn plant store.” That person is whoever you happen to live with. Plants don’t actually speak.

Do not dehydrate them but man alive, do not give them as much water as you drink
I thought I was past this lesson until two weeks ago when one plant of mine decided to die. I mourned it, thanked it, then turned to the other one that was barely hanging on. It had happened: I was so excited to be a good person and/or caretaker that I did the equivalent of forcing my plants to drink roughly 16 water full bottles out of love. This was a bad call. First, because houseplants live in houses where it doesn’t rain for a reason. And second, because I was specifically told not to water them more than once a week. (“Yeah, well, we’ll see about that” I thought at the time, knowing that because I liked drinking water, my plants would like drinking water too.)

But look, I’ve learned. And now I hope you will too. How often should you water your plants? I have no concrete answer to this because I have no idea what plants you have. But when the soil’s dry I go for it and spend no less than 72 hours, worried I did too much.

Hang with your plants outside, for the love of all that is good
Am I saying that you need to smear your plants with SPF and surround yourself with all of them like a strange royal monarch being greeted by the court? Not really. I’ve never put sunscreen on a plant, and it sounds terrible, so I will not. But bring those plants outside! What are you worried about? That they’ll see the ground and run away, hoping to escape its small life in a ceramic pot? Well, that would be fair. They might, and if they do, you can’t stop them.

But in reality, I like to think about how much better I feel when I get a little fresh hair and some sunshine. I feel terrible when I get sunburned and don’t drink anything and get sun poisoning, but half an hour outside? Fresh oxygen? Vitamin D? (That’s the vitamin, right?) How dare we not.

That is, unless a professional tells you otherwise. Please don’t consider me an expert.

Plants are not cat food
I’ll be honest: my cat killed a fern because he liked chewing on the ends. And while I’m actually not being honest at all because I just cut the ends off and it was my overwatering that ended this poor plant’s life, it couldn’t have been good for the plant to get so acquainted with cat’s spit. Cats can’t have everything. They can have most things, and they’re all my children, but man alive: put your plants out of cats’ reach. They love living things. And if I’ve learned anything from the way my cat attacks his octopus he is convinced is alive, they like to kill them even more.

Unless they know something we don’t. Unless they have seen the plans for a Jumanji-like takeover and are attempting to thwart it. Unless. But until I see first hand proof, I must protect the vines I swear play with my hair as I sleep at night.