THE STORY OF: Geri Halliwell And The Union Jack Dress 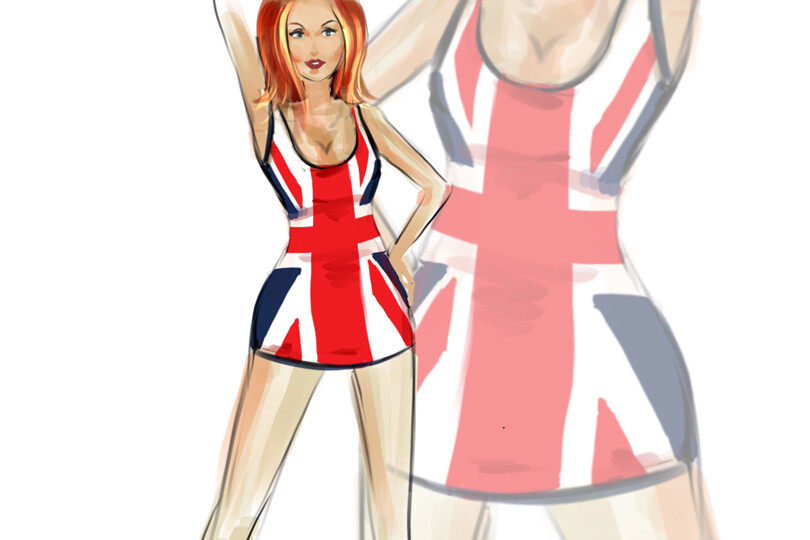 It has been more than 20 years since Geri Halliwell wore one of the most iconic and era-defining dresses in history. Halliwell defied industry advice the night she wore her self-made Union Jack dress to perform with the Spice Girls at the 1997 Brit Awards – and she landed on the cover of countless newspapers around the globe the next day, ultimately forging the Spice Girls’ image as part of a new wave of cool Britannia. The dress has also since gone down in history – along with Jennifer Lopez’s Versace Jungle dress, Liz Hurley’s Versace safety-pin dress and Princess Diana’s wedding gown – as one of the most memorable fashion moments of all time.

Funny how things end up working out.

The Spice Girls
In the late ’80s and early ’90s, the music scene was dominated by boy bands and grunge acts – that is, until five British girls captured the world’s imagination. Halliwell penned an essay for Marie Claire magazine back in July 2016 in which she explained how the girl group formed through an audition process in 1994. “I came across an ad in a trade newspaper called The Stage looking for ‘streetwise’ girls to audition for [an all-female] pop band,” she wrote. “I actually missed the first round of auditions because I was visiting my grandmother in Spain, but something told me to ring the managers behind the ad, Chris and Bob Herbert from Heart Management, to ask if they were still looking. They were.”

Almost 400 women attended the initial audition at Dancework Studios in London, England.After finding out the Herberts were down to 12 finalists, Halliwell went to the London for the next audition. “The girls who’d made the final round were split into two groups of four. Each group sang Stevie Wonder’s ‘Signed, Sealed, Delivered (I’m Yours)’ and performed a dance we’d learned for the audition,” Halliwell explained. “Before I left, one of the guys came over and told me I’d made it. I was elated!”

Halliwell, plus Victoria Adams, Melanie Brown, Melanie Chisholm and Michelle Stephenson, were selected to form a band that would be called Touch. The quintet moved into a house in Maidenhead, Berkshire, where they spent the majority of 1994 in training, writing music and choreographing dance routines. A couple of months into the training regime, Stephenson was fired and replaced by Emma Bunton. Shortly after Bunton’s arrival, Halliwell came up with the band name Spice after gaining inspiration from one of the songs they had recorded entitled “Sugar and Spice.” A rapper was already using the name Spice, so their name was eventually changed to Spice Girls.

In March 1995, the girls parted from Heart Management due to their frustration with the company’s unwillingness to listen to their ideas, and before the month was over the group had signed a new management contract with Simon Fuller of 19 Entertainment. In September 1995, the Spice Girls signed a record deal with Virgin Records.

On July 7, 1996, the Spice Girls released their debut single “Wannabe” in the UK. It became an instant hit, with the accompanying video being aired up to 70 times per week at its peak. The catchy song entered the British charts at number three before climbing to number one the following week, where it stayed for seven weeks. “Wannabe” became a global hit, reaching number one in 37 countries. It eventually became the biggest-selling debut single by an all-female group…and then the biggest-selling single by an all-female group of all time.

That was just the beginning. In September that year, Spice, the group’s debut album, went on to sell 31 million copies worldwide and is still the best-selling girl group album of all time. In October, “Say You’ll Be There” was released, topping the charts; in December, “2 Become 1” became the group’s first Christmas number one after selling 462,000 copies in the first week. The two tracks, combined with the debut “Wannabe,” meant the Spice Girls had three of the top five selling songs in the UK in 1996.

The big night
When the Brit Awards rolled around, it had been eight months since the Spice Girls exploded onto the pop scene. Spice-mania was approaching its height in the UK, and the Spice Girls had just cracked the US as well, reaching number one with their debut single and album. The Brit Awards, the UK’s equivalent of the Grammys, would give the Spice Girls their biggest gig to date.

The world was already obsessed with “Wannabe,” but everyone was talking about the always outspoken Liam Gallagher and his disdain for the group. A month before the awards bash, he was featured on the cover of Vanity Fair with his girlfriend, Patsy Kensit, and in the accompanying interview he promised he would “smack” the Spice Girls if he saw them at the upcoming Brit Awards.

Emma Poole, who managed the Spice Girls’ creative styling and marketing on behalf of their record label, Virgin, remembers the pressure of getting the band ready for the upcoming award show and of securing “amazing dresses” for each of the girls to wear to the Brits. In 2017 she told The Telegraph newspaper: “We were working with quite a big stylist at the time and I was like, ‘Oh my god, this is a really big worldwide thing. They’ve got to blow everyone’s socks off.’”

Except Halliwell had different plans. As Poole recalled, “Two nights before, Geri said, ‘You know what, Emma, I’m really not comfortable with the dress I’m wearing. I’ve got a much better idea. I’m going around to my sister’s – she’s got these great Union Jack tea towels. I’m going to make a dress.’ I thought, ‘Please, please don’t, no.’ And Geri was like, ‘No, I am going to do that.’”

Poole compromised. She said Halliwell could go and make the dress, and they would make the call once she had done it.

So, the night before the Brit Awards, Halliwell went to her sister Karen’s house and had her stitch one of her Union Jack tea towels to the front of the black Gucci dress as a patriotic gesture (Tom Ford was designing for the label at the time). Worried that it might come off as aggressively (and obnoxiously) patriotic, Halliwell also stitched an enormous white peace sign on the back of the dress, which, of course, was totally on brand with the group’s two-fingered salute to represent Girl Power. After they were finished, Halliwell decided that she would wear the dress on stage to perform and then slip on something different after the performance.

On February 24, 1997, the 17th annual Brit Awards took over Earls Court Exhibition Centre in London. When it came time for the Spice Girls to hit the stage, host Ben Elton enthusiastically did the intro: “Yes, we all wanna be their lover. We’re more than happy to be their friend, then get with their friends. They are, of course, Ginger, Sporty, Scary, Baby and Posh. The all-conquering Spice Girls!” 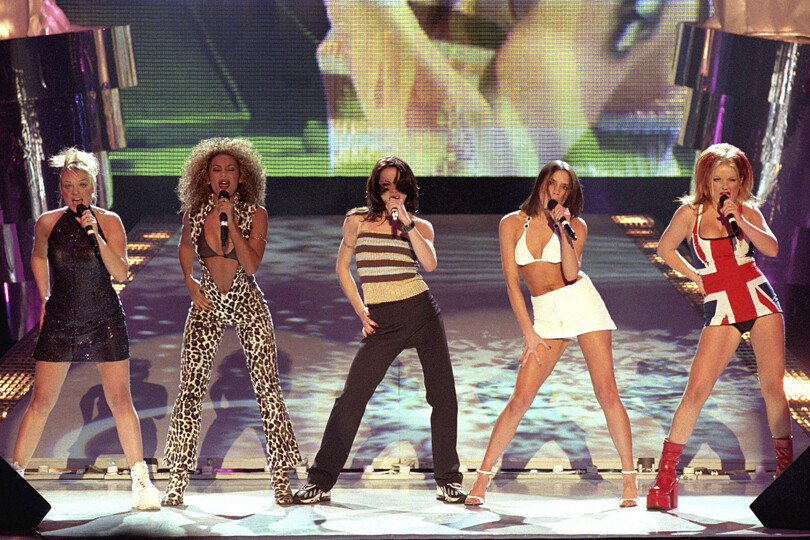 A video montage set to an excerpt of “Wannabe” played before the girls burst down the stage with a lip-synched rendition of the disco-infused “Who Do You Think You Are,” which would go on to become the group’s fourth consecutive chart-topper. The group had just returned to the UK from an exhausting promotional tour in the US, but even though this gave them just a few days to rehearse for the performance (with famed choreographer Priscilla Samuels), that night they hit every single move like pros. 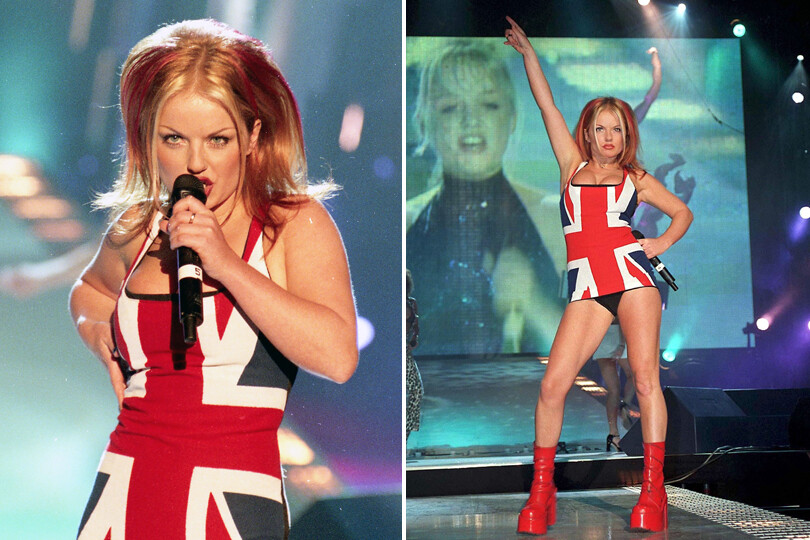 Of course, Halliwell’s Union Jack dress – so short it flashed her black knickers – outshone the rest of the girls on stage…and pretty much the remainder of the ceremony.

That’s not to say there weren’t other memorable moments from the evening, but all of those memorable moments revolve around the girls. The Spice Girls stole the spotlight when they marched on stage to collect their consecutive wins (Best British Single, for “Wannabe,” and Best British Video, for “Say You’ll Be There”). On their first trip up to the stage, one of Halliwell’s breasts popped out of her red floor-length strapless dress and she flashed her modesty to the audience. Their second trip up, Chisholm took the chance to revisit the controversial Gallagher comments and shouted into the mic: “Come and have a go if you think you’re hard enough!” 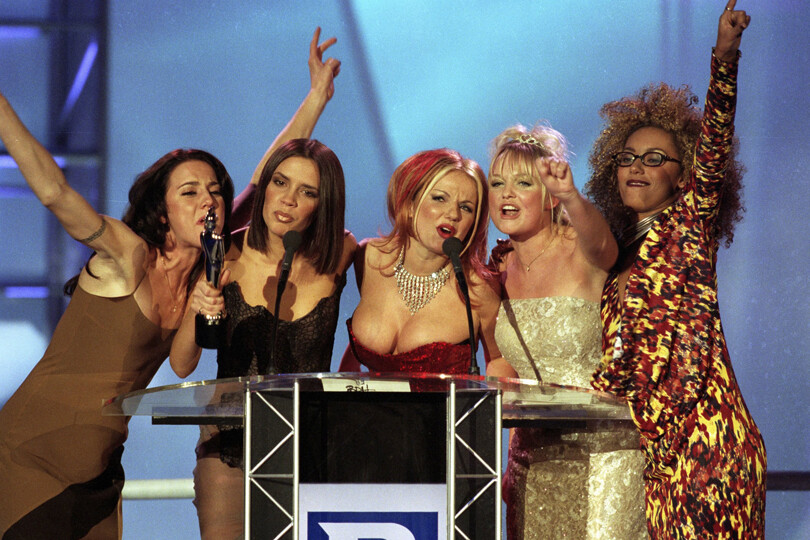 The aftermath
Brown said the Union Jack moment was what made her realize just how good Halliwell was at dealing with the media.

“That was the first time I realized how brilliant she was,” Brown said. “She had a real sense of what would catch on in the press. But she never really shared her cleverness with the rest of us.”

News coverage of the Union Jack dress was everywhere and before the end of the year Galoob Toys released the Spice Girls dolls, which would go on to become the best-selling celebrity dolls of all time. The range, of course, featured Halliwell in her iconic Union Jack dress.

In 1998, a year after Halliwell performed in the dress, she auctioned it off at the London branch of Sotheby’s for £41,320, and the dress became the most expensive piece of pop star clothing ever sold. It was bought by Peter Morton, on behalf of the Hard Rock Café in Las Vegas, to be displayed as a piece of pop memorabilia. Halliwell gave all the proceeds to a children’s cancer charity.

Reinventions
The Union Jack dress has been reimagined and worn by Halliwell on numerous occasions since 1997. Most notably…

For the 2007 Spice Girls reunion tour, named the Return of the Spice Girls, fashion designer Roberto Cavalli designed Halliwell a new Union Jack dress inspired by the original. Cavalli’s version was slightly longer, and the flag was made out of rhinestones and Swarovski crystals. Various media outlets reported that Halliwell had attempted to buy back the original dress from the Hard Rock Café prior to the commencement of their world tour, but the café still owns it and has it on display in Vegas to this day.

In August 2012, Halliwell reunited with the Spice Girls to perform as a quintet for the last time at the closing ceremony of the Olympic Games in London. Halliwell wore a short red dress with a full skirt and a Union Jack flag at the back.

For the Spice World 2019 Tour, Halliwell wore a redesigned floor-length Union Jack dress that featured royal designs on the red stripes, and also wore a crown with the dress. Gabriella Slade, the force behind the 2019 reunion tour outfits, said, “For Ginger we wanted to play on the Union Jack that Geri wore in the ’90s, so this time round we decided to present Ginger Spice as a regal queen. The long dress was a nod to her proud British aesthetic.” 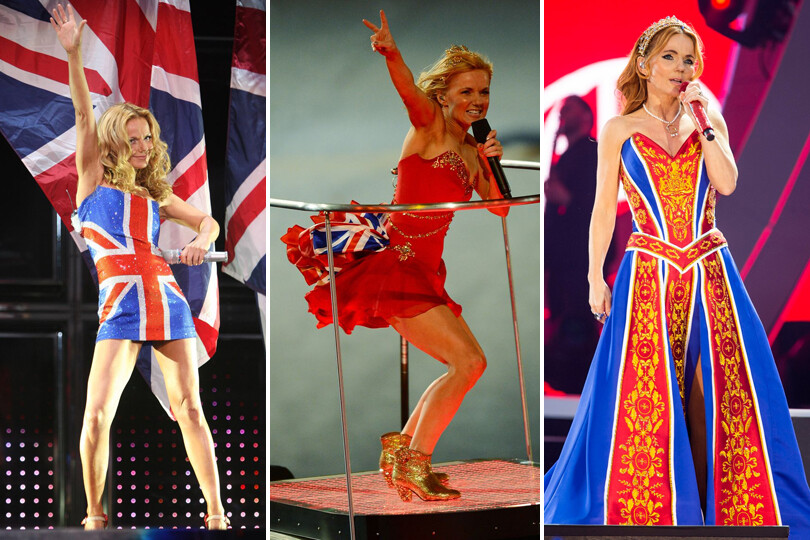 Iconic. It’s the dress that won’t disappear. Not that we’re complaining. Halliwell clearly knows what she’s doing, and she continues to offer up the Girl Power nostalgia that people love and expect. So be prepared for a least one or two more Union Jack dress reinventions in the years to come. In the meantime…some parting words from Halliwell herself, written a few years ago. 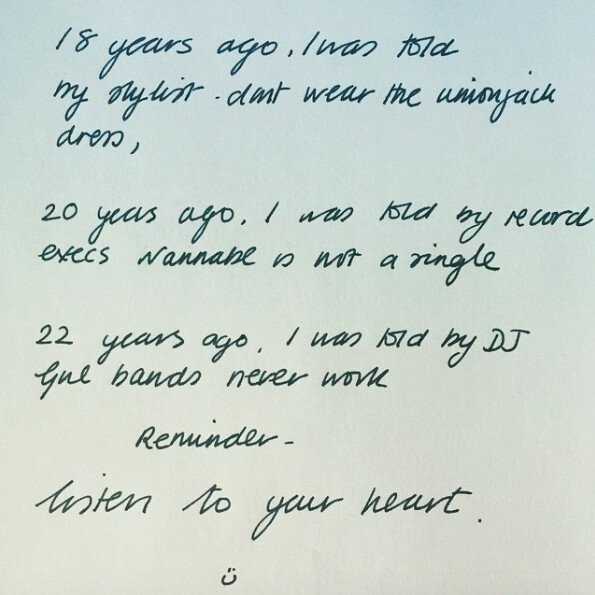 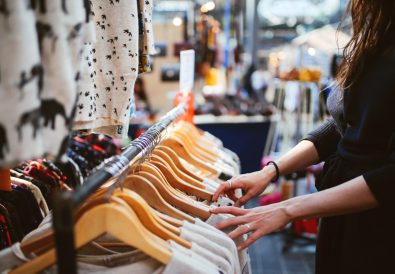 The Cardinal Rules Of Thrifting, According To An Obsessive Thrift Shopper 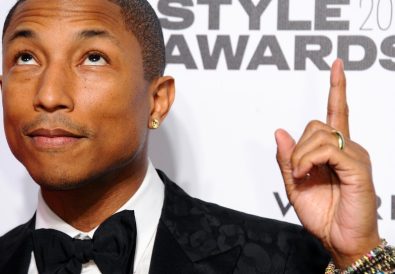