THE STORY OF: Jennifer Lopez And The Versace Jungle Dress 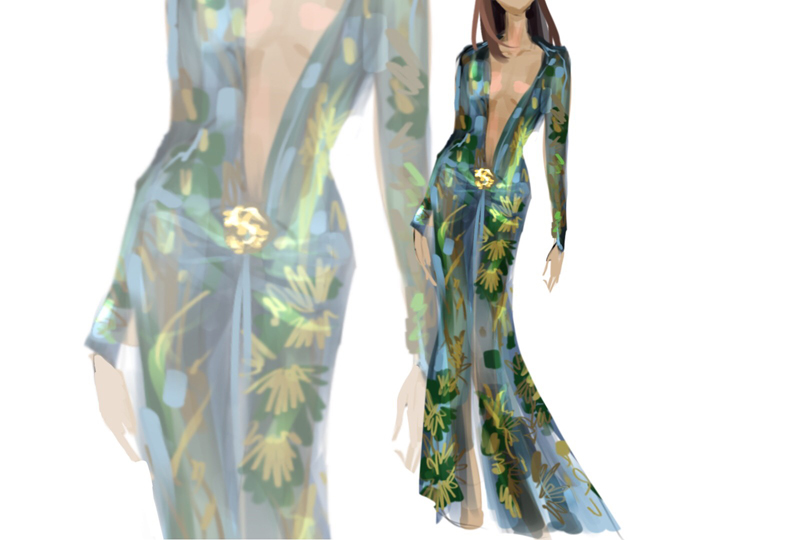 It’s an oft-repeated fashion tale – the story of the Versace Jungle dress. Twenty years after its first appearance, the daring slit-down-to-there dress that carved itself into the heart of pop culture and fashion history still commands our attention. And rightfully so. The dress changed the course of history…in more ways than one.

Of course, it was Jennifer Lopez who made the Jungle dress famous. Her walk on the red carpet at the 42nd annual Grammy Awards in 2000 is a moment forever sealed in pop culture history. But Lopez wasn’t the first to slip into the memorable silk chiffon gown.

On the runway
The tropical-print showstopper made its debut on Versace’s Spring/Summer 2000 runway in Milan in the fall of 1999, where it was worn by American supermodel Amber Valletta.

Valletta gave fashion watchers the first glimpse of the notorious print when she opened the runway show wearing the first iteration of the cleavage-baring Jungle print dress, albeit in a shorter length than the one worn by Lopez. (Valetta would also close the runway show wearing the flowing gown version.) With blown-out hair, plenty of eyeshadow and a pair of strappy bejewelled sandals, Valletta’s strut down the runway set the tone for Donatella Versace’s brand new era of no-holds-barred excess.

“Versace’s requisite ingredients [for the show] were all present: sex, bright colours and rock-hard attitude,” the editors of Vogue Magazine reported at the time.

The Italian label’s dialed-up Spring/Summer 2000 ready-to-wear collection was filled with variations of the green jungle print, which appeared on strappy handkerchief tops, brocade trousers and swimwear. “The volume on the runway was cranked up to 11 as an assortment of Hawaiian prints (not your traditional beach shirts, mind you), Grecian-front slinky dresses, mischievous handkerchief blouses and draped evening gowns flashed by under the strobe lights. Cleavages were deeper than ever, and a jet-set look imbued everything from the strappy bathing suits to the glittery heels and tie-collar blouses,” according to Vogue. 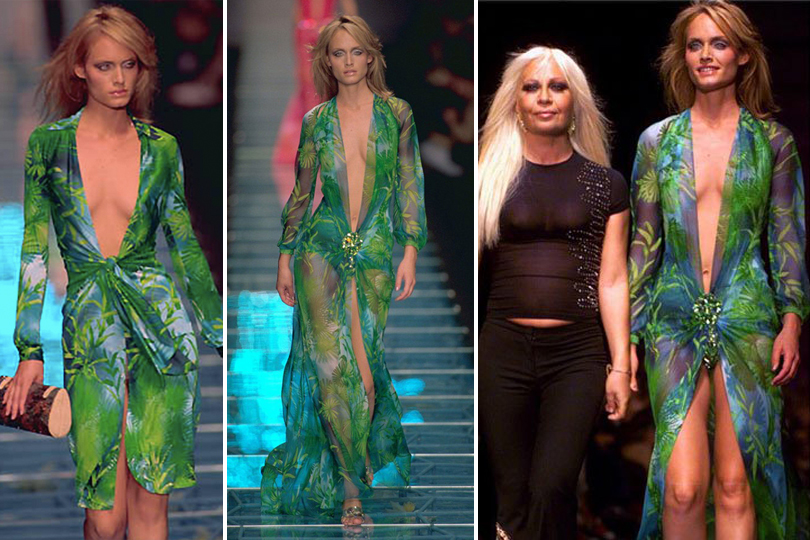 “Versace’s daring cut, wild use of colour and uncensored drama continue to be the label’s strongest assets – and Donatella shows no signs of slowing down,” Vogue declared.

After the runway extravaganza, Valletta would also don the gown for the house’s Spring/Summer 2000 ad campaign, shot by fashion photographer Steven Meisel, which graced the pages of countless fashion magazines that year. 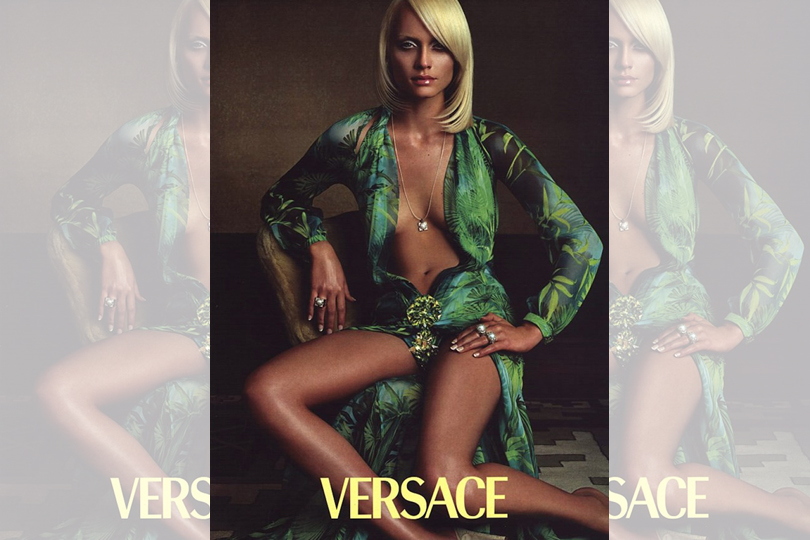 Jennifer Lopez was not the first person to wear the dress on the red carpet. In fact, that honour went (naturally) to Donatella Versace herself. The designer wore a sleeveless version of the gown to the Met Gala in New York City on December 6, 1999, marking the gown’s first off-catwalk appearance. The annual gala celebrated the launch of the Metropolitan Museum of Art’s Costume Institute’s “Rock Style” exhibition, and the guest list was a who’s who of ’90s fashion icons.

Versace was accompanied down the red carpet that night by actor Matt Dillon (who was also conveniently wearing Versace), who had appeared in the box office smashes There’s Something About Mary and Wild Things just the year before. 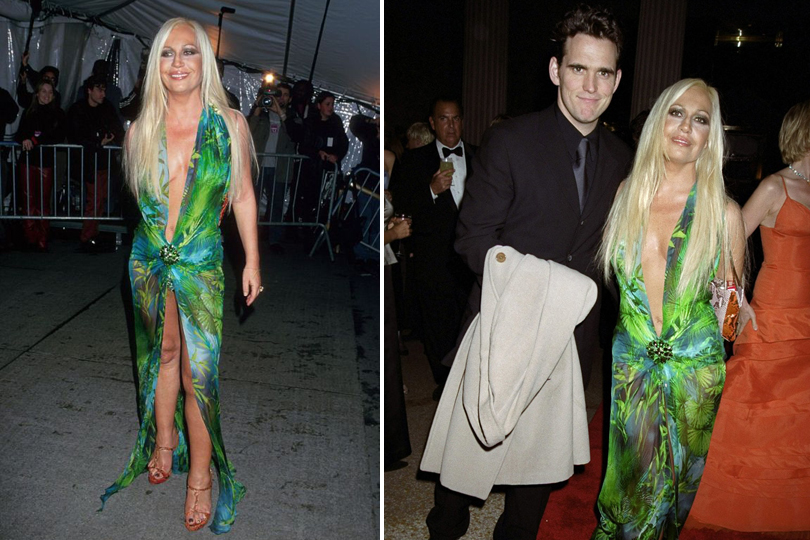 “Look At Me”
Lopez was not even the first songstress to wear the remarkable Jungle print dress on the red carpet. That honour goes to Geri Halliwell, who had grabbed international headlines the year before when she dramatically left the Spice Girls to pursue a solo career. Halliwell was promoting her debut album, Schizophonic (which spawned the hit singles “Mi Chico Latino,” “Lift Me Up,” “Bag It Up” and the lead single, “Look at Me”) when she walked the red carpet at the NRJ Music Awards in Cannes, France, on January 22, 2000, a month before Lopez would make history at the Grammy Awards.

Halliwell was on top of the world that night, and the world was following her every move. Unlike Lopez, though, Halliwell’s strut in the Versace gown with her long peroxide-blonde hair went almost entirely unnoticed. 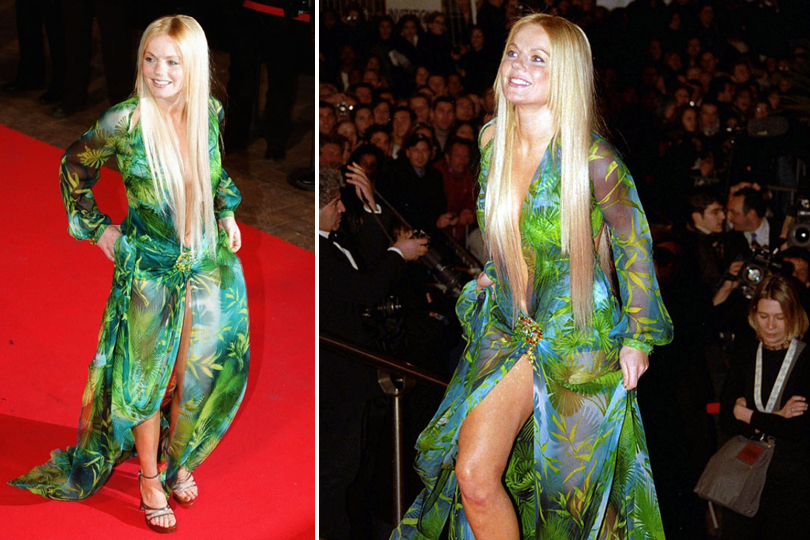 Grammy night
2000 was a breakout year for Lopez. She was known as a dancer and an actress, but she was on a mission to prove herself as a singer as well. With the release of her first single, “If You Had My Love,” in 1999, she was intent on showing the world that she was a triple threat. The Grammys would be her first big award show.

On February 23, 2000, Lopez arrived on the red carpet of the 42nd Grammy Awards at the Staples Center in Los Angeles, accompanied by then-boyfriend Sean “Puffy” Combs, who was dressed in an oversized grey suit. Lopez was wearing Versace’s Jungle print dress, which featured the same low-cut neck that extended several inches below her navel, where it was loosely fastened with a sparkly brooch and then opened out again, exposing her midriff, and cut along the front of the legs like a bathrobe. The dress drooped behind her on the floor, open at the back. Under it, Lopez wore a pair of nude-tone bathing suit shorts – and she kept the dress on by using double-sided fashion tape. 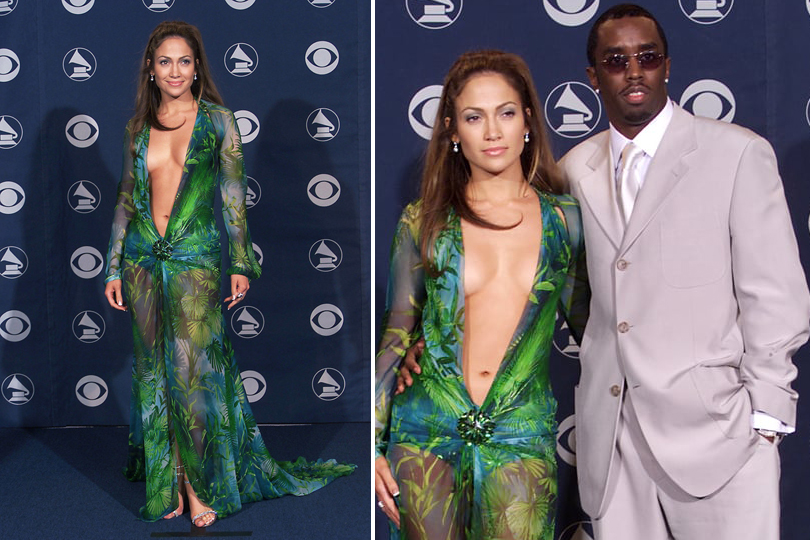 Lopez immediately monopolized photographers’ attention on the red carpet, and when she stepped out on stage with actor David Duchovny to present the award for Best R&B Album, the world was watching. “This is the first time in five or six years that I’m sure that nobody is looking at me,” Duchovny said, prompting laughter from the audience and Lopez.

“It was one of those perfect moments. I walked out on stage and it kind of blew open and the dress was just provocative enough, I guess, to make people really interested,” Lopez recalled in a September 2019 interview with Vogue, shot to mark the 20th anniversary of “The Dress.” 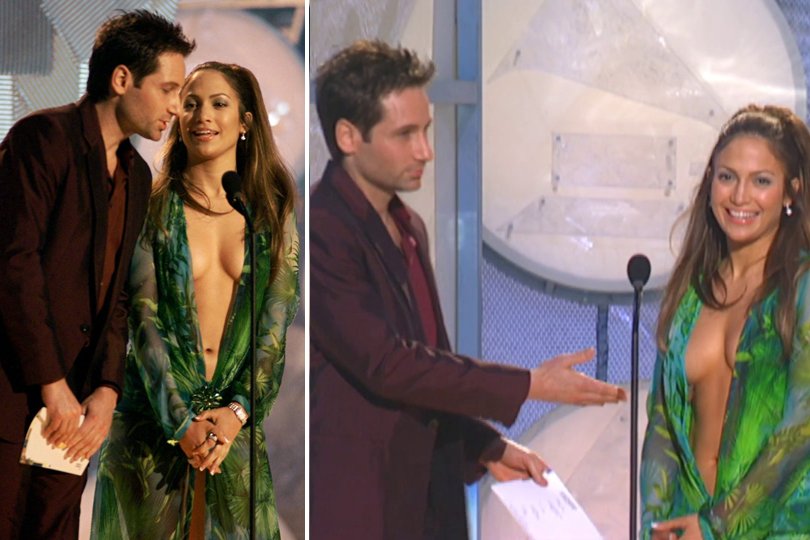 The gown was an unexpected selection. When Lopez was deciding what to wear to the Grammys, her stylist at the time, Andrea Lieberman, presented her with multiple looks, but nothing stood out. When Lieberman showed Lopez the green Versace gown, Lopez later claimed she knew it was the perfect choice – despite the fact that the gown had already been worn by Halliwell and Donatella Versace herself.

“Andrea, my stylist, was like, ‘No! You can’t wear that one.’ And I was like, ‘Why did you bring it then?’” Lopez told Vogue. “She was like, ‘No, you can’t wear that one, somebody else has worn it – actually, Donatella herself has worn it. One of the Spice Girls has worn it. Sandra Bullock has worn it in another colour.’ I said, ‘This is what we’re going to wear. This is it.’ I really didn’t think about it. I didn’t think it was all that risqué, to be honest. I was more excited that it was the Grammys. I wasn’t really thinking about the dress that much. I was just glad I had something to wear.”

Blowing up the internet
Lopez and her gown made headlines around the world – but the television footage and newspaper clippings weren’t enough to satisfy the world’s curiosity. People were so fascinated that they turned to the internet looking for more. And that actually changed the internet as we know it today: Lopez and her headline-grabbing dress went viral before viral was a thing.

There was once a world without Google Image Search – and there might still be, had it not been for Lopez and the Jungle dress.

In an essay published on Project Syndicate in 2015, Eric Schmidt, executive chairman of Google, explained how the hunt for pictures of Lopez in the Versace dress spearheaded the creation of Google Images.

“At the time, it was the most popular search query we had ever seen,” Schmidt wrote. “But we had no sure-fire way of getting users exactly what they wanted: J-Lo wearing that dress. As a result, Google Image Search was born.”

Lopez was humbled to discover that Google Images was birthed a few months after her famous fashion moment. In a YouTube video titled “Moments of Fashion,” she expressed her shock and gratitude. “It just goes to show you the power of fashion and the power of those types of moments,” she said. “And I know people try to make it frivolous at times, but what those things do is they give people an inspiration. It puts a beautiful moment out into the world.”

Donatella later revealed that the memorable fashion moment was the turning point in her career. She openly struggled after the 1997 murder of her brother, Gianni Versace, and claimed the insane media attention surrounding the Jungle dress gave her the confidence to believe in her own vision after her brother’s death.

Modern-day reinterpretation
The dress would continue to be referenced throughout the years, making countless appearances in the press. One memorable instance was at the 72nd Academy Awards in March 2000, when South Park co-creator Trey Parker grabbed our attention wearing an imitation (albeit a poor one) of the much-publicized dress.

And then on September 22, 2019, Lopez would turn heads and make headlines once again wearing Versace – this time at Versace’s Spring/Summer 2020 show, which was held during Milan Fashion Week.

The show marked the 20th anniversary of Versace’s jungle print, with models wearing tops, skirts, suits and dresses in its vivid green hues.

Lopez closed out the runway show with a bang, with the crowd rising to their feet as she strutted down the runaway in a reimagining of the original dress. Though similar in style – and keeping its dramatic neckline – the new Jungle print dress had some updates. It was sleeveless, with cutouts at the waist and embellishments throughout. 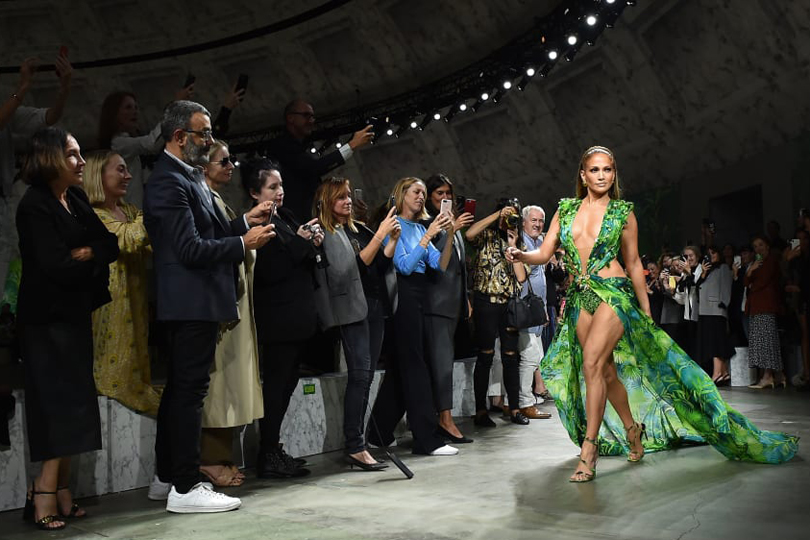 “For the Spring/Summer 2020 Collection, Donatella Versace honours an iconic moment when fashion and culture became a catalyst for technological progress,” the brand said.

In December 2019, Lopez slipped on the reinvented Jungle dress for an appearance on Saturday Night Live! On the SNL stage, she quipped, “Some people say I look better now than I did then.” 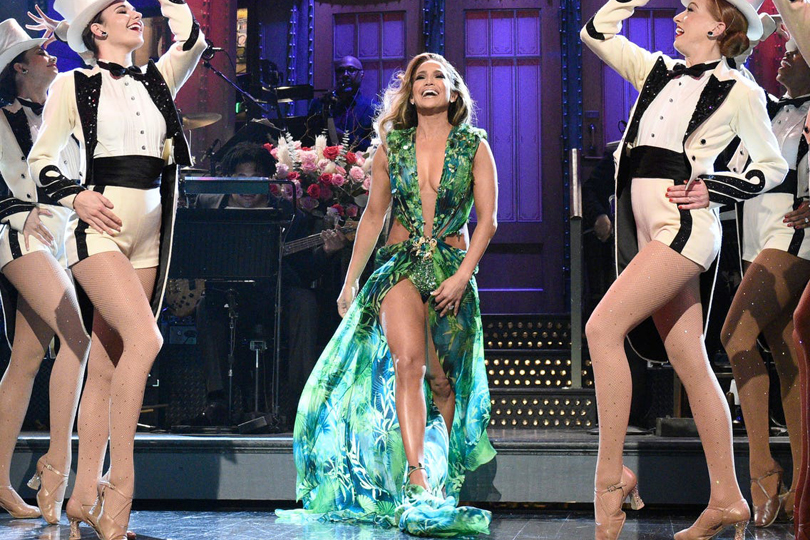 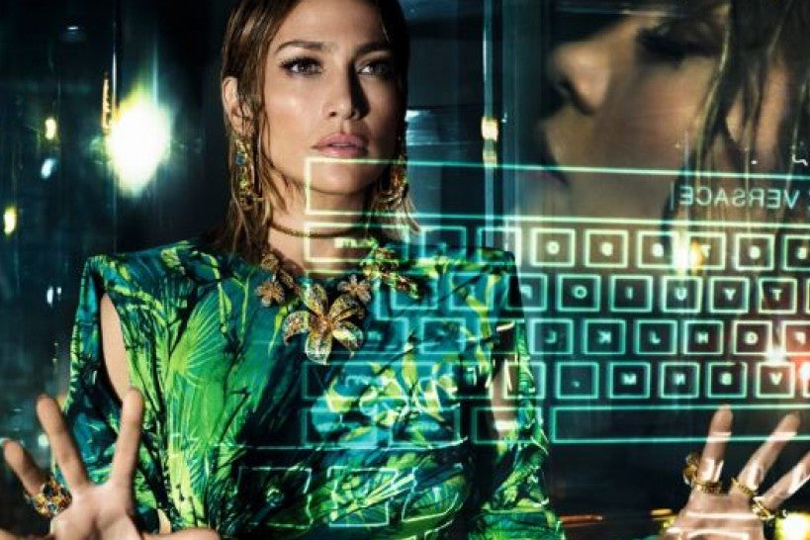 In a statement about the ad campaign, Lopez had this to say: “In terms of my career, the Jungle dress really marked a moment in time. To me, Versace represents empowerment and putting something beautiful out into the world.”

She continued: “It’s a dream to collaborate with my friend Donatella again on this gorgeous campaign, and to create something new and fresh out of a piece of iconic fashion history.”

As for the original dress? After a few years on display in the Grammy Museum in Los Angeles, it has been reclaimed by Lopez as her own. The original Versace Jungle dress that Lopez wore that night hangs inside her own wardrobe, ready for possible reuse. Fingers crossed. 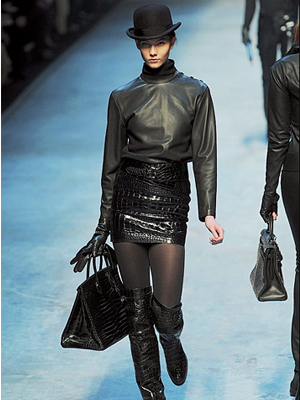 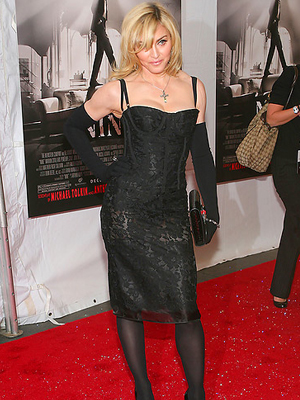