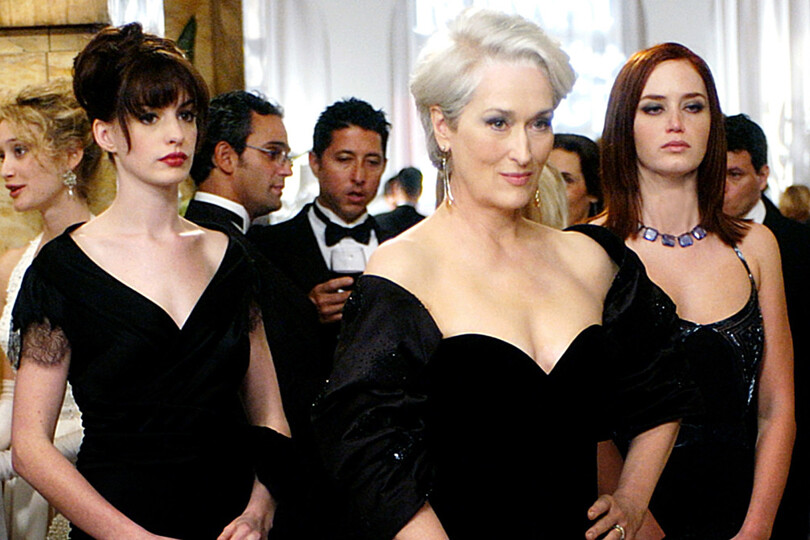 It’s been 15 years since we had to “gird our loins’ as the brilliant Meryl Streep bitchily burst on to the screen as the menacing Miranda Priestly in The Devil Wears Prada. The 2006 film, an adaptation of the 2003 Lauren Weisberger novel of the same name which spent six months on the New York Times bestseller list, is loosely based on Weisberger’s experience as Vogue‘s Editor-in-Chief Anna Wintour’s assistant. The film became an instant pop culture sensation which is still memed and debated about all these years later.

I feel confident in declaring few people love The Devil Wears Prada (the movie, anyway) more than me. Before Covid-19 forced us all into 18 endless months of hermitude, my friends and I hosted regular group viewings of DWP several times a year including a 10th anniversary screening party and viewings during various cottage and wine weekends. For my birthday one year, my friends painfully and exhaustively recreated every single food referenced in the movie (tortes filled with warm rhubarb compote, grilled cheese sandwiches with like, “eight dollars worth of Jarlsberg in there,” a cube of cheese, etc) and served it to me in sync with the movie. We continue to quote DWP regularly including classic lines like “by all means move at a glacial pace, you know how that thrills me,” and of course, “Florals? For Spring? Groundbreaking” gets a shout out every year as the snow starts to melt and the flowers begin to bloom. We’ve discussed ad nauseum about how Andy’s unsupportive friends and boyfriend are “the real villains” (well, them and that awful white hat Andy sports in her fashion transformation montage set to Madonna’s “Vogue”)

So with my appreciation for and adoration of DWP firmly established, I must admit rewatching the film in present day, in this, the year of our Lord 2021, as we slowly emerge from a long, exhausting, and perspective check of a pandemic, I now view the movie with different eyes. And let me tell you, dear reader, these eyes are TIRED. But as tired as these old eyes may be, I can still see the movie now for what it really is: a celebration of workplace toxicity and a glorification of exhausting and, essentially, exploitative hustle culture. 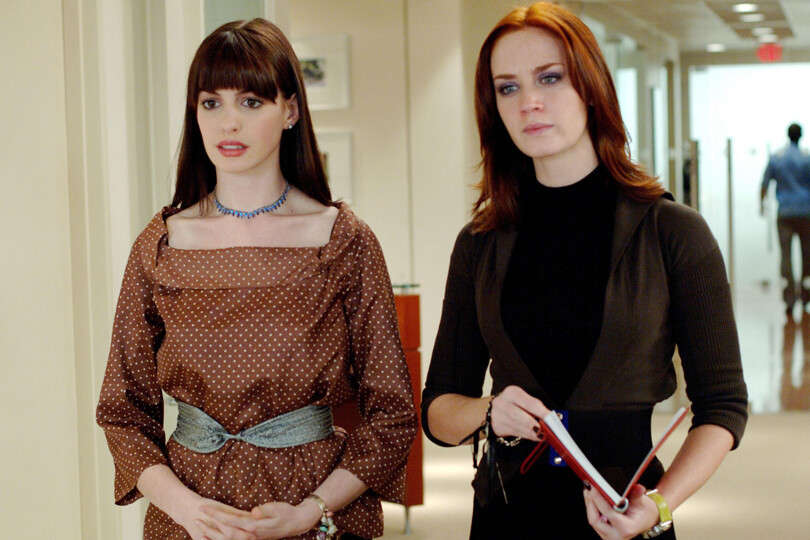 Andy and Emily work day and night, are granted measly 15-minute lunch breaks, are essentially on call each and every weekend, and are expected to be constantly giving their all (for what we can assume is little pay) When Emily, surely rundown from her brutal schedule and steady diet of one cube of cheese per day, dares to get sick, becoming, “an incubus of viral plague” she’s shamed and made to feel like she’s not performing at the expected level, setting the scene for Miranda to pit Andy against her, ultimately robbing Emily of her long-desired Paris trip.

Rewatching the movie now, all I can think is, ‘Bitch, take a fucking sick day!’ Working at Runway seems like an all-encompassing grind from which there is no reprieve, a toxic environment where turning your back even for a minute means a knife will be plunged into it at first chance. Even Nigel, played spectacularly by the incomparable Stanley Tucci, who has advanced up the ranks to become Miranda’s trusted second in command, isn’t spared. “Let me know when your whole life goes up in smoke,” he says to Andy, “that means it’s time for a promotion.” And when it seems Nigel’s years of dedication and professional and personal sacrifice will finally be rewarded, he’s double-crossed by Miranda in a strategic bid to save herself. Nigel is merely collateral damage. This is supposed to be a desirable workplace? Andy and Emily’s nonstop grinding and hustling is supposed to be the “job a million girls would kill for”? Hard pass. 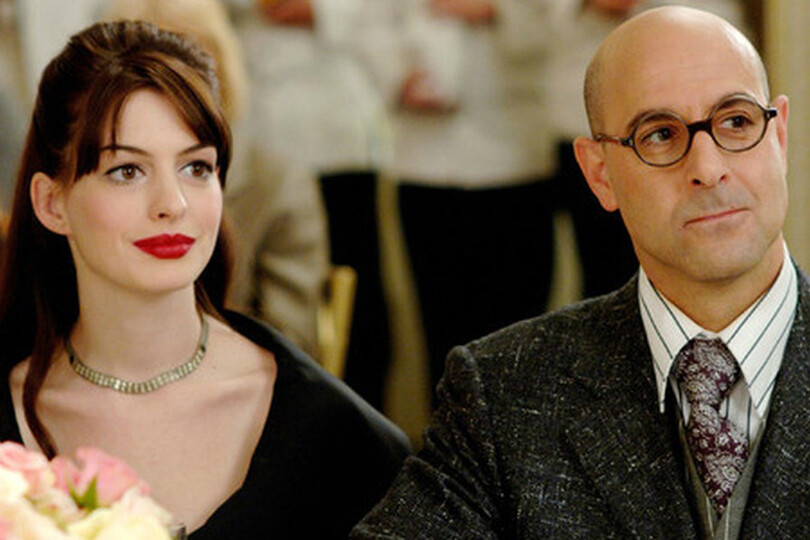 Over the years I’ve worked at a number of “interesting” workplaces and let me tell you, a gossipy, gaslighting, and competitive, venomous environment led by a toxic leader will do a number on you and chances are it will be years before you truly appreciate and understand the psychology of it all. And while that type of workplace may make for entertaining stories at cocktail parties, or provide the premise for guilty pleasure television and movies, believe me when I say having a boss who pits employees against each other or say, uses her power and authority to try and bully you into her Arbonne MLM pyramid scheme and then punishes you for not joining said pyramid scheme is not fun (yes, this a real thing that happened)

When I first fell in love with The Devil Wears Prada in my 20s, when Miranda told Andrea in the back of that limo, “don’t be ridiculous, Andrea. Everyone wants this.” I thought to myself, “yes, of course everyone wants this! Who wouldn’t?” Now? Absolutely not! Couldn’t be me. Do.Not.Want.

So while I continue to adore The Devil Wears Prada and will still drop everything should I stumble upon it on a rainy Sunday afternoon on W Network, and while I’ll carry on quoting it as long as there is breath in my body, I’ll just see it more of a cautionary tale than aspirational.

Sacrifice my entire life for a workplace that doesn’t even deserve it? No, shan’t.
That’s all. 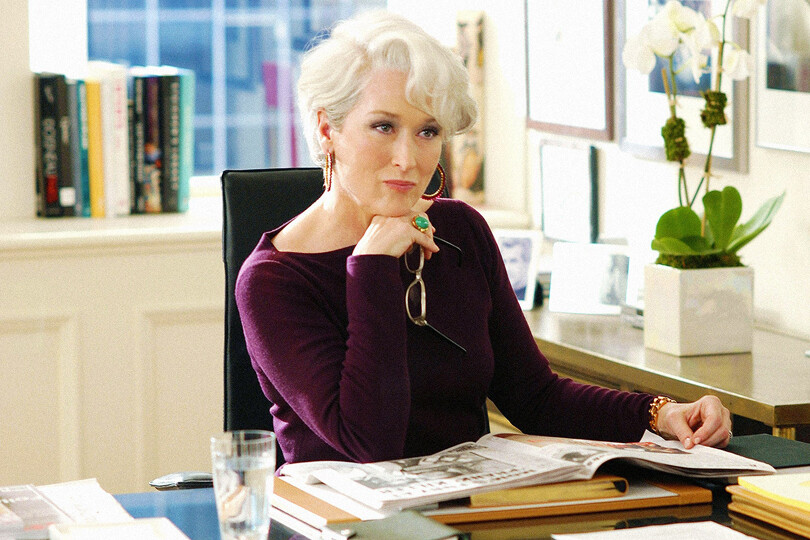