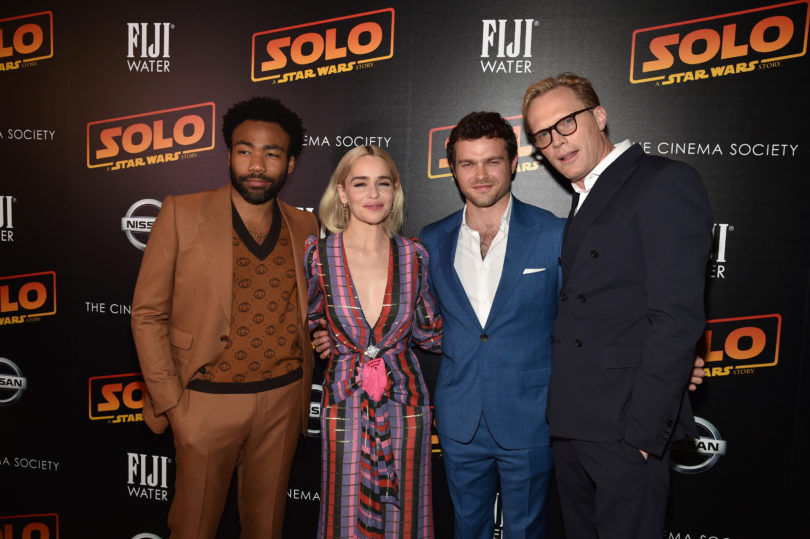 As you may have read or heard or had drilled into your brain several thousand times, the Solo movie opened over the weekend, and the controversy surrounding it continued. According to reports, the Han Solo origin story didn’t meet box office expectations and only raked in $103 million, compared to the $300 million it was expected to earn.

But like, okay. Sure. $100 million is obviously less than $300 million, but also $100 million is a lot. Have you ever seen 100 million of anything? No, you haven’t. Because you would pass away due to being overwhelmed, especially if I threw in the word “spiders.” But alas, Disney and Lucasfilm have both issued a statement, promising to re-assess their strategy going forward.

“We are all over it, and will spend a lot of time digging into why things happened the way they did,” said Disney distribution chief Dave Hollis, making it seem like a disaster had befallen us all. Or, like, making it seem like Solo didn’t earn $100 million which it did and will likely continue to do because it’s not like it’s The Room levels of bad. Have I seen it? No, because I had things to do. (And I am part of the problem, I guess.) But also: can a movie just be a movie?

It’s bananas to think that $100 million constitutes a box office failure, and it’s also bananas that we’ve put so much pressure on a movie (a movie!!!) to cement itself as the cinematic second coming of Christ. Star Wars, believe it or not, is — among many things — a children’s film, populated by princesses and loveable rogues and Franz Oz’s voice and more grown-up versions of The Muppets. Is it great? Sure! We all love Star Wars. But it is also just a movie. And as we put pressure on its follow-ups like Solo to reach the mythos of its predecessors, we seem to forget two very important points: 1) movies, while a business, are still supposed to be an escape hatch or a work of art or a means of storytelling, and 2) The Return of the Jedi is ridiculous and populated almost entirely by tiny bears. Bless us everyone, I’m very here for Star Wars, but it’s also not All About Eve. It’s fun. So it’s weird to talk about it in a way that depletes it of joy.

And we have pretty much sucked all the joy out of Solo. Did we need an origin tale about Han Solo? Of course not, but I also do not need the majority of things I buy, so that argument is boring to me. Does the drama following Ron Howard’s directorial takeover distract from the film a bit? I mean, sure, but also I’ve been distracted enough by the drama between two people I know don’t like each other to forget I was at a funeral. Is Alden Ehrenreich a reasonable Harrison Ford? Who cares. I don’t care. Give me a heist plot, Lando, and Chewie, and call it a day. Maybe Solo “tanked” at the box office because we’ve made it seem about as fun as it was for me to sift through that Variety piece long enough to pull that quote. (Not fun. It wasn’t fun.) Maybe hearing about how shitty a movie was going to be made people not want to see it? I don’t know. Also, there are 42 movies released every weekend, so pardon me if I choose to soak up a few hours of this fleeting sunlight instead.

Or maybe more specifically: have conversations outside the realm of “But is Solo a pox upon us all?!” It’s a movie. It is a movie that seems reasonable, and if you see it, you will probably like it as long as you make peace with the fact that you are watching a movie, and that Han Solo is pretend. He is not a real man. Harrison Ford is a real man, and this movie isn’t a biopic. It is a film in which its merchandise is sold in Disney stores and Targets and various other outlets you can buy action figures and stuffed toys. It’s not, if you’re a curmudgeon who is dissecting it like you’re writing a PhD, for you. Maybe it’s for a kid who can’t wait to get his hands on a terrific cape. Or for me, who feels super weirded out about your obsession with analyzing the strategy of this movie.