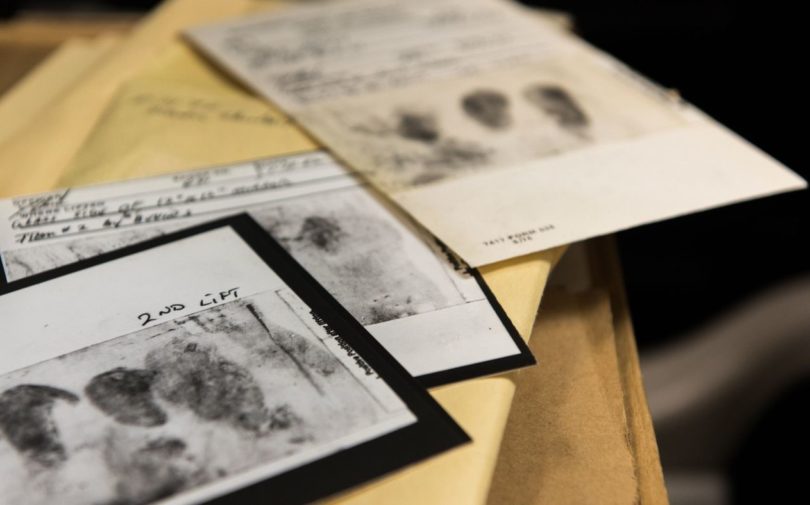 Yesterday, 72-year-old Joseph James DeAngelo was arrested and charged with two counts of murder in connection with the crimes of the Golden State Killer and East Area Rapist, a previously unidentified predator who terrorized parts of California between the 1970s and 1980s before going silent. Blamed for 12 murders and at least 50 rapes and sexual assaults, he is one of the most prolific serial killers and sexual predators in history. And the fact that nobody knew who he was made him even more terrifying.

Of course, if you’re well-versed in true crime, you understand how big a deal DeAngelo’s arrest is. (Hell, even if you’re just tuning in, you can probably figure it out.) And if you’ve read Michelle McNamara’s posthumous I’ll Be Gone in the Dark, you’ll also know how bright a light she shined on the case, both through her tireless research and her brilliant writing, and also by keeping it in the front of our minds. McNamara’s work painted vivid and realistic pictures not just of the crimes, but of those who were forced to endure them. Victims weren’t numbers, weren’t statistics, weren’t cast as supporting characters in a story about a rapist and killer. Instead, they were people with stories, with faces, with names, and with legacies (you know: real people), which made the trauma they endured feel even realer — and the need to find the man responsible even more urgent.

McNamara’s book (much like her blog, True Crime Diary) was exceptional in its ability to remind its readers that true crime needn’t be salacious or disrespectful or an exercise in erasing survivors and victims for the sake of telling a predator’s story. Instead, her work encouraged us to keep asking questions and to remain diligent. Because a man had mercilessly ransacked the lives of dozens of people. Because the work wasn’t done.

Heartbreaking and so unfairly, McNamara wasn’t alive to bear witness to yesterday’s breaking developments in the Golden State Killer case. And that made DeAngelo’s apprehension all the more emotional: finally, after decades of him getting to live free, of getting to build his own life, of getting to go to the grocery store and co-exist among his victims and the community he terrorized, he was (allegedly) found out. It’s over now. And while closure is a sweet and beautiful relief, it’s also bittersweet. It took so long. In the absence of his apprehension, those he targeted were forced to live under the constant threat of “what if.” (Especially since he took to calling his victims years after he attacked them.) He got to raise a family and live in peace. Time passed. So did people. And with the exhale of it all being over comes the now-illuminated need to process every other emotion that comes with being traumatized, being afraid, being unsure: sadness, anger, grief. There was a reason yesterday felt emotionally charged: it was. And it will continue to be.

Which is what I don’t think many people understand about true crime obsessions. For most of us, it’s not an exercise in scaring ourselves or getting off on another person’s pain. Instead, it’s a desperate attempt to understand, to learn, to comb through hard-to-hear details as a means of building our own armour (regardless of how futile that is). It’s the act of operating under the illusion that if we study enough, we can control our own fate. It’s a means of elevating victims from being merely a killer’s body count to being real, three-dimensional people who had families and lives and jobs and pets and the fucking right to be alive. Those of us who dive into books about the Golden State Killer, the Green River Killer, Ted Bundy, or Zodiac aren’t doing so because we are devoid of emotions or find serial killers “cool” (ugh), we’re doing so because we have to put our emotions somewhere. We pour our own fears and inability to stop men from killing women into a type of niche productivity. We stare monsters in their faces and try to tear down their mythos while reminding ourselves that those they hurt and killed are real people. We try to understand because we can’t possibly. So we keep consuming, hoping our DIY education will change things.

The thing is, sometimes they do.

Reading I’ll Be Gone in the Dark is not easy. It is a book so phenomenally written that every sentence feels alive. It takes hold of you and refuses to let go until you’re in it, paying witness to both the crimes of the Golden State Killer and McNamara’s tireless efforts to find him. And even when you’re finished, it remains at the forefront of your consciousness, making it impossible to have a conversation without mentioning it, re-visiting it, or yelling at friends to read it, too. It makes you want to scream to everyone about finding the motherfucker who waged war on Californian communities. It shines a light.

And this time, that light helped police apprehend an (alleged) murderer and rapist. McNamara and her work shone on it, and as she wrote herself, that sad, pathetic, withering old man finally walked in.