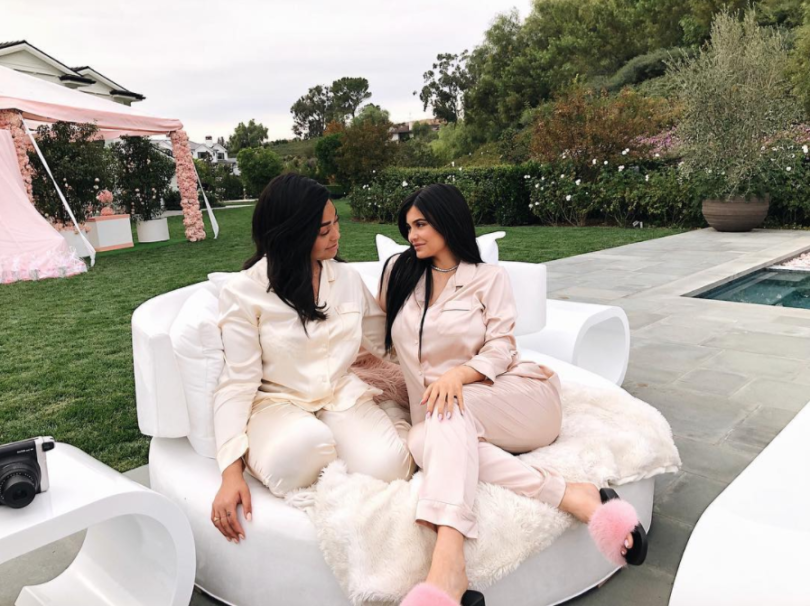 Yesterday, Kylie Jenner won the Super Bowl. (Just kidding, I know the Eagles won, and I think it’s great. But for attention-grabbing sake, Kylie Jenner was the true winner.) After months and months of speculation, she announced that on February 1, she welcomed a baby girl. Also, that she opted not to share the news with everyone as it was happening because she wanted to prepare for motherhood in a “stress-free way.”

Which, like, fair. And what’s even cooler is that she and the family released “To Our Daughter,” a generously lengthy video of 12 minutes that covers everything from Kylie’s own birth to the arrival of le wee babe, including interviews with family and friends. (Shock: it is surprisingly emotional and if you watch it before drinking your coffee or eating breakfast you will, say, find yourself in tears because you are tired and Kylie and Travis look so happy and the piano music is a very nice touch and no I’m not crying, stop looking at me, go away.) Kylie herself also posted an explanation as to her radio silence on Instagram:

“I’m sorry for keeping you in the dark through all the assumptions,” she wrote. “I understand you’re used to me bringing you along on all my journeys. My pregnancy was one I chose not to do in front of the world. I knew for myself I needed to prepare for the role of a lifetime in the most positive, stress free, and healthy way I knew how.”

And I’m here for that. Social media gives us the illusion of intimacy and the illusion of entitlement. We tend to assume that because someone shares a part of their lives, we get to see the whole thing, while forgetting that we only ever offer up our greatest hits. We do not know Kylie Jenner. She owes us nothing. We watch footage of her life on an expertly-edited TV show, and we glean what we can from snippets of Insta stories and photos. But the rest? A mystery. And it should remain that way if it’s not being offered up. Ultimately, Kylie Jenner’s last nine months proved that we know not even the most over-exposed celebrities, and have no idea as to what’s going on in their day-to-day lives. And if we don’t know what’s going on their lives (when being known is part of the job), we really don’t have a clue when it comes to each other.

Which is a relief as much as it is a reminder. When we look at someone’s Instagram or Twitter or Facebook page, we are seeing the smallest fraction of their reality. We see the person they want us to think they are. And some of those people and their personas are the same. And some are in direct contrast to one’s authentic self. But we aren’t ever really sure unless we’re close and personal friends with them. And even then, we’re usually close enough that we can discern between someone’s online #brand and who they are when you’re hanging out and talking shit over 12 a.m. diner pancakes. (At least I hope so.)

So congratulations to Kylie Jenner on her baby, but also on teaching us that we know absolutely nothing about the people we think we do. Social media isn’t a gateway as much as it is a performance. And I’m here for performances. Controlled and healthy attention is great. But an Insta story and/or photo is just an Insta story and/or photo. Because past that is someone’s real life, which we are absolutely not privy to.