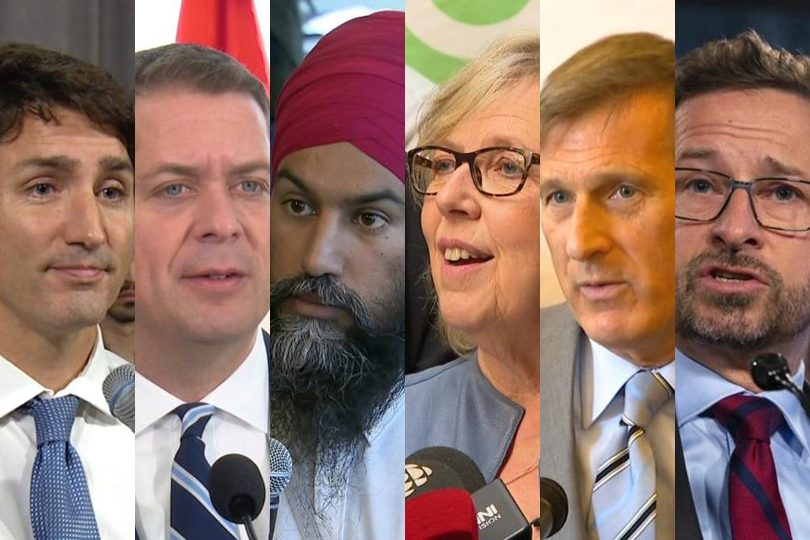 We’re less than a week from the Canadian Federal election, which means we’re close to the end so just hold on.

And I know that sounds dramatic. I know that compared to, say, the American election, the compacted nature of the Canadian equivalent seems like a blessed and beautiful reprieve. Personally, I know I would combust and die if I had to endure over another year of campaigning and speeches and debates and promises, and then I would resurrect myself and die again for the most impactful and dramatic effect.

The thing is, we’re all adults here. You, a grown-up, are reading words written by me, another grown-up, so I’m ready to stop talking like we don’t know the importance of voting or that you’re not aware that voting matters. It does! It does because it is a statistical fact that it does, and also because it’s the type of right that’s contested to this day and can’t be wasted on apathy or pointless acts of defiance. (You not voting isn’t some brave act of protest, it’s one of the most callous acts of privilege that exists. Which, again, you know. But I’ve chosen to remind you because maybe between the top of the paragraph and now we have a few new readers.)

And yet, this election cycle feels like the political equivalent of treading water in a wave pool with no access to floatation devices in sight. It’s exhausting, and will likely continue to be exhausting until Monday October 21, and while I’d love to lie and tell you that it’ll feel better the closer to it we get, I won’t lie to you because then you’ll never trust me or my opinions again (and I have some strong ones coming up about the Little Women reboot). So instead, I offer a checklist. A survival guide. A means of making it through to the end. It won’t make attack ads any better, but damn it: no one knows how to fix those under any circumstances.

Mute the people who send you into a white rage – at least until Monday
On Twitter, I hope you’re not willingly following anybody who’s ranting and raving about, say, equality. (Unfollow them! What are you doing? They will not make or break your career, I promise.) But on Facebook, it’s an endless barrage of people’s opinions that are inherently bad. Worse, they may be people you know from youth or family members who really doesn’t understand why you’re so upset about equal rights. And while I suggest unfriending anybody who identifies as a bigot (it’s great, I promise!), you, for reasons you’re not articulating to me in the comments section, cannot. So mute them. Mute them and hide them and then limit your profile so that they’ll only ever see your profile photo and the fact that you updated your work info in 2012.

Then, never read their opinions on anything ever again. They’re not helping you, and your rising blood pressure isn’t going to benefit anybody.

Share what you can from sources you trust
You likely already know who you’re voting for, but there might be people who follow you or hang out in your circles who aren’t sure. Okay! So this is when you use your platform in the best possible way: seek out the people whose opinions you value, who you can trust, and whose feeds consists of more than just attack ads, and share accordingly. You don’t always have to repurpose an idea to make people take notice. It’s more than okay to RT that thread on LGBTQ+ rights, affordable housing, or which candidate ready to treat the opioid epidemic like just that. You don’t even have to quote-tweet with a “THIS.” You can just … share. Which is actually great because there are many people who can speak truth to issues we ourselves aren’t fluent in.

Remember that each and every one of us are desperate for this election to end
All of us. We all are. Your frustration is received and understand, my friend. I know this sounds like an egregiously inconsequential thing to remember, but considering how much better most of us feel when somebody even says, “I’m tired” when we’re also tired, I’m putting this here to remind you that unless they’re truly sociopathic, everybody is desperate for this moment in time to fold in on itself and set us free.

Ask questions about what you’re unsure about
And when I say “ask questions” I don’t mean @-reply somebody on Twitter with a combative tone or the expectation that a stranger owes you a blessed thing. Instead, be your own expert. Head to candidates’ websites to see where they stand, then read up on those stances elsewhere to make sure what they’ve done adds up to what they believe. All of us are busy, I know. But if we have questions, it’s safe to assume we’re not alone in that. By educating ourselves, we’ll have the tools to elaborate on campaign points someone else might have questions about. The spread of misinformation is what’s landed us in the type of disasters we’re seeing everywhere. We can handle learning as much as we can.

Leave social media in the dust for a minute if you need to
This, I cannot stress enough. Do you know who you want to vote for? Are you exhausted? Are you at the point where it’s like, “I can’t, I just can’t”? Then take a break. Take a hiatus. Take a hot minute/hour/week/year to disengage on social media while continuing to engage in the real world. Not tweeting or posting or liking doesn’t mean you don’t give a shit. It might mean you give so many shits that you’re being consumed by the what-ifs and heaviness that accompanies elections like this year’s and it’s difficult not to fall down the rabbit hole. So shut it down and cast your vote. You’re a handful of days away.

Then we only need to read about the American election for another year and one month.