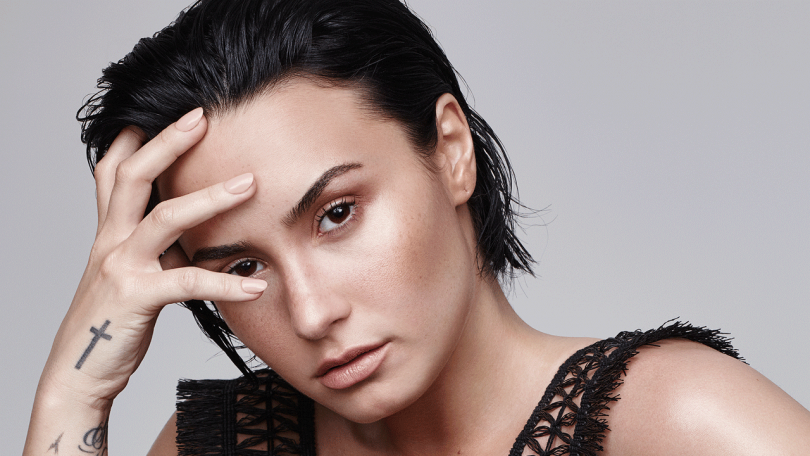 Demi Lovato is a mega pop star. She’s cranked out an impressive list of hits, but by the same token, she’s also delivered an impressive amount of powerful, honest commentary, especially when it comes to addiction, self-love, eating disorders and sexual exploration. In her new documentary, Simply Complicated, Demi sits down for an extensive interview (her first since her interview for the 2012 documentary Stay Strong, which she says she did while on cocaine) and she doesn’t shy away from talking about all of the above.

The documentary features a ton of archival footage plus interviews with family, friends and professionals that work for the star. The film shows how Lovato went from sleeping 18 hours a day and carrying drugs on planes to now being in her fifth year of sobriety from drugs and alcohol. It recounts the time when Lovato’s team was about to drop her if she didn’t change her self-destructive ways. It also shows how life has changed over the past 10 years, and specifically the lessons Lovato’s learned along the way. It delves deep into her ongoing struggles with an eating disorder and her life after a serious breakup, too.

What emerges from this documentary is not just another glimpse at Demi in and behind the camera, but also, that life isn’t always nicely tied up in a bow, that each day is a struggle and there are things we as humans have to overcome. Simply Complicated presents one 25-year-old woman’s ongoing battle and subsequent triumphs.

The opening monologue launches right into the reflective insight heard throughout the documentary, and it sets the tone for all that’s to come.

“I’ve learned secrets make you sick,” says Lovato. “I’m learning how to be a voice, not a victim. I’ve learnt that sex is natural. I’ve learned that love is necessary. Heartbreak is unavoidable. And loneliness is brutal. I’ve learned the key to being happy is to tell your truth and be okay without all the answers.”

Here’s what we got from the nearly 80-minute documentary, essentially the truths Lovato wants people to hear.

Demi had a tough childhood.

Demi’s childhood was difficult and many of her problems were brought on because of her father. Demi’s best friend tells the camera that the singer’s father “would tell them he had cancer when he didn’t” or that “he was dying tomorrow when he wasn’t,” and this contributed greatly to the divorce of Demi’s parents.

“My dad was an addict and an alcoholic,” says Lovato. “I guess I always searched for what he found in drugs and alcohol because it fulfilled him and he chose that over our family.”

Beauty pageants were what got Lovato into singing and after performing Celine Dion’s “My Heart Will Go On” in front of her entire school at age five, it was clear the young Texan had a real talent. She says she wanted to be like Shirley Temple because she was “somebody that could sing and act at such a young age.”

Demi was bullied (harshly) at school when she was in her tweens.

“When I was 12, I was bullied. I developed a social anxiety where I didn’t trust other girls my age. Then one day this girl who was popular started saying ‘Demi should kill herself, she should slit her wrists’ and it resulted in a suicide petition that got passed around and she had other classmates sign it. When I asked them why, no one could give me a specific reason as to why they were treating me the way they were. I had no friends. I was alone, so I went off what they were calling me which was a whore and being fat…I called my mom on my cellphone and said ‘I’m done, I can’t do this anymore. Pick me up’. She picked me up from school and that’s when my eating disorder developed.”

Her eating disorder is a big struggle in her life.

“One thing I haven’t conquered is my eating disorder. The less I have to think about food the easier it is for me to go about having a normal life. And I don’t want to let anybody down, so when I do have moments where I slip up I feel very ashamed.”

“When I was in a relationship with [actor] Wilmer Valderrama, I went three years without purging and when we broke up, that’s one of the first things I did. And when I feel lonely, like, my heart feels hungry. And then I end up binging and I don’t know how to figure it out how to move on.”

“Food is still the biggest challenge in my life and it controls…I don’t want to give it the power to say it controls my every thought but it’s something I’m constantly thinking about. Body image, what I’m going to eat next, what I wish I could be eating, what I wish I didn’t eat, you know it’s just constant.”

“I get envious towards people that don’t struggle with an eating disorder just because I feel like my life would be so much easier.”

The pressure of fame hit her hard and really fast.

“I definitely felt the pressure increase when the fame started to creep into my life. I started feeling pressure to look a certain way, to sing music that I felt people would like rather than sing music that I would like. There was more pressure to succeed, you know, numbers on charts and I was a perfectionist and I really wanted to be the best of the best.”

At age 17, Demi was introduced to cocaine. She was working on the Disney Channel at the time.

“I was with a couple friends and they introduced me to it. I was scared because my mom always told me that your heart could just burst if you do it. But I did it anyways and I loved it. I felt out of control with the coke the first time I did it.”

Demi once punched her backup dancer.

“I remember thinking ‘I’m about to beat this b**** up’,” Lovato recalls. “She had already boarded the plane and I just went up to her and it was like a blur, everyone was freaking out..I just remember going and sitting down and texting my mom ‘sorry’ and I slept the whole day…I just came to a breaking point.”

“I wasn’t working my program. I wasn’t ready to get sober. I was sneaking it [drugs] on planes. Sneaking it in bathrooms. Sneaking it throughout the night. Nobody knew….I was either craving drugs or on drugs…I was using while I had a sober companion, and I went through about 20 different sober companions…It’s embarrassing to look back at the person I was.”

“I felt like that was a moment in my career where I didn’t care. I just knew that I needed to be high to get through what I was going through at that point.”

“I went on a bender for like two months where I was using daily. There was one night where I used a bunch of coke and I popped a few Xanax bars and I started to choke a little bit. And my heart started racing, and I remember thinking ‘oh my god, I might be overdosing right now.'”

Phil and the rest of her team nearly dropped Lovato. It took a sort of intervention where Demi ended up tossing her phone in the water, to prove she was serious about change. To her, getting rid of the phone signified “the beginning of the process of surrendering.”

When she was a judge on X-Factor, she was in her first year of sobriety.

“What nobody knows is that while she was a judge, she’s living in a sober apartment with roommates. She is having to do chores, she has no cell phone, she is completely and totally submitted to the process of recovery,” says McIntyre.

During this time she also met her soon-to-be boyfriend, Wilmer Valderrama, while doing a PSA for the 2010 census. The shoot took place at Valderrama’s house. After Demi turned 18, the two began dating.

“I think it was love at first sight and I don’t really believe in that. But I believe that it happened. We connected on a level that I never connected on with anybody before. He was just my rock. My everything.”

After six years of dating, the two called it quits.

“It had nothing to do with falling out of love. We decided together that we’re just probably better as friends.”

“I don’t know if I’ll lose him for the rest of my life. I think my heart’s always with Wilmer. I think it was with Wilmer. It think that it is with Wilmer and I think it will be, because you don’t share six years with somebody and not give them a piece of your heart, and vice versa. Like, I’m pretty sure I’m not going to meet anybody that compares to him, but I’m trying to keep an open heart and an open mind when it comes to that.”

Demi ultimately realized she needed to be on her own and conquer life solo.

“The sparks never faded, but there are issues that I haven’t conquered yet, that I know I won’t conquer if I’m relying on somebody else to take care of the loneliness. I just wasn’t ready and there was so much in my life that I hadn’t explored yet.”

Demi now has a real love for working out and practices jiu-jitsu.

“The gym really helps and I know I would be in a really dark place without it.”

“Anytime I’m able to take my mind off any of my addictions, um, it’s very beneficial to me. Because you’re constantly thinking about what the next move is, the technique, the strategy. One goal I haven’t reached is having a black belt, working towards that is something I’m passionate about.”

“Working out is a form of meditation for me ’cause I’m not focused on anything in my head. It can transport you to a totally different place…I’m on a journey to discover what it’s like to be free of all demons.”

Without music and her fans, Demi says she wouldn’t be here today.

“The benefit that I have over some artists is my connection with my fans…I wouldn’t have the career that I have today, I wouldn’t be alive today without my fans, and I want them to be involved in any way they can because they just mean so much to me.”