by Harleen Sidhu
Beauty
No comments 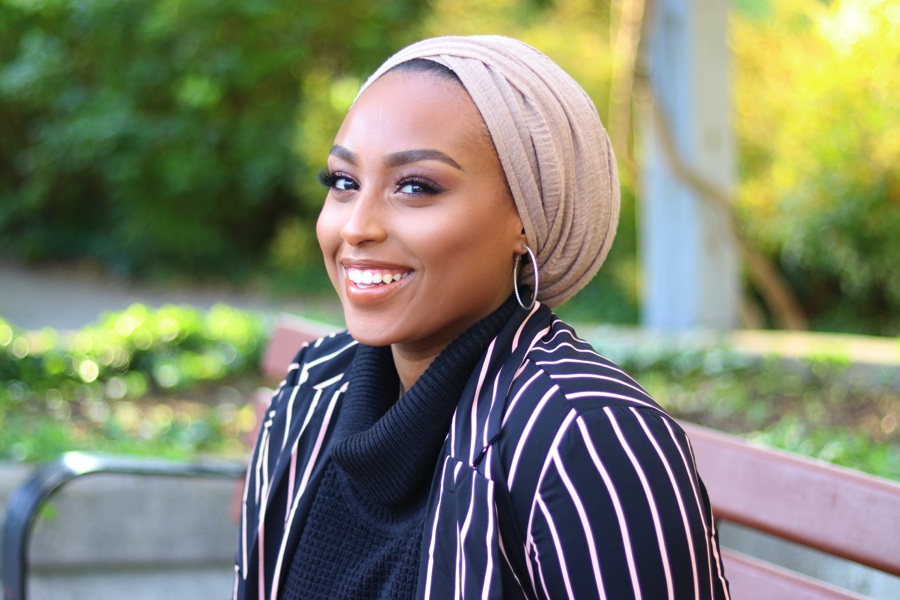 Following a thirty-minute conversation over coffee, a late breakfast and some indie tunes on a Thursday afternoon in November, Aysha Abdul walked a few blocks north, and a few west to the Bite Beauty Lip Lab in Toronto’s West Queen West to pick up “Beyoncé” — not the singer/musical genius/goddess, mind you, but the shade name of a purple custom-coloured lipstick. Once there, Abdul super casually filmed a behind-the-scenes look at the creation of the shade Beyoncé, and share it as a vlog two weeks later with her 130,000-plus subscribers on her YouTube channel, “KeepItBeautifulxo”. “YouTube is my life,” she says, “From the moment I wake up, whether it’s just checking my Instagram or uploading a photo, I’m working from the morning up until I go to bed. But it doesn’t feel like work to me.”

The 22-year-old business marketing grad turned full-time YouTuber first started creating beauty tutorials in 2012. Realizing there weren’t any black Muslim women on YouTube doing beauty, she decided to do it herself. And her work hasn’t gone unrecognized; she’s made it onto YouTube’s Women to Watch list, alongside girlbosses like Yolanda Gampp of “How to Cake It”. Here, the Canadian talent shares her journey as a beauty influencer, why inclusivity in high-end beauty isn’t enough, and her favourite blogger-approved beauty picks.

How did you get good at doing makeup? I know that’s not something that happens overnight.
I didn’t go to school or anything but I was watching YouTube ever since I was really, really young —maybe grade 7 or grade 8. I was watching people like Michelle Phan, Blair Fowler (juicystar07) — those are my go-to people — and I would try to follow their looks with what I had and I would practice at night in my room after school, after I did my work. And I would just practice like smokey eyes and it would look horrible and then I’d wipe it off and go to bed, and that was like my ritual every night. I just loved playing with makeup. So I know people hate when people are like oh ‘practice makes perfect’, but it literally was all just practice. I feel like YouTube really helped me with it, watching other people even before I started my own channel.

What inspired you to start your own YouTube channel?
I was following juicystar07, Michelle Phan, but there weren’t any people that actually looked like me, either women of colour or women who wear the hijab, or both. When I started my YouTube channel there was no one doing that and I was like, ‘why aren’t there people that look like me on YouTube?’ So I just decided to do it myself. Now there’s a bunch of people that do it which makes me so happy. Over time I kind of realized I was doing something more important than just doing makeup, I was providing representation for people. 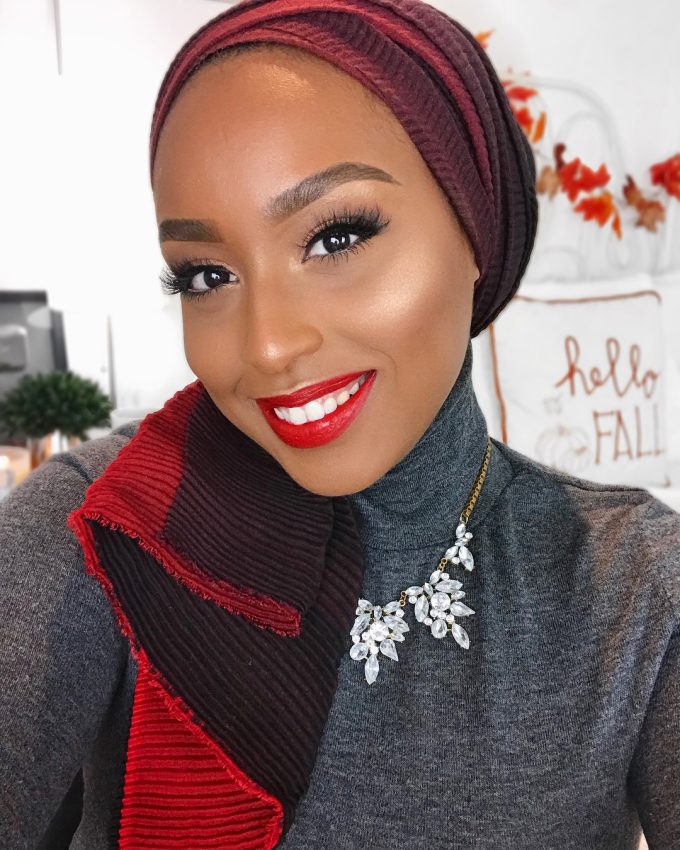 When you started a lot of girls didn’t have anyone to look up to and you became that girl. What has the response been from the YouTube community?
It was really cool, like even to this day I don’t really get that much negativity on my channel and as I was growing I was very authentic no matter what, like I’d leave my bloopers in. I was just being real and myself and I just happened to wear the hijab as well, it wasn’t like this was a defining factor of me. And I think because of that people really related to my channel and people now that still follow my channel were just as young as me when they started, so they grew with me and my channel. And I think just seeing someone in media, living their life, living their passion, really inspired them to continue supporting me and maybe make their own channels.

Do you have a memorable fan moment?
The first time I ever met a subscriber of mine in person was — I think I had maybe 5,000 subscribers, maybe 6,000 — in New Jersey. My family and I went to New Jersey for vacation and we were just in a CVS, I was obviously in the beauty section and I was with my dad and my cousin and some girl just walks by me and she’s like ‘wait, you’re Aysha.’ I’m like, ‘how do you know me?’ this is weird! She’s like ‘I watch your YouTube channel, like I love your YouTube channel,’ and my dad was just standing there — this was just when I introduced him to my YouTube channel — and he was like ‘wait, what do you actually do on YouTube, like how are random people in New Jersey recognizing you?’…Every time I meet a subscriber or fan now I get just as excited, if not more excited than they are because it’s really special to see the actual person that hit subscribe to your channel in person.

What does it feel like knowing that over 130,000 people are watching your videos?
It’s not in my head that there are 130,000 people, I’m still the same person as when I started but there’s just more people watching me now. And there’s a little bit of a pressure to consistently make good videos and make sure your quality is up to par and everything because there are so many people watching you…I think what’s more special is that of course there’s going to be people that look just like me subscribing to my channel because that’s what they can relate to, but then there’s also people that look nothing like me, aren’t from the same religion, don’t even have the same skin tone that still subscribe to me and just come back for my personality, and I think that’s really, really cool.

Who would you say are your role models or people you look up to?
I think in the YouTube space Jackie Aina is someone I really look up to. She’s almost at two million subscribers now. I’ve been watching her since she was like pretty small and I think she was one of the main women of colour YouTubers, black influencers that really made a name for herself in the business and stayed true to who she was from the beginning to where she is now.

Now more than ever we’re seeing beauty brands come out with more diverse, inclusive products, like Fenty Beauty’s 40 shade foundation range. What’s something you want to see happen in the beauty space next?
So there’s a lot of high end brands like for example at Sephora that are actually catering to women of colour but when you go to the drug store, especially in Canada, there’s like maybe one shade that will work for me from each brand. And there’s nothing darker — I’m not even the darkest skin tone, and there’s people darker than me that aren’t allowed to shop at drugstores because they don’t have any sort of colour that would match them. So I think that’s something I really want to see change in the next couple years, just drugstore brands really providing women of colour with enough of a shade range and even the undertone because you’ll see like fifty shades of beige and there will be two dark shades.

What are your all-time favourite beauty products?
The Bobbi Brown Bronzer is my favourite product right now, mascara just in general, but if I had to pick one it would be the Too Faced Better Than Sex Mascara, it’s amazing, and my Tarte brow pencil. I use the Tarte Amazonian Clay Brow Pencil and that’s like my go-to, if I’m not wearing makeup at all it’s definitely just brows and that’s it.

If you could only wear one beauty look for the rest of your life, what would it be?
I think what I’m wearing right now, just very flawless skin that looks like skin, a very soft highlight, a nude lip and then just mascara on my top lashes. That’s kind of what I do every day and I feel like it’s the most flattering on me, so if I had to go for that it would be the more natural but beat — so flawless skin and then more played up with the lips. With any outfit, any look that I’m going for it just works.

Who would be your dream client to do makeup on?
I would love to do Rihanna’s makeup. She just released a new red lipstick [Stunna Lip Paint] and I was watching her apply it to her lips and like she has the most perfect lips, perfect face ever. I feel like doing makeup on her would be a dream. I don’t do makeup on a lot of people but that would be someone I’d love to do makeup on, she’s beautiful. 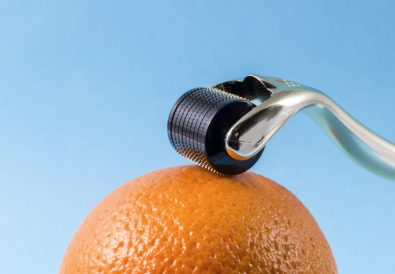 What Is A Dermaroller & Do You Need One? 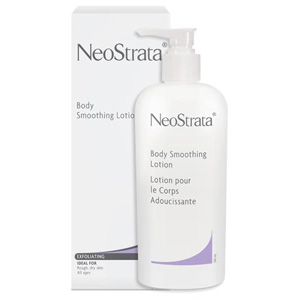 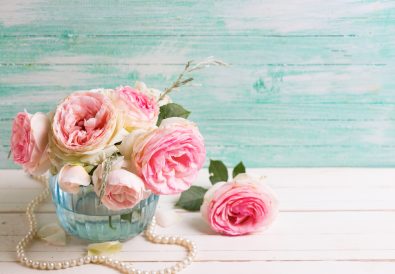 5 Treats We’d Rather Get for Easter Than Chocolate