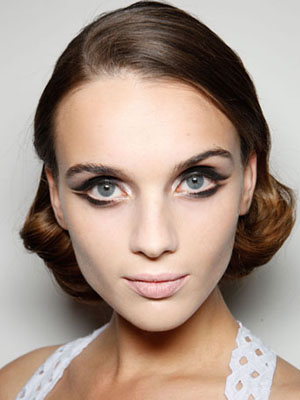 Makeup artists pushed boundaries this spring, playing with both vintage and modern looks. Honing in on eyeliner, everything from dramatic feline-inspired flicks to modern stick-on approaches trumped this season’s runways. As showcased on the runways of Jonathan Saunders, Viktor & Rolf, Rodarte and Giorgio Armani, anything goes ” as long as it’s not too subtle. Instead of mindlessly caking on liner, here’s how top designers chose to introduce these trends, and how to be sure you don each look properly.

1. Cat Eyes
Channel your inner ˜50s with the resurgence of the dramatic cat eye trend for Spring 2012. This liner trend secured a spot on the runways of Jonathan Saunders, Marios Schwab, and Dolce & Gabbana, fusing bold black shades with thick, look-at-me-now lines. Vintage black was most prominent, but coloured liners like indigo and tangerine tango brightened up the classic style. The key is to play down accompanying makeup (flesh tones are in vogue for Spring 2012) in order for the winged-out look to take flight. Celebs like Taylor Swift and Nicole Richie have made this trend their own in the past, and have rocked the liner look on multiple occasions.

2. Eyeliner Stickers
Geometric shapes and modern accents aren’t just noteworthy on clothing” this Spring, designers like Viktor & Rolf and Givenchy gave the three-dimensional right of way to cosmetics. Gisele Bé¼ndchen was one of many models on the Givenchy Spring 2012 runway to show off futuristic, mime-like dot accents, placed above and below the eyelid. Gareth Pugh and Viktor & Rolf’s spring collections played with stick-on geometric cut outs” from translucent to neon hues, respectively. For a slightly more subtle, wearable approach, try Dior’s Velvet Eyes eyeliner patches. From matte black to bejeweled finishes, these luxe eyeliner stickers are professionally crafted timesavers.

3. Extreme Smokey Eyes
This spring, the smokey-eye punk rocker makeup trend is one to covet. Inspired by all things audacious and free, artists went for an over-the-top bold look this season. As demonstrated on the runways of Gucci, this ultra-thick liner trend can look sophisticated without becoming overly gaudy. Rodarte went for a more subtle approach by lining models’ top and bottom lashes with grey-like tones and coordinating shadow. Dsquared2’s Spring 2012 runway went one step further by smudging harsh, navy shadows around thick black liner. As the spring runways suggest, when the rest of your look is de-emphasized, no smokey look is too bold.

4. Graphic Liner
Abstract ideas are often depicted through a designer’s collection, but sometimes, it’s not always about the clothing. Giorgio Armani went above-and-beyond the ordinary this spring by allowing makeup to speak up just as loudly. On the Armani runway, makeup artists added a second lift of liner. The egyptian-like flicks create a dramatic, come-hither look. It’s a modern twist on traditional liner, which ends up softening your look while still opening up your eyes. This must-try spring trend was also featured in Altuzarra’s Fall 2012 runway show. As the runways suggest, this beauty trend isn’t going to fade any time soon. 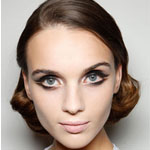 Related Content:
– The Dos and Don’ts of Coloured Eyeliner
– Eyeliner Pencil vs Liquid Liner: Which Do You Prefer?
– New Ways to Wear Eyeliner 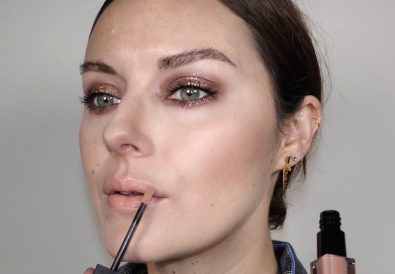 6 Ways To Wear Glitter Without Looking Like A Disco Ball 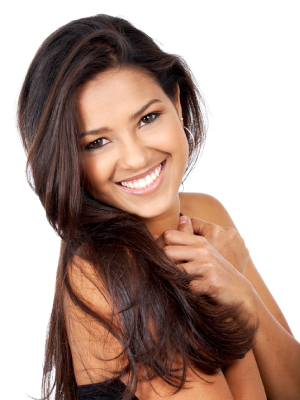 Get the Perfect Blowout at Home