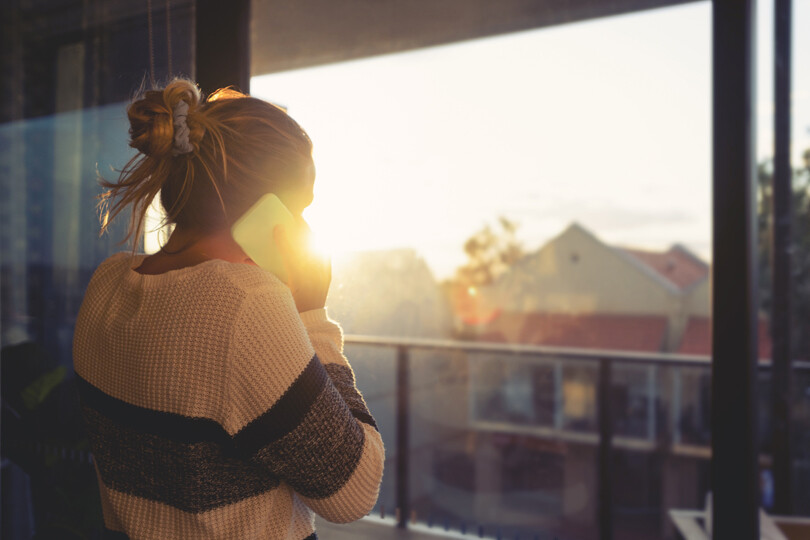 For many years, the phone was my enemy. I hated speaking on it. I hated dialing on it. I hated my boring day being interrupted by friends who dared to speak to me (because I refused to be so pedestrian as to connect in a normal, human way). My best friends would begin any and all phone calls with an apology, acknowledging that they knew I was irritated, but that they’d only be a minute because God forbid I be forced to talk to people I loved and who loved me back.

I was very busy and important as a freelance writer (nope) with a reasonable amount of deadlines (a newborn could handle the same workload) and I had evolved out of listening to my pals say words (oh lord) and into reading their texts like a true cool (kill me).

And, I mean, of course I was also miserable.

Over the last million months, most of us have reconciled that who we were in “the before” were the worst version of ourselves imaginable since that’s who we were told to be, lest we be considered disposable to our capitalist overlords. In my own life, I’d come to embrace the myth that time was money and work ranked above all things, and friends were great, but should they fail to fit into my freakish schedule, I would make time for them . . . later. When? I wasn’t sure. But never, ever on the phone.

Was I a ghoul? Absolutely. Plus, it was weird and embarrassing to assume that writing (writing!) as a job made me someone who could categorize herself as busy, important, cool, or any number of ways I described myself in my mind while I was like, driving to the mall. Writing. A job millions of other people do. Or, as I saw it: a job that meant I had too much to accomplish and could never deign to press the green button on a cell phone I spent hours doing nothing on. Sorry, I can’t talk to you, I’m doing a crossword while listening to a podcast about a murder in 1973.

But then, of course, everything changed. The obvious, duh, but also the personal revelation that for so many years I’ve been so sad and so miserable and so afraid that even a second spent not-hustling meant I’d lose myself after spending eons wrapped in the mindset that who I was hinged entirely on what I could produce. So, while sitting on my parent’s deck and overlooking the plaza I hung out at as a teen, I started talking to my friends. On the phone. Without staring at text message conversation bubble. Without censoring myself through gifs or reading back on messages a million times, or convincing myself that a late response meant that whoever I was speaking to had finally clued in that I was a hack. But most importantly, I started to listen instead of thinking ahead to what I would say. I began to realize that friendship isn’t something you schedule, or something you “carve out time for” — as if that type of love is an inconvenience. So I slowly started to let my guard down and let myself be a person (a very flawed, messed-up — I’m working on it – person) who began to trust that the people I have in my life have always deserved so much better than the way I’d been treating them. I started to prefer real conversations over text threads and DMs, and began to understand how generous it is for somebody to phone you because they’d like to hear your stupid voice. And I started to understand that any life in which real connection is considered a detriment to your professional path is not one I want to live anymore. I want to talk on the phone like I’m a teen trying to also make my awful and delicious dinner of canned tomato sauce and overcooked noodles, or while walking around the backyard hoping I don’t step in cat poop. I want to share parts of my shitty little life and wait for whoever I’m speaking with to finish a conversation with whoever just walked in the room. I don’t want to Tetris my friends or my conversations. I want to listen to what my friends have to say.

Which, for me, was a realization that made me a little nervous: yes, I am so happy to phone-talk now, but what about after? What about when planners get packed and it feels like there’s no time to breathe, let alone open up to pals in real time? Well, I think that’s actually quite simple: fuck that. Screw any reality in which the telephone is some type of hassle. Goodbye forever, toxic sense of self-importance that lends itself to the believe that none of us need anybody provided we’re pursuing our professional goals like absolute freaks. Thank you but I’ll pass, making my nearest and dearest feel like they have to apologize for reaching out to me. I’d rather step in cat poop while eating my soggy noodles and listening to the voices of persons I haven’t seen in over a year. Call me, please, I love to hear from you.

Unless I’m holding my cat like a baby. This bitch needs to hands to ask if Barry Gibb is a beautiful and fluffy boy.