THE STORY OF: The Revenge Dress Worn By Diana, Princess of Wales

by Christopher Turner
Style The Story Of
One comment 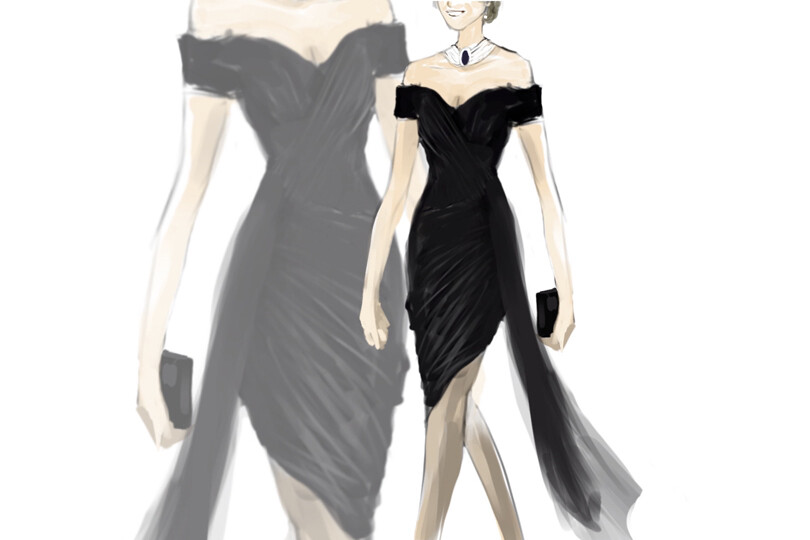 In June 1994, Diana, Princess of Wales, wore an off-the-shoulder, form-fitting black ruched dress that instantly grabbed headlines around the globe. The Christina Stambolian dress, dubbed the “revenge dress” by the press, had been purchased years earlier, but Diana had never actually worn it. She finally slipped it on when she stepped out to attend the Serpentine Gallery’s annual summer party, where a media frenzy was expected because a documentary had aired hours earlier in which her estranged husband, Charles, Prince of Wales, confessed to his affair with Camilla Parker-Bowles. The dress has been interpreted as having been worn in revenge for the humiliation, which is why we’ve never stopped talking about it. Other than her iconic ivory silk taffeta and antique lace wedding dress by husband-and-wife team David and Elizabeth Emanuel, it is considered Diana’s most famous look from her vast style archives.

The big night
Though Charles and Diana had formally separated in December 1992, the divorce process dragged on for more than four years.

On June 29, 1994, nearly a year and a half after they announced their separation, ITV debuted Charles: The Private Man, the Public Role, a two-and-a-half-hour television documentary on Charles, which was reportedly part of an effort to paint a more positive picture of the heir to the British throne. Those attempts backfired, though, when Charles confessed on prime-time television that he had been unfaithful to Diana.

“Did you try to be faithful and honourable to your wife when you took on the vow of marriage?” journalist Jonathan Dimbleby asked the prince. “Yes, absolutely,” Charles responded. “And you were?” Dimbleby pressed. “Yes,” Charles answered. “Until it became irretrievably broken down, us both having tried.”

It was the latest instalment in the soap opera of the royal marriage, or what the British tabloids had dubbed the “War of the Windsors.” But Charles’ shocking admission wasn’t the evening’s only headline-making moment.

The same night that the Charles documentary aired, Diana was slated to attend Vanity Fair’s annual fundraising event for the Serpentine Gallery in Kensington Gardens, of which she was the patron. Diana had originally declined the invitation to the dinner, but had accepted two days prior to the event, interestingly after several days of publicity surrounding Charles’ upcoming broadcast.

Instead of going into hiding after the revelations, Diana kept her scheduled appearance for later that evening. Diana’s biographer Sarah Bradford wrote that Diana “feigned indifference” in regards to the program.

She was originally going to wear a Valentino dress, but changed her mind when the fashion house prematurely released an unauthorized press release announcing the details of the dress to the press. That was a breach of royal protocol about which Diana had complained to her closet fashion advisor, Anna Harvey of British Vogue, who was equally unhappy about the PR mishap. So instead, Diana sifted through her wardrobe and made a last-minute switch to a statement-making black dress created by Greek fashion designer Christina Stambolian. Diana had bought the dress three years earlier during a shopping trip with her brother, but had never wore it. “She thought it was too daring,” Stambolian said in 2013.

It was the only dress that Diana ever bought from the designer, but it would have more impact than almost any other outfit she had worn. The black chiffon dress had originally cost £900 and was decidedly un-royal, featuring an off-the-shoulder neckline, an asymmetrical above-the-knee hemline, and a sheer scarf wafting from the waist. The short, sexy dress became the perfect sartorial power play, exuding confidence and freedom. “She wanted to look a million dollars,” Harvey said. “And she did.” 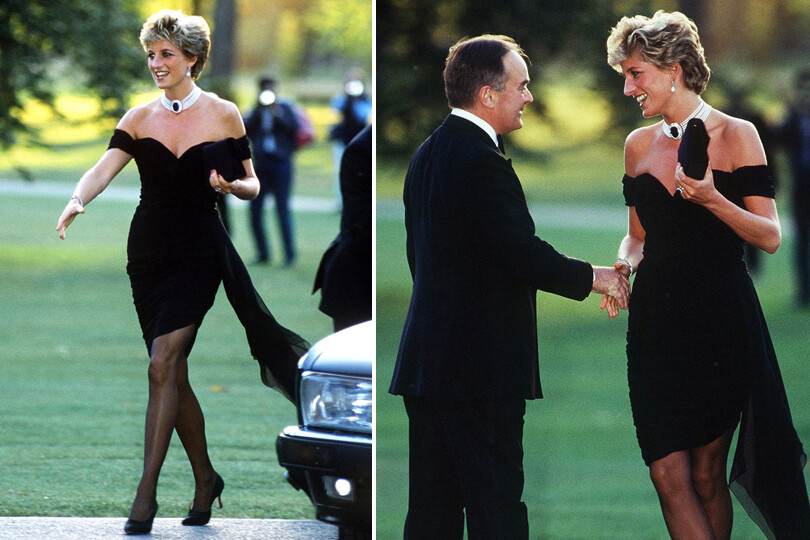 Diana then paired the curve-hugging dress with a small clasp bag, a pair of classic black pumps, a diamond ring on her finger and a sapphire-and-pearl choker necklace. The necklace was partly a gift from the Queen Mother, who had given Diana a large Sri Lankan sapphire-and-diamond brooch as a wedding present in 1981. While Diana wore it as a brooch on a few occasions after the wedding, she eventually had it mounted on seven strands of pearls as a wide choker, which she often wore both before and after her divorce (including when she famously danced with John Travolta at the White House in 1985 and when she attended the Met Gala in 1996).

When Diana arrived at the Serpentine Gallery, she got out of her car to what the BBC described as “audible gasps” and was greeted by Lord Palumbo, the chair of the trustees of the Serpentine Gallery. The photographer Tim Graham, who photographed Diana arriving at the event that evening, said that the whole arrival lasted only 30 seconds and that Diana was well aware a large number of photographers would be present at the event, especially following her husband’s earlier revelations. They were waiting for a response, and this rebellious dress would be that response – it was a clear message to Charles, the royal family and the world.

The dress, of course, broke one of the English monarchy’s major fashion rules…an off-shoulder neckline was not encouraged for any royal appearances. The dress was also much more provocative than the royal family was used to. At the time, Diana was still a member of the royal family attending events on behalf of the Crown, and was well aware of the sartorial stipulation.

Even the colour of the dress is highly significant. It was the first time that Diana had worn the colour black at any official engagement other than a funeral since before her wedding in 1981. The Crown costume designer Amy Roberts revealed that any time Diana wore the colour black, she was making a dig at Charles and the royal family. “It was absolute defiance,” says Roberts. “Because [the royal family doesn’t] like you to wear black – Charles never liked Diana to wear black.”

The following day, Diana and her dress dominated the front pages of almost every newspaper in the UK, pushing her husband’s revelations to below the fold. In the Telegraph, the dress was hailed as “the brave, wicked, historic little Serpentine Cocktail.” It went on to say that the dress, with its “devastating wisp of black chiffon,” was “possibly the most strategic dress ever worn by a woman in modern times.” Other headlines described the dress as the “I’ll show you dress” and the “vengeance dress,” as well as the name that ultimately stuck… the “revenge dress.” In her 2007 book The Diana Chronicles, Tina Brown wrote that Diana’s dress was also called “her fuck-you dress” by more than one prominent fashion editor. 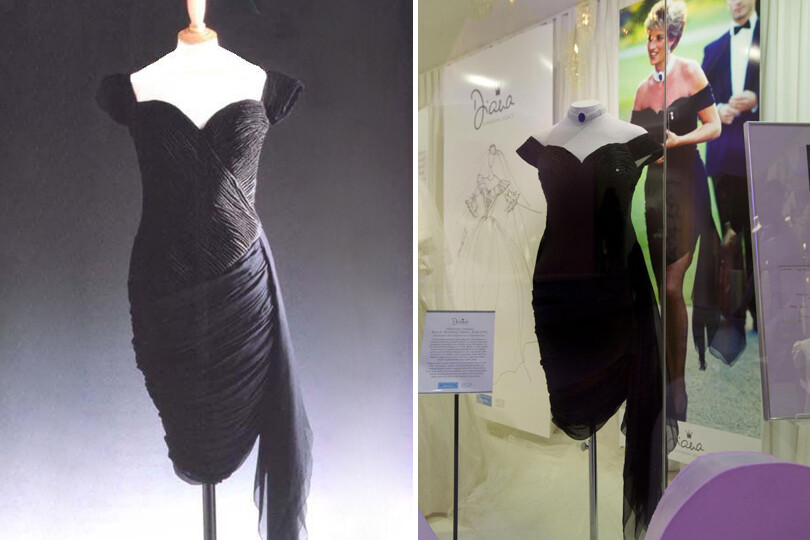 Up for grabs
In June 1997, three years after Diana wore the dress and just two months before she died in hospital after being injured in a car crash in the Pont de l’Alma tunnel in Paris, Diana put 79 of her cocktail and evening dresses up for auction at Christie’s in New York City. The money raised from the auction was to benefit The Royal Marsden Hospital Cancer Fund and the AIDS Crisis Trust, two causes that she championed.

Diana’s Christina Stambolian revenge dress, a size 10, was included in the auction and sold that night for $65,000. The auction ultimately raised $3.25 million for the two charities. The dress was bought by Graeme and Briege Mackenzie, a Scottish couple who planned to use it to raise money for children’s charities. Since the purchase, the dress has appeared in several exhibitions, including the popular 2017 exhibition Diana: A Fashion Legacy.

The best revenge is…
So, was it really intended to be a revenge dress? Diana never officially commented or explained her sartorial choice for the evening, but it’s hard not to imagine that Diana didn’t know exactly what she was doing with the last-minute dress switch, especially when she paired it with the sapphire-and-pearl choker necklace and the jewel’s history. She was aware of the interview, and well aware of royal fashion protocol for royal events. There’s no doubt that the dress was Diana’s not-so-subtle way to show independence from Charles and the royal family, their strict codes of conduct and royal family protocol.

Though we will never have a quote from Diana on her true intentions for wearing the “daring” Stambolian black dress that night, if the dress was Diana’s small act of revenge, she sure did look like a million bucks wearing it. 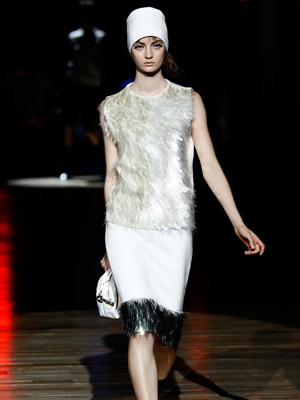