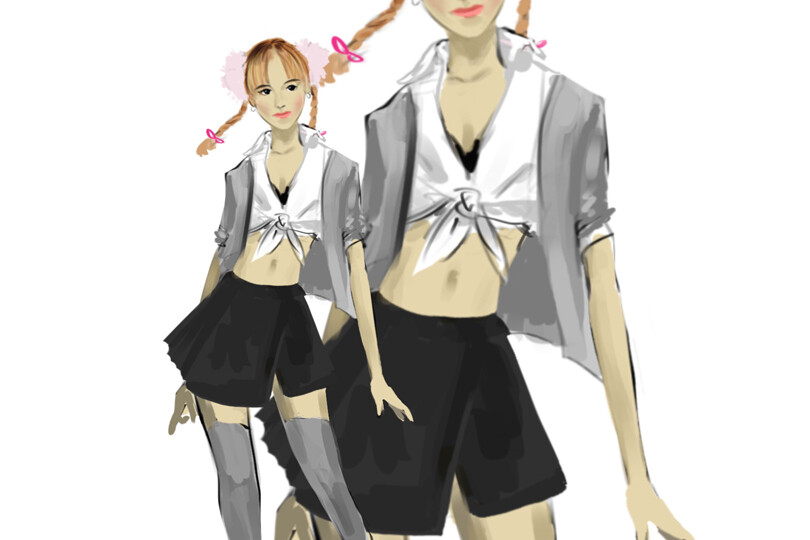 “…Baby One More Time” didn’t just launch Britney Spears’ pop career – it kicked off the unstoppable teen pop boom of the late ’90s, clearing the way for an army of imitators and boy bands to dominate pop culture. The hit song is incredibly catchy with Spears’ now signature throaty vocals…but one of the reasons the song, and the singer, garnered so much attention at the time was because of the music video: specifically, the schoolgirl uniform, complete with thigh-highs, tied-up blouse and pink feathered hair accessories. The iconic costume not only invited controversy but instantly cemented Spears’ status as a pop phenomenon. Not bad for a small-town Louisiana teen making her first record.

Now that it’s been over 20 years (!) since the song’s debut, and given the recent fight over Spears’ “conservatorship,” this may be a good time to look at the story behind her iconic “…Baby One More Time” schoolgirl outfit.

A lucky coincidence
Swedish producer-songwriter Max Martin originally wrote a song called “Hit Me Baby (One More Time),” intended for TLC or the Backstreet Boys; however, both groups ultimately rejected the song when it was submitted to them. British boy band Five also passed on the song before it ended up in May 1998 with then-16-year-old Britney Spears, who had recently signed a record deal with Jive Records. Spears heard the demo for the song, absolutely loved it and wanted to record it, but Jive Records felt uncomfortable about the suggestion of abuse and removed “Hit Me” from the title. (Ironically, Martin thought “hit” was American slang for “call.”) And so the song about the heartache of a recent breakup turned to a runaway hit on the charts, with the public perhaps a bit confused about the meaning but none the wiser.

Spears told Rolling Stone in 2000 that she spent the night before the recording session for the song listening to Soft Cell’s “Tainted Love” (“What a sexy song”), her model for the vibe she was going for. “I wanted my voice to be kind of rusty,” Spears said. “I wanted my voice to just be able to groove with the track. So the night before, I stayed up really, really late, so when I went into the studio, I wasn’t rested. When I sang it, I was just laid back and mellow – it sounds cool, though. You know, how it sounds really low in the lower register – it sounds really sexy. So I kept telling myself, ‘Britney, don’t get any rest.’”

“…Baby One More Time” was released as Spears’ debut single on October 23, 1998. On November 21, 1998, it debuted on the Billboard Hot 100 at number 17, and two and a half months later it topped the chart for two consecutive weeks.

The vision for the video
The music video was directed by Nigel Dick, who had just come off of directing the videos for “Backstreet’s Back” and “I Want It That Way” for the Backstreet Boys. Originally, Dick had proposed a video with Spears in outer space where she lands on Mars and then breaks into a dance routine. [Editor’s note: You may recognize this as the exact same video treatment for Spears’ “Oops! …I Did It Again,” which Dick later directed in 2000.] Spears saw the treatment for the video and said, “This is horrible. No way am I doing this. This is really cheesy. Let me get on the phone with Nigel Dick.”

Spears’ idea? She wanted to be in a high school with a bunch of cute boys and do a little dancing. Dick was hesitant, but ultimately revamped the plan for the video. In an interview with Entertainment Weekly, Dick explained that initially he had been unsure of taking Spears’ advice.

“Your initial reaction to this is, I’m being told by a 16-year-old girl what I should do.… [But] this girl is 16 and I’m a grown man; perhaps she has a better perspective on her audience than I do. So I swallowed my pride,” Dick said.

Production for the “…Baby One More Time” video took place in Los Angeles on August 7 and 8, 1998, although it didn’t premiere on MTV until November 26 of that year. It was shot entirely at Venice High School, located at 13000 Venice Blvd. in the L.A. neighbourhood of Mar Vista, the same school used to shoot the 1978 film Grease.

“Her idea was the whole Grease thing, dancing in the hallway,” explained Barry Weiss, president of Jive Records. “She gave the kernel of the idea to Nigel, and he came up with the rest.” 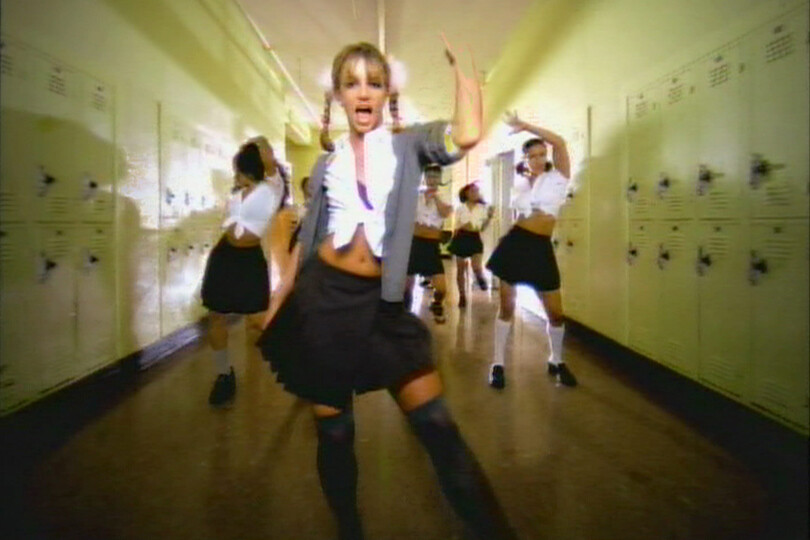 And then…that outfit
The opening scene of “…Baby One More Time” features a bored Britney in her pigtails with pink pom-poms, sitting in a classroom with her assistant Felicia Culotta playing the role of teacher. She fiddles with her pencil until the bell rings, the first chords thump and she coos, “Ooh baby, baby.” We then get our first look at the full schoolgirl outfit: a white shirt tied up to expose her midriff, a grey cardigan, a super-short skirt and a pair of thigh-highs.

As it turns out, the infamous outfit was also Spears’ idea. Recalling events to MTV News, Dick said he had assumed she would wear a T-shirt and jeans until, at a fitting for the video, Spears said: “Wouldn’t I wear a schoolgirl outfit?” They promptly bought the outfit from a local Kmart department store. “Not one piece of clothing in the video cost more than $17,” Dick told the station.

“The outfits looked kind of dorky, so I was like, ‘Let’s tie up our shirts, and be cute,’” Spears told People back in 2000. “It was about being a girl and knowing about fashion.”

Of course, parents’ groups were outraged and declared the sexy schoolgirl outfit calculatedly “Lolita-esque.” But interviews with Spears pointed less to deliberate innocence and more to actual innocence: “I was like, ‘I want something all kids my age, you know, a lot of kids can relate to,” she told MTV Radio Network. “You know, being in school, they’re bored, they want to get out of school. Then we go out, and then there’s a lot of dancing. It’s just a fun video.”

The schoolgirl outfit caused a lot of controversy. Specifically, it was the fact that Spears had tied up the bottom half of her shirt and exposed her belly button and abs. “Me showing my belly? I’m from the South; you’re stupid if you don’t wear a sports bra [when you] go to dance class – you’re going to be sweating your butt off.”

Regardless of Spears’ decisions, Dick received a “huge amount of grief” when the music video came out, because people thought she was being exploited. In fact, ever since the video hit the air, the court of public opinion has debated whether Spears knew she was sexualizing herself and did it on purpose, or whether she simply thought it was a cool look.

Regardless, the “…Baby One More Time” schoolgirl outfit is considered one of Britney Spears’ most iconic looks, and today it can be found in a glass display box at the Hard Rock Hotel and Casino in Las Vegas, Nevada. If you can’t make your way to Vegas, don’t worry…you’re sure to see countless fans using the video as inspiration and dressing up as schoolgirl Britney Spears every year on Halloween.

In October 2019, Spears reflected on the song turning 20, saying, “It’s hard to put into words what today means to me.… Twenty years ago, the world heard my music for the very first time!” People are still listening and singing along faithfully today. It remains one of her most popular songs.

And, in case you were wondering, she sings the word “baby” 25 times in the song.

Want more? You can read other stories from our THE STORY OF series right here. 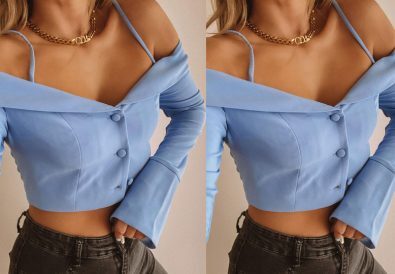 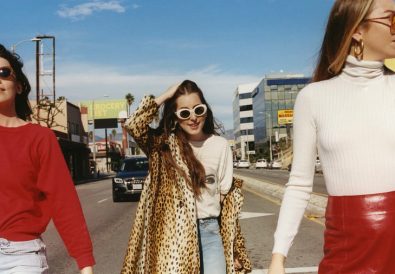 How The Haim Sisters Are Reviving Rock-Chic

The Right Scarf for You This Season