On Tuesday, Ralph Lauren held his spring/summer 2018 show in his Bedford, New York garage, and juxtaposed models amongst his multi-million dollar luxury car collection after shuttling guests to revel in his kingdom.

Which, on paper, doesn’t look good. To show off one’s wealth while showing off a collection that necessitates wealth seems tone-deaf, particularly as the middle class continues to collapse in on itself and the chasm between the rich and the rest of us keeps expanding (not to mention that thousands of people have been left homeless in the wake of Hurricanes Harvey and Irma). Nothing screams “I’m out of touch!” like parading the rich and famous alongside a collection of cars few of us will ever be able to afford, and while fashion can help us escape into fantasy, I imagine nothing destroys someone like leaving a party and returning to Bentley-free life.

But when you think about it, the celebration of excess was at least transparent. Fashion Week, while a wonderful way to celebrate art, style, clothing, and self-expression, relies on our suspension of belief. We lap up shows, ignoring the fact that so many collections exist outside our price ranges, and build our own wardrobes based on the pieces that stood out the most to us. We use shows and their narratives to inspire our own story changes, and use clothing to decide who we’re going to be that day. Fashion Week and fashion shows work to create a fantasy, and while it’s a valuable and beautiful one (never discount the power of using fashion as armour), we forget that the luxury industry itself is stacked on wealth and a lifestyle that allows for it.

Lauren, however, didn’t want us to. Where most shows and collections allow us to disappear into our own worlds, he transported attendees into his. And while his collection was still a fantasy (both in that it looked like a James Bond casting session and that few people on the planet can afford to live so affluently), it was one he dictated the terms of. He didn’t hide his money, his empire, his cars, or his reality, and because of that, he lifted the curtain on the realities of being a big name in fashion. He’d reached the point where actors, journalists, editors, insiders, and various famouses would travel nearly two hours to visit him: this is what power looks like, and he wanted us to see it.

Which isn’t to say I’m into that. I believe fashion is most interesting when you can assign your own story or when a designer’s vision is so compelling — (like, say, Raf Simons at Calvin Klein) — you can’t help but feel like you’ve been taken to a world that exists outside fashion tents, live streams, catwalks, or this man’s garage. After all, there’s a difference between going to a gallery or museum and taking in art, and being invited to someone’s home to bask in their private collection. One feels open for interpretation, the other is a dictation. And despite the transparency of someone being honest about what they have, there’s a limit to the way the art itself can effect you.

And Lauren’s never been shy in aligning himself with the ideals of a particular sect of the American dream. (I mean, Melania Trump did opt to wear his clothes to the inauguration in January.) Which is why when we talk about him, his most recent collection, and more specifically, his show this week, it needs to be more than a conversation about how unique a premise it was. Instead, it’s a too-real look into the realities of being monumentally wealthy and what it looks like to be able to outfit the First Lady and Hillary Clinton within the same campaign. And what it looks like to have so much. And what it looks like to be a major player in an industry whose M.O. is actually built on artistic expression and creativity as much as it is about success in a dollar sign sense of the world.

Meaning that if this particular designer is so willing us to let us into his kingdom, it’s up to us to challenge that invitation, that display, and what it is we want fashion to be versus what it is. The Obakki Foundation Teams Up With Anthropologie 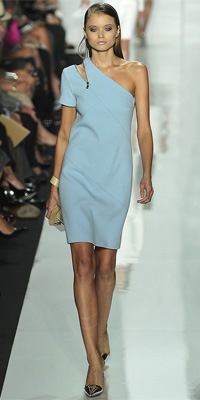