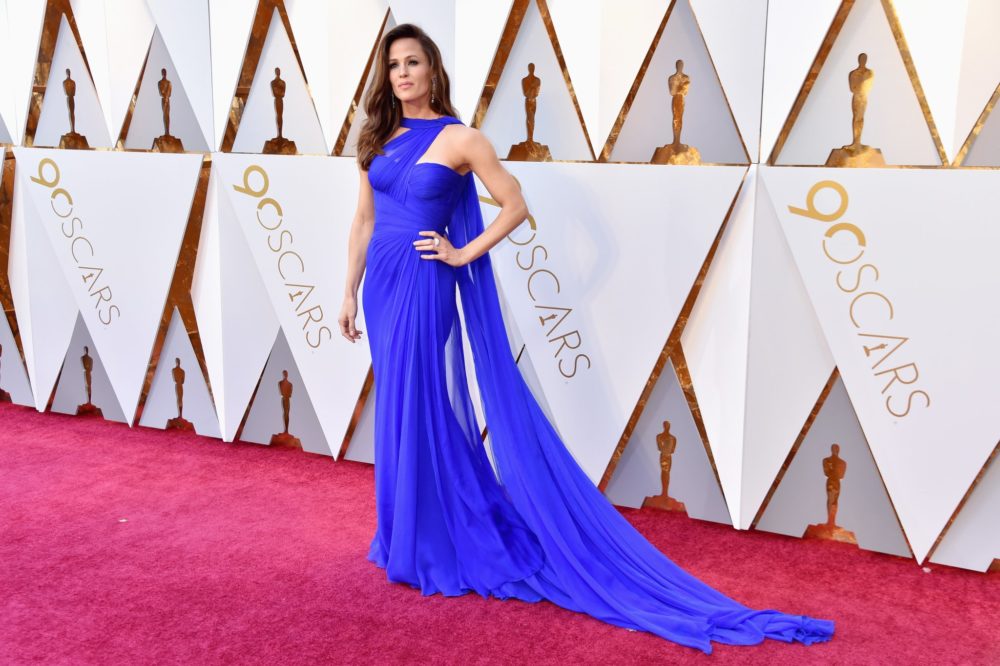 COLOUR! After several awards shows featuring all-black gowns (which we definitely loved), it was refreshing to see colour again at the 2018 Oscars. And the celebs went for bold, with pops of cobalt blue, fiery red and fuchsia on Jennifer Garner, Nicole Kidman, Alison Janney and Viola Davis respectively. Simple, sleek gowns also made waves on the red carpet, with actresses like Laura Dern, Alison Janney and Jane Fonda all choosing minimalist column gowns. Read on for our colourful faves and the best dressed at the Oscars 2018. 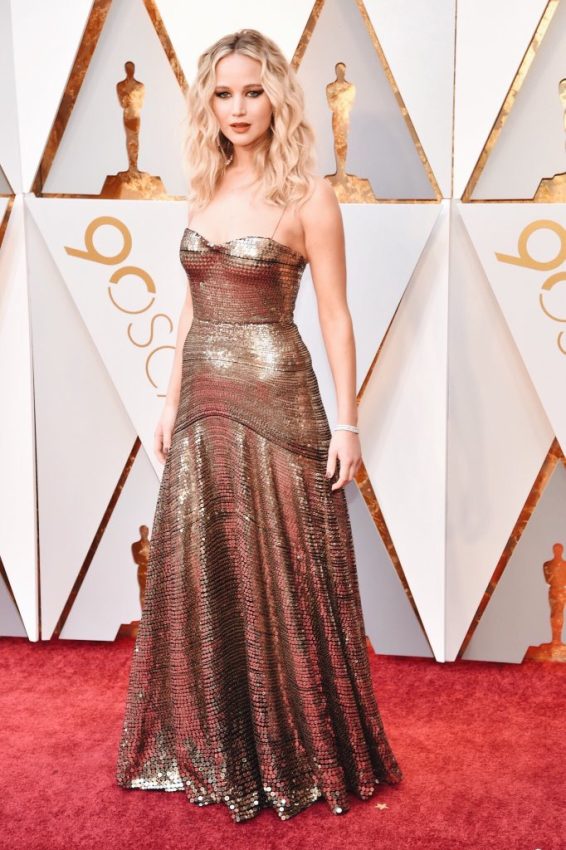 This glimmering gold Dior slip dress on Jennifer Lawrence is perfection. We love the deconstructed feel of the gown matched with her naturally wavy hair which looked effortlessly polished. 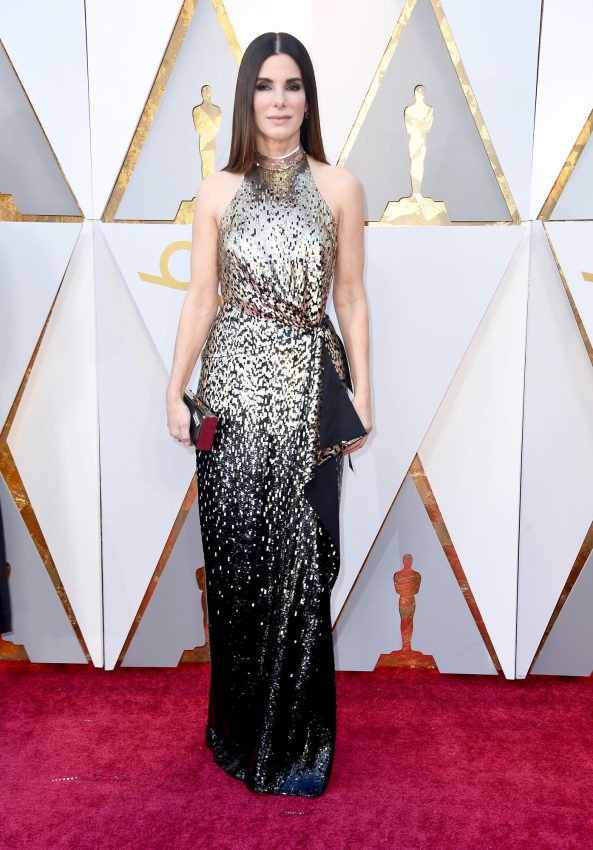 At first, we weren’t so into this gold-meets-black ombre column gown on Sandra Bullock. But at second glance, we think this Louis Vuitton number was one of the most interesting frocks on the Oscars red carpet, with its sleek gold collar, mid-section ruching and cool, shimmering mosaic effect. 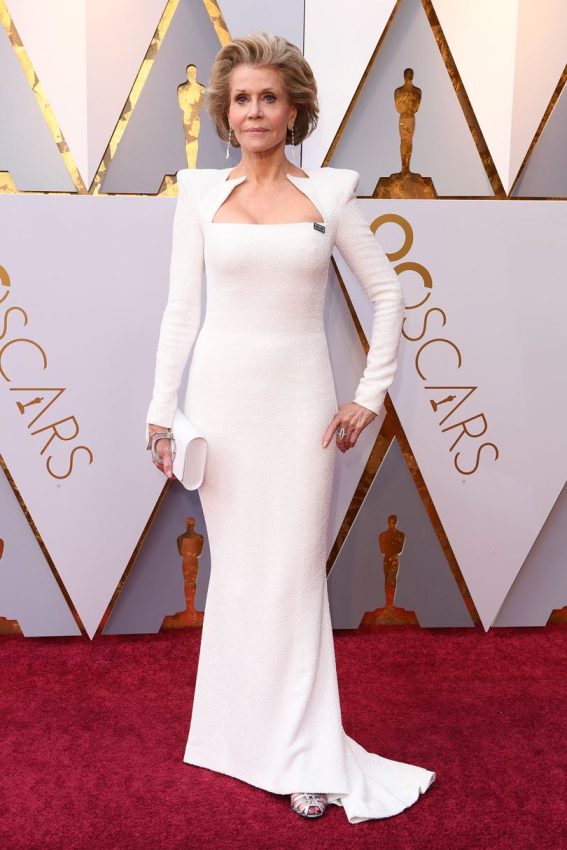 Let us remind you that this woman and OG feminist is 80(!) and showed up pretty much all the other players on the red carpet in the superhero-esque Balmain creation. 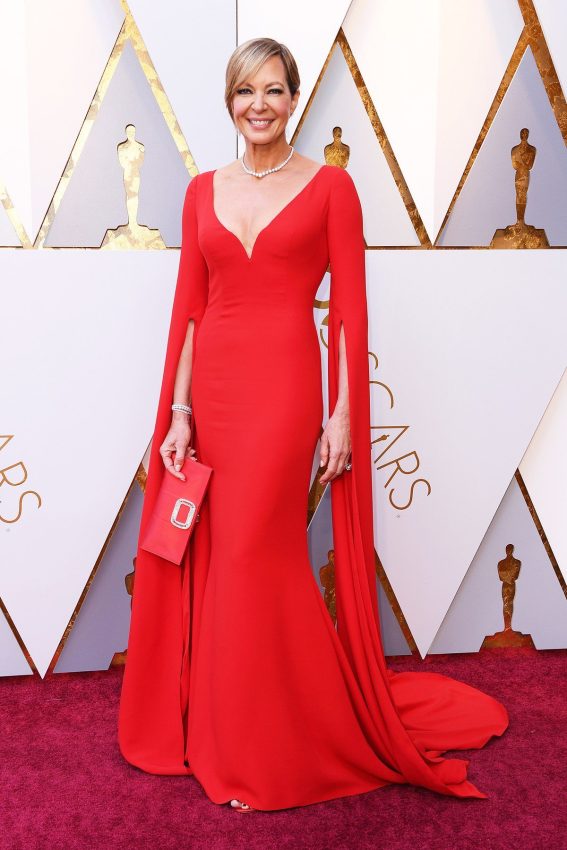 Supporting actress nominee for I, Tonya, Alison Janney, was a close second in the sleek gown category in this dramatic crimson, body-con gown by Reem Acra. 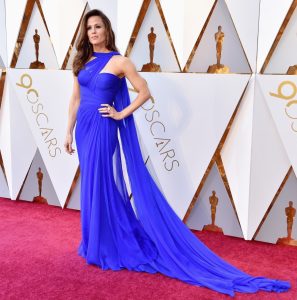 She’s been away from the red carpet for a while, but wow, did Jennifer Garner ever SHOW UP at the Oscars with this electric blue Versace chiffon gown with a bold train and scarf detail. You are back, Jennifer, and we see you! 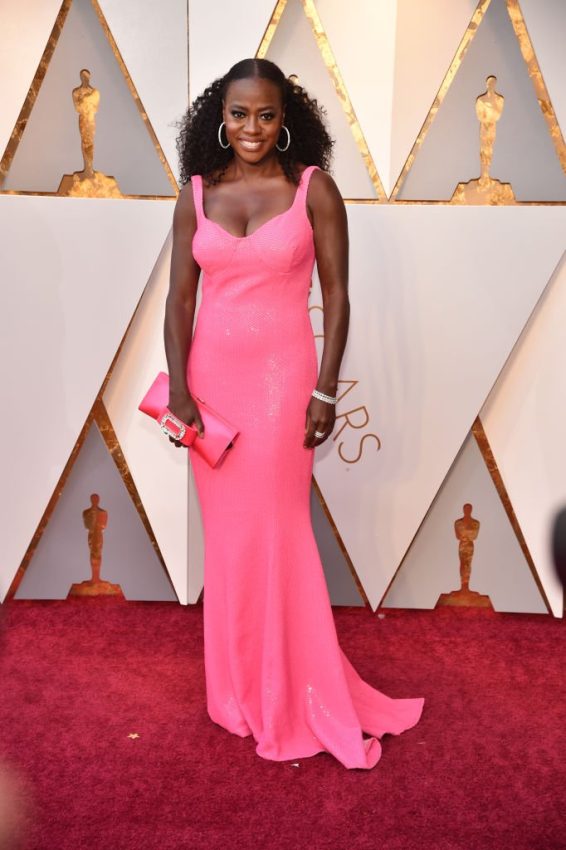 Never one to shy away from colour, Viola Davis went with a totally unexpected and stunning bright bubble-gum pink-hued custom Michael Kors Collection gown and looked like a total bombshell. With natural curls and a matching pink clutch, we think she’s never looked better. 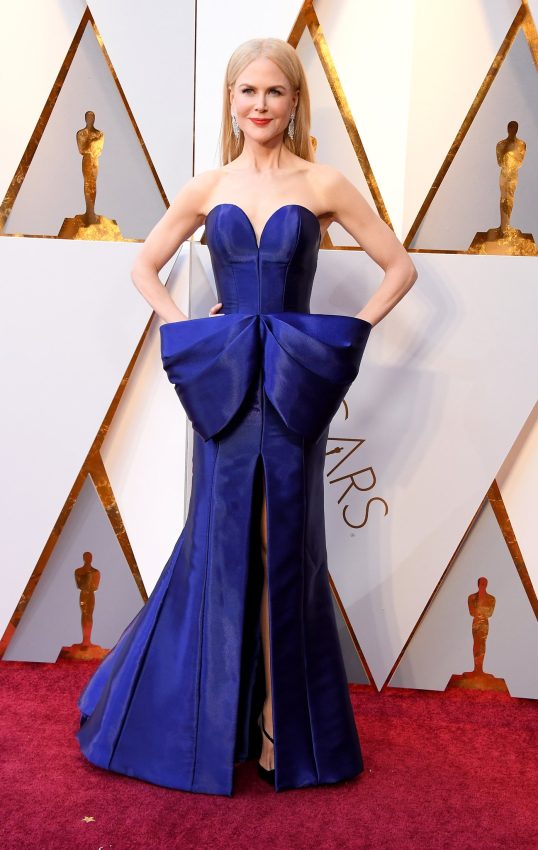 A late arrival on the red carpet, Nicole Kidman SHUT IT DOWN wearing this fantastic strapless indigo Armani Prive blue gown topped with a big ole bow in the front. 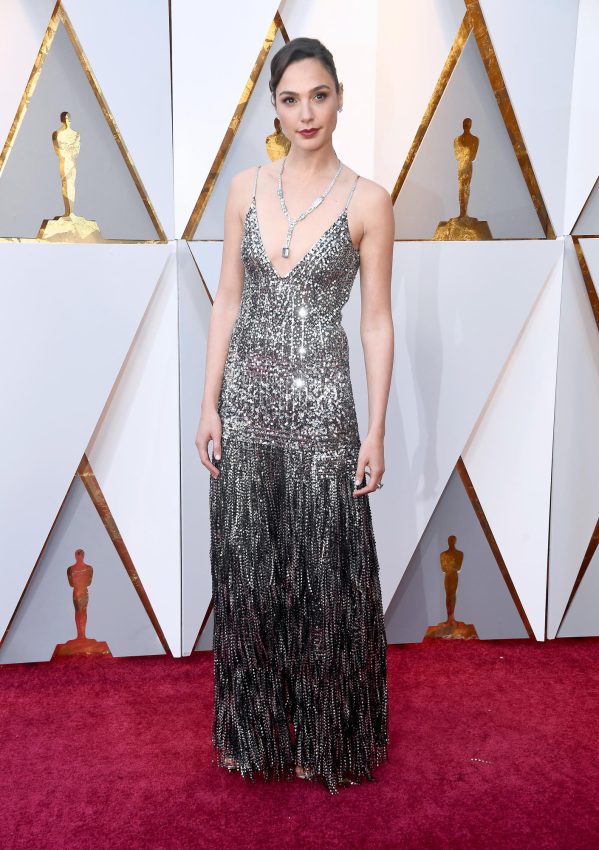 We almost missed this disco-ball-esque beauty (how could we?), but Wonder Woman’s Gal Gadot was one of our absolute faves of the night in this sparkling silver Givenchy gown that picked up the light from each and every angle. We also loved Gadot’s simple updo and jaw-dropping Tiffany & Co. lariat necklace. 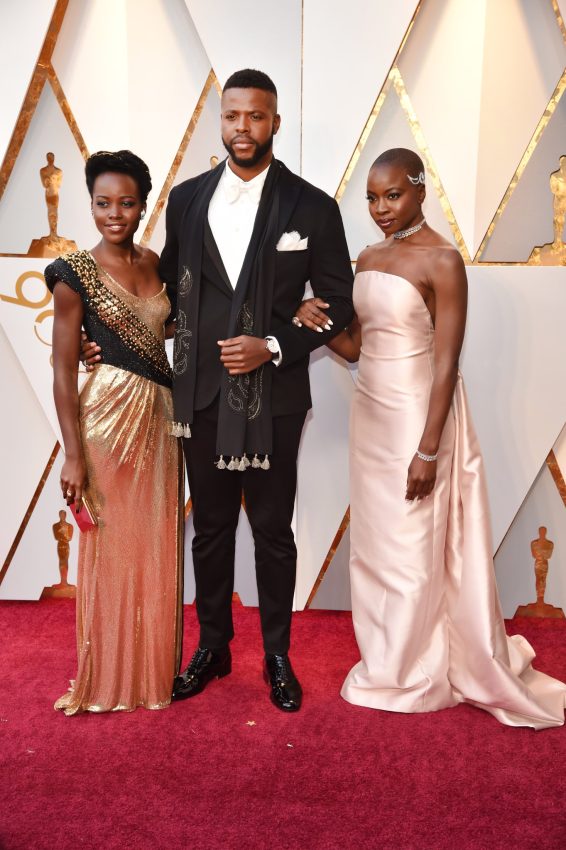 The cultural phenom of the moment, Black Panther, continued its reign beyond the box office, with the cast absolutely slaying at the Oscars. We lived for their looks on the Black Panther premiere press tour, and Lupita Nyong’o, Winston Duke and Danai Gurira delivered again in glimmering gold Atelier Versace, a dapper white-tie Etro tux and a blush column gown by Gabriela Hearst, respectively. 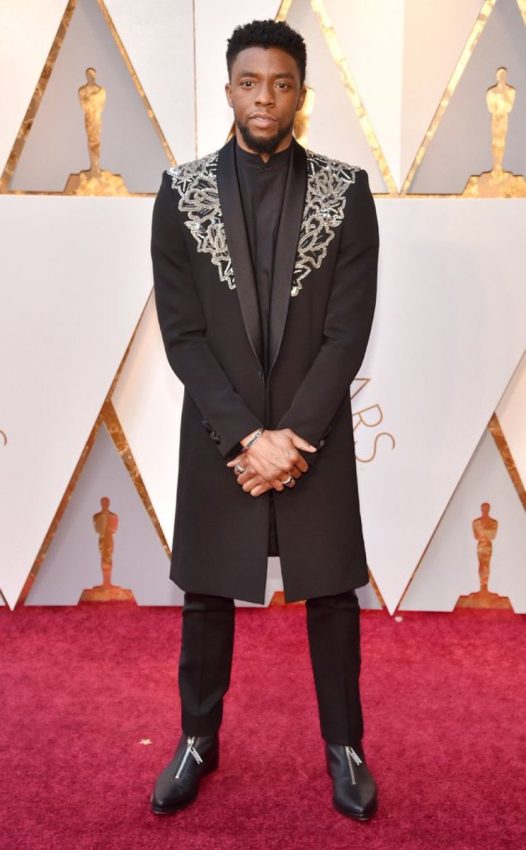 And as for King T’Challa? We still can’t get over Chadwick Boseman’s fantastic topcoat by Givenchy couture (the detailing on the lapel is BEYOND). We’re counting the days until next year’s red carpet just to see what this crew will wear, along with how many little gold men they’re likely to bring home! 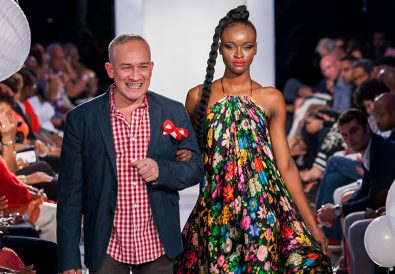 Getting Fashion Right in the Island of All Right 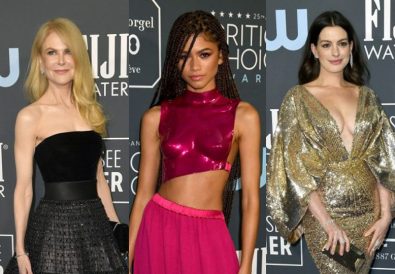 10 Cottage-Chic Pieces to Wear “Up North”