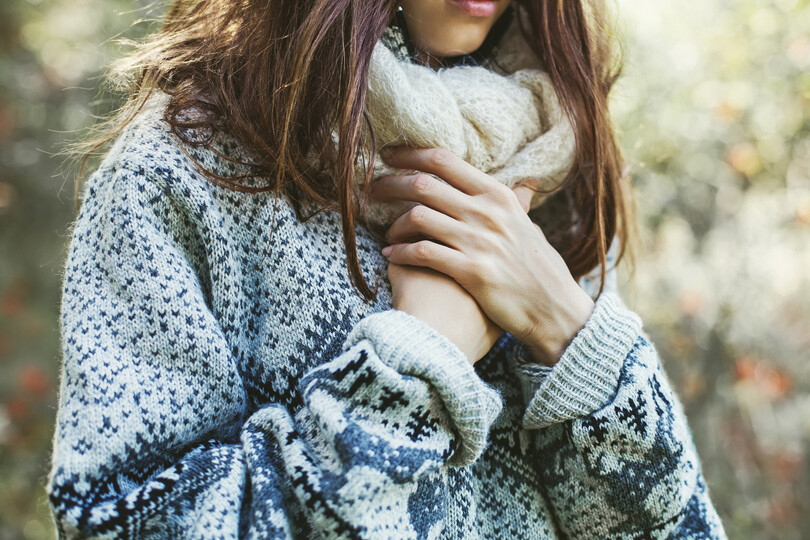 I’d like to congratulate all of us on making it to October. The winter was hellish. The spring was okay. The summer was fine, but the autumn is already freaking me out because I know I will soon have to put my summertime lawn flamingos back in the basement until next year. Terrible. Horrible.

Sweater weather is here, and like every year before it, we are being pushed into particular styles that may or may not seek to harm us. So because I’ve explored every possible avenue of both sweaters and weather over my [redacted] years, I will now use my knowledge to help you avoid the mistakes I’ve made. Turtlenecks? Not for us short-necked folk, I’ll tell you that much for free.

STYLE: BASIC CABLE KNIT
Do you need it? No!
Why: Each year we seem to forget that for several cursed weeks each autumn we put on a cable knit and within an hour (or less), our elbows have stretched out, the length has grown several inches, and you can fit all the Van Trapp children under the mid-area because it is now mammoth. The cable knit is a trick. It sells “cozy” as if we’re supposed to believe that cozy is a cursed trip into the pitfalls of too much stretch. You know those jeans that grow with every step you take in them? Cable knit is its horrifying counterpart.

STYLE: FITTED CARDIGAN
Do you need it? This is very personal, so I can’t tell you this directly
Why: There are two types of people in this world: the people who wear cardigans like shirts, and the people (like me) who once word cardigans like shirts and realized it’s just too much. The thing is, for us lazy people who’ve evolved into glorified teenagers, cardigans are supposed to serve a single purpose: they’re meant to be big enough to make our existing and equally lazy outfit look good. But a fitted cardigan? That is a top. It is a thin, fancy top that looks amazing, but will not keep you warm. Are you into that shit? Then button it all the way up. But are you like me? Who is currently wearing a large plaid over a thermal long sleeved t-shirt? Who untucked said t-shirt from her jeans because it just wasn’t comfortable? Then reject it. Reject the fitted cardigan. Especially when we have . . .

STYLE: THE OVERSIZE CARDIGAN
Do you need it? How dare you think you don’t
Why: Nothing in the world makes sense more than a very large cardigan. I’m talking a thrifted, men’s section, knit cardigan that you know you could drown in, but you do not because you and the cardigan have made a pact to protect each other no matter what. These are cardigans you can wear with even a wedding dress and seem cooler than anybody in attendance, especially the person you’re marrying. These are cardigans you can wear as jackets until you go out one day and realize you’re very cold and it’s a long way back to your home or car and why are you only wearing a t-shirt underneath. But most importantly, these are cardigans you can wear with anything, as anything, and for anything. Plus, if you find one at a thrift store, they are usually only like, $15. Now go forth.

STYLE: TURTLENECKS
Do you need it? Not if you’re short-necked (like me, a short-necked freak)
Why: I will put it this way if you’re not sure as to your neck status: if you have ever put on a sweater and been convinced that it was growing up your neck with intentions to take over your face, mind, body, and soul, turtlenecks are not for you. Also, I have a round face and the combination of a round face with a short neck means that upon putting on a turtleneck, I absolutely look like the moon.

STYLE: OVERSIZE PULLOVERS
Do you need it? You’ve never needed anything more
Why: The colder it gets, the less anybody wants to do anything but put on what could also constitute as a duvet cover or many soft towels sewn together. Ultimately, I want to hide any/all bloat, I want to feel like I’m being spooned, and I want to feel cute-in-a-teen-in-a-nineties-teen-show way, where everyone’s sweaters were massive and it made them look both chic and tough. That said, sweater dresses are a trap and serve only to make you doubt yourself and every choice you have ever made.

STYLE: CAPES
Do you need it? Listen, I don’t know
Why: The thing about capes is that I have absolutely no idea which category to place them in. Are they jackets? Sweaters? An anomaly that I have yet to understand? Yes. To all. Once, I owned a cape. It was beautiful, stunning, and very old, and I relished in feeling like the star of a 1970s drama featuring Al Pacino in his first sensitive role. But I also didn’t know how to carry my bag. And the cape kept blowing around as I walked. And the sleeves I’d chosen didn’t work with the cape, unbeknownst to me, an idiot. So should you get a cape? Wear a cape? Love a cape? Become one with your cape? If you are compelled, I say absolutely. One knows long before they’ve seen a cape that they want a cape. But if like me you got tired upon even thinking of a cape, then join me in the land unto which we belong: the world of hoodies. Not sweaters by any means, but certainly reliable enough not to blow around while walking.