Feisty, confident, aggressive “ every night out is a real life episode of Survivor for a maneater: You’re here to Outwit. Outplay. Outlast. Whether that means sticking with him until the lights come on and everyone else has long gone, nursing your drinks while buying him shots to weaken his resolve, or waiting in his tent at the end of the night wearing nothing but a smile, you get what you want and never take no for an answer.

As if any of the above is not confirmation enough, three more signs that you are a certified maneater:

Maneater Menu: The most unattainable guy in the room
He’s a part-time underwear model, working nights in a lab curing cancer, who isn’t really into brunettes?
Your Olympic-calibre focus and determination can overcome any of these minor hurdles. You don’t even necessarily want that guy, you just want what he represents: the gold medal. Your drive to ˜win’ the best-looking guy in the room may come at the expense of quality time out with girlfriends, but hey, you’ve decided that he’s going home with you, and you always get your way.

Maneater Motto: Use him up, throw him out
A maneater is usually dating a few guys at once, some of them more seriously than others, most with the depth of your standard sidewalk puddle. You consider men good for one thing: ego-boosting! The more willing the guy is to pony up free tickets, nice dinners, weekends away, and exclusive opening night passes, the more likely you are to keep him around. If, however, he ceases catering to you with material gifts and he therefore outlasts his usefulness, the thud will be heard for miles.

Maneater Maxim: A guy with a girlfriend is just more of a challenge
A maneater only worries about societal norms when it’s convenient for her. She dismisses girl-code repeatedly for her own gain. A maneater has no problem catching a guy, it’s keeping him around that’s difficult. So it makes sense for her to be jealous of monogamous, committed relationships and to see them as a test. Maneaters are rarely surprised when friends are protective of their guys; Heck, even Chanel model Vanessa Paradis allegedly asked hubby Johnny Depp to decline a movie role recently. Why? The romantic lead in The Tourist was being played by the ultimate maneater: Angelina Jolie.

Is someone in your life a maneater, to the point where it’s negatively affected your friendship?

Has anyone ever referred to you as a maneater, and do you find the term offensive or empowering? 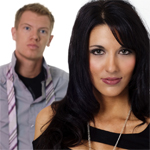 Related Content:
– Is Your Relationship a Power Struggle
– Don’t Be a Doormat
– Are You Clingy or In Control? 5 Signs You are Good in Bed