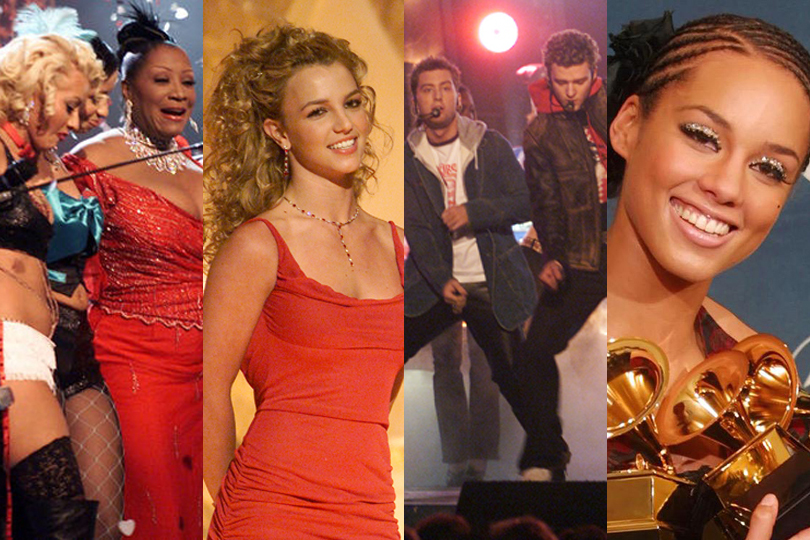 After a Covid-related delay that saw the ceremony postponed from its original date in January, the 2022 Grammy Awards go down this Sunday night. If nothing else, the events that transpired at last weekend’s Oscars taught us that trying to predict what happens at even the most benign of awards show is a fool’s errand, so instead of looking to the future, we’re climbing into the DeLorean and looking back, 20 years in fact, to a simpler time when Motorola phones, Von Dutch trucker hats, bubble gum pink Juicy Couture tracksuits, and low rise jeans reigned supreme. What a time to be alive.

Picture it: February 27th, Los Angeles, 2002. The 44th annual Grammy Awards are happening at the Staples Center. Jon Stewart, then host of The Daily Show, is the master of ceremonies for the second year in a row (coincidentally, the current host of The Daily Show, Trevor Noah, is at the helm of the 2022 Grammys for the second year in a row) Jokes aside, it actually wasn’t a simpler time, the 2002 Grammys were the first to be held after the devastating terrorist attacks of September 11, 2001 and U2, fresh off their emotional Super Bowl halftime show where they paid tribute to the victims of the attacks, open the Grammys. The band also goes into the night with the most nominations (8) for their album, All That You Can’t Leave Behind. Alicia Keys is the other big nominee of the evening after the blockbuster success of her debut album, Songs In A Minor.

Let’s break down some of the notable moments of the night, shall we? Jon Stewart Strips on Stage
In early 2022, America was still under a heightened sense of security post-terrorist attacks and host Jon Stewart had some fun with the additional safety measures, stripping down to his underwear and socks on stage as part of a mock security check. “Remember when security was tight because Eminem was going to sing with Elton John?” he exclaimed, referring to the controversial duet at the 2001 ceremony, “those were the days weren’t they, folks?” 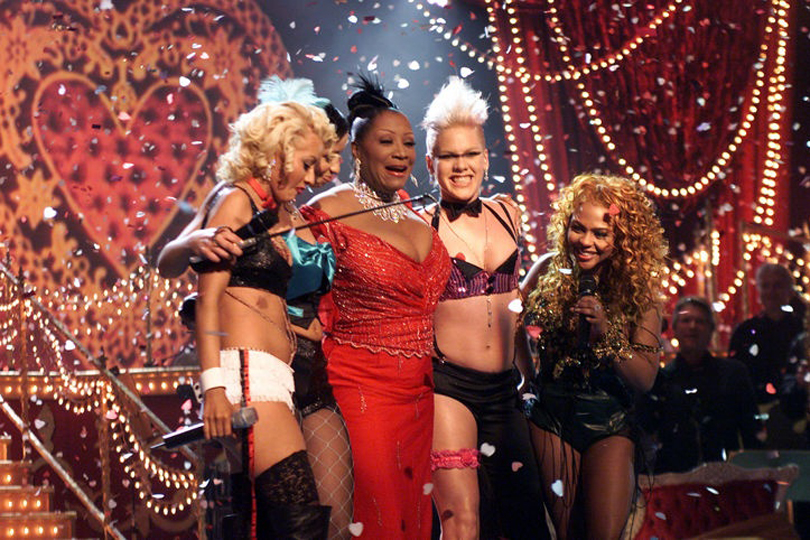 Four Badass Chicks From The Moulin Rouge
In probably the night’s most spectacular performance, Mya, Pink, Lil’ Kim, and Christina Aguilera blew the roof off the place with a pitch perfect performance of their smash single, “Lady Marmalade,” from the Moulin Rouge soundtrack. With the stage decked out in the style of the 2001 Baz Luhrmann film, the audience, already eating out of the palms of these women’s hands, positively popped off when Missy Elliott appeared and when Patti LaBelle, singer of the original 1974 version of the single, rose up in ravishing red during the song’s conclusion? Well, wigs were SNATCHED and history was made, honey… Hey sister, go sister, soul sister, go sister, indeed. 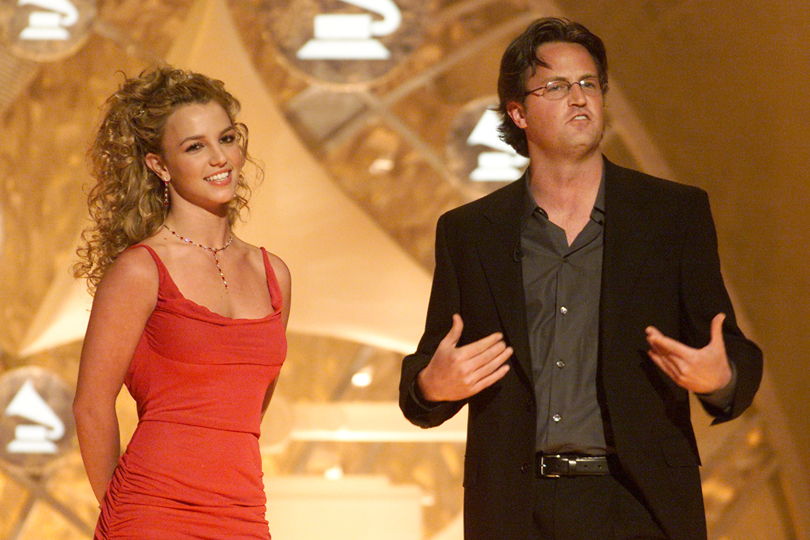 Could This Pairing BE Any More Random?
Not sure if these two were “friends” in real life but a pre-conservatorship Britney Spears and Friends star Matthew Perry were randomly paired together to present the very first award of the night for Best Pop Performance by a Duo or Group with Vocals which, by the way, went to U2 for their song, “Stuck In a Moment You Can’t Get Out Of.” The band was still backstage after opening the show with a performance of their song, Walk On. Getting *NSync with Nelly
Whether we knew it or not, *NSync was about to go out of sync because Justin Timberlake was gestating his first solo album, Justified, which would come screaming into the world less than nine months later, effectively putting the nail in the coffin in the future of the boy band. But on February 27th, 2002, all was still right in the *Nsynceverse as the boys took to the stage to perform a portion of their hit song “Gone” before being joined by Nelly (back when he still rocked that trademark bandage on his face!) for an infectious and rousing performance of the remix of their song, “Girlfriend.” We were still two years away from Justin hanging Janet Jackson out to dry following the infamous wardrobe malfunction at the 2004 Super Bowl halftime show so we still had time for Justin back then. Things have, uhm, changed since then.

O Brother, I Bet You Don’t Remember This!
If you had to speculate about which artist won Album of the Year in 2002, how long would it take you to arrive at the answer, the O Brother, Where Art Thou soundtrack? I’m a pop culture savant and honestly, it would take a pharmacy worth of ginkgo biloba, a ouija board, a time machine, and a skilled hypnotist  for me to accurately remember this. But yes, the soundtrack to the Coen Brothers movie starring George Clooney and featuring The Soggy Bottom Boys on the mic won, what is commonly considered, the top award of the night. This is your cue to queue up I Am A Man of Constant Sorrow and judge for yourself. In its defense, the album did chart at number one on the Billboard 2000 and featured the work of legendary producer Joseph Henry “T Bone” Burnett. 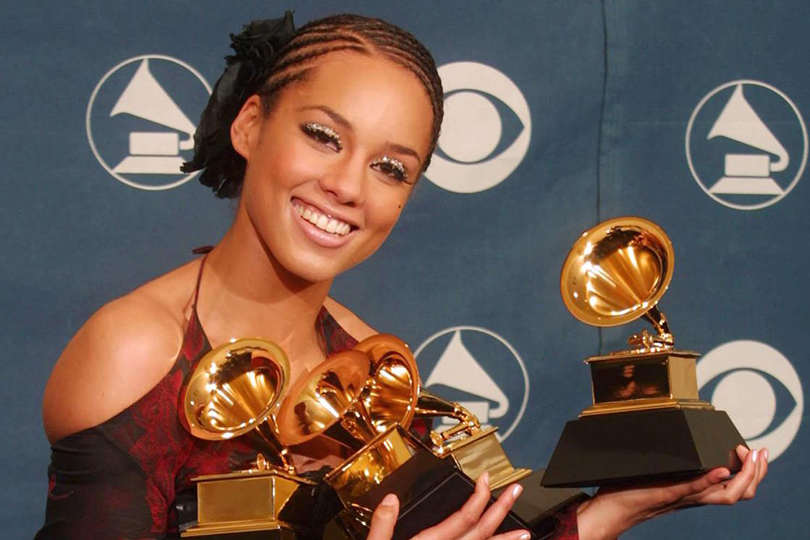 Alicia Keys Takes The Night
No one ruled the night of February 27th, 2022 quite like Alicia Augello Cook aka Alicia Keys. The songstress walked away with five Grammys: Best New Artist, Best Female R&B Performance, Song of The Year, Best R&B Song, and Best R&B Album. Photos of Alicia posing with all five of her Grammys conjured up memories of the 1999 ceremony when Lauryn Hill won multiple awards for her brilliant album, The Miseducation of Lauryn Hill. The image of “woman balancing multiple Grammy awards” would be repeated the next year when Norah Jones won five statues for her album, Come Away With Me, then again in 2004 when Beyonce won multiple awards for her solo debut, Dangerously In Love, and in both 2012 and 2017 when Adele swept for her respective albums, 21, and 25. 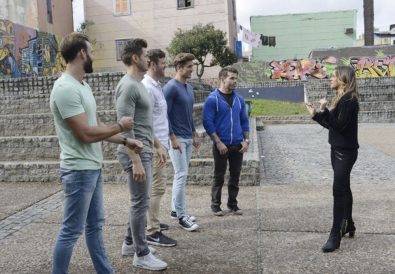 10 F*cked Up Things That Happened on The Bachelorette: Season 12, Episode 6