When Do We Quit Terry Richardson?

Terry Richardson's track record isn't exactly a shining beacon of hope. He's been accused of everything from co-ercing female models into performing and/or receiving sexual acts to committing straight-up sexual assault and yet the industry continues to book him. Or at least they were, anyway.

This past weekend, model Emma Appleton shared her Richardson experience via a screencap on Twitter (which has since been deleted), which showed how the photographer told her that if she'd have sex with him, he'd be able to book her for a shoot in American Vogue. This is especially interesting because American Vogue hasn't worked with Richardson since 2010, and went on record yesterday saying they had "no plans to work with him in the future."

Meanwhile, a rep for the photog claimed the screenshot was "obviously fake" and that "Terry did not send this text." This led to Appleton herself making a statement on Instagram, admitting that she was unsure if Richardson was actually the texter in question, and that she regretted posting the text because of the response she received. However, the response was enough for H&M and Equinox to publicly state they also don't plan to work with him in the future. Meaning . . . finally?

Terry Richardson is hardly the first man to objectify, harass, and assault women as part of a twisted power dynamic (congratulations, 2014!), but when a photographer's legacy is synonymous with abuse, isn't it somebody's responsibility to, well, shut that shit down? Shouldn't, say, Beyonce (feminist advocate) also step up and refuse to be shot by Richardson in the future? Shouldn't Lady Gaga (an artist renowned for her stance on equality) shoot down Richardson as the director of her documentary? Shouldn't Lena Dunham politely decline to appear on the same side of a camera that many other women have been, but who have suffered at the hands of that same person shooting them? At what point do we take these allegations seriously and actually do something (see: refusing to work with him, freezing him out of the industry ala Vogue, refusing to buy anything he's had a hand in) as opposed to condemning him on the Internet then going on to affirm that behaviour like his will not only be tolerated, but rewarded. (Example: Yeah, I mean, sure you can treat women like trash, but yes, absolutely we will work with you, sir.)

And I get it: standing up for shit is terrifying. Nine of the ten times, your reasons for not wanting to do a thing are greeted with an eye roll or a "come on!" but also, those reactions tend to be handed out by the worst possbile human beings. Only a monster would greet you or I not wanting to buy anything Terry Richardson has had a hand in creating with "get over it!" — especially when allegations have been mounting against him since, well . . . haven't they always been?

Yes, Terry Richardson is a "hip" photographer. Sure, he's got "connections." (I just threw up.) But guess what: so do a lot of people. Why? Because the world is a big place. Maybe Richardson didn't send that text, but whether he did or did not isn't the point this time. At the most (and most upsettingly), Appleton is another person in a long line of Richardson victims. At the least, she is a reminder of what he has (allegedly) done, what he is (allegedly) capable of, and what he will (allegedly) continue to do again. And at the rate things are going, should he stop? Our's, the industry's, and various celebrties' support is more than enough permission for him to proceed — he keeps getting work and doing things his way, and it's taken years for Vogue to publicly denounce him. (Despite not having worked with him for four.)

If Vogue can do it, so can we. It's simple: we don't consume his work, and we don't tolerate his bullshit. Crusading against celebrities who've worked with him may feel like the right choice, but ultimately, they're doing their own things at the hands of their own publicists, agents, managers, and moral compasses. They're doing them. Our role is easy: we find out if he shot something, and if he did, we stay the fuck away. Buying into his work is buying even more into rape culture.

So here's hoping this — this recent allegation, this statement from Vogue, this feeling of frustration — is the kick he gets. Both the one out of the fashion industry, and one into a courtroom. Or again, at the very least, out of blogs and news sites. We've wasted too much time typing his name without the word "arrested" at the end. 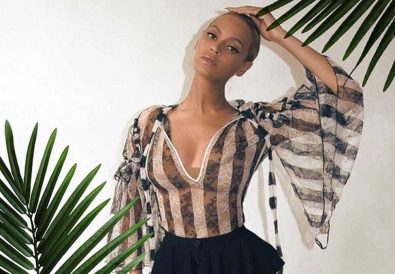