And Just Like That: We Couldn’t Help But Wonder, Why? 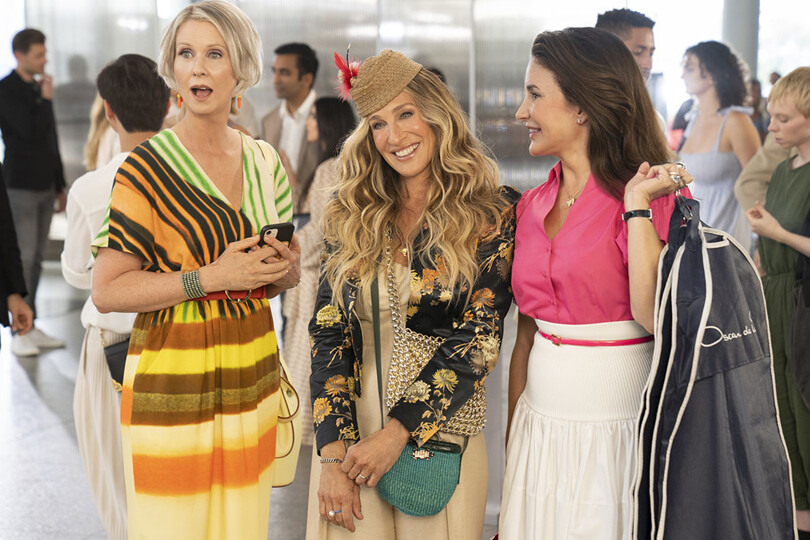 Warning: this piece contains spoilers from the first two episodes of And Just Like That…. But who are we kidding, you’ve already watched them, right?

And just like that we are reunited with our gals from Sex and the City. Well, three of the four, anyway as Kim Cattrall famously said “that’s a no from me, dawg” to revisiting her iconic Samantha Jones character and reuniting onscreen with Sarah Jessica Parker. Samantha’s absence is explained early on in episode one: she and Carrie had a falling out after Carrie no longer required Samantha’s public relations services and Samantha, her ego bruised, fled to London and cut off contact with all three of them. It feels like betrayal of a character whose friendships were always of utmost importance to her. To ghost her beloved ladies over a perceived slight is seriously off-brand for Samantha, who, along with Miranda, was always the more emotionally mature of the quartet. 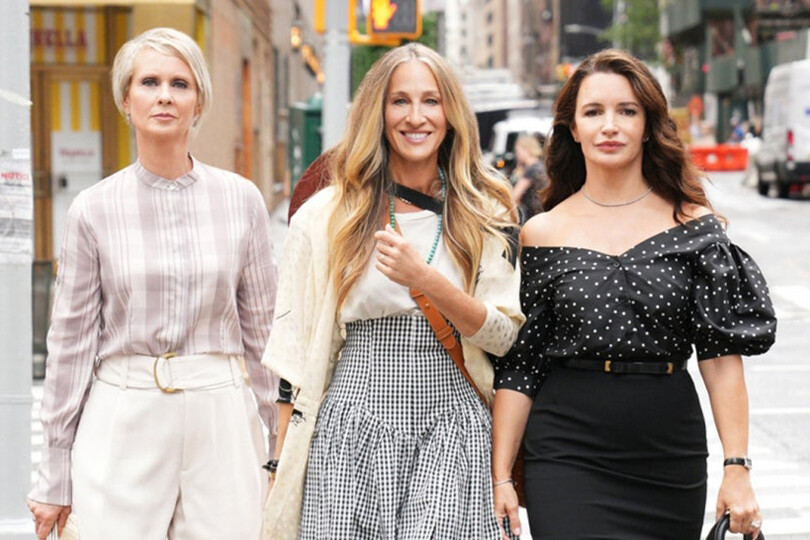 I was hoping the series would delve into the grief women often experience after a longtime and meaningful friendship reaches its conclusion. The end of a 14-year-long friendship remains my most significant breakup and, dear reader, I am divorced. Platonic breakups is a topic not often explored in pop culture, with the demise of romantic relationships always treated as the more devastating of the two, and there is much material to be mined from it. Trust me when I say, Samantha is dearly missed, not only by Carrie, but by the audience, too. The series is just not the same without her. 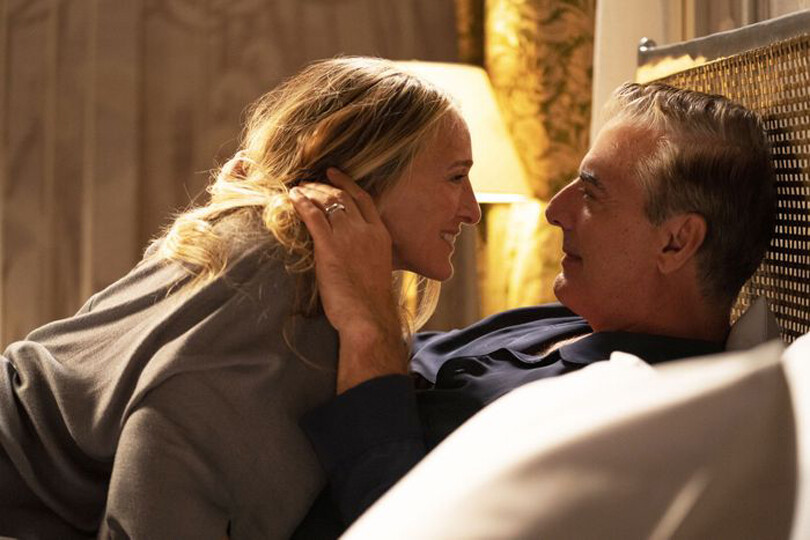 Instead, it seems, And Just Like That… will focus on Carrie’s grief after losing her beloved Big, not Samantha, as, at the end of the first episode, Big succumbs to a heart attack after an intense session on his Peloton. Carrie’s signature voiceover is only present in the episode’s final moments as she says, “and just like that, Big died.” I mean, maybe calling 9-1-1 or fetching his nitroglycerin pills would have helped Carrie, but sure, doing nothing is also a choice. Twitter went wild over killing off such a longtime main character and the fact that Peloton had to release a statement on its role in the death of a fictional fucking character, is funnier than anything we’ve seen so far in And Just Like That. It’s also a testament to the cultural impact of the Sex and The City brand. Chris Noth has already appeared in a hilarious send up Peloton ad made by Ryan Reynolds’ lightning fast viral ad making agency, Maximum Effort.

It will be interesting to see how Carrie navigates being a widow, single again in a world that has changed dramatically since she was running around after men in Manhattan clad in her Manolos. But whether it’ll be interesting enough to make up for some of this new show’s shortcomings remains to be seen. Done properly, And Just Like That could have (any maybe still can?) helped us to Eternal Sunshine the two Sex and The City movies from our collective memories, the first film, wholly unnecessarly and decidedly dumb, but ultimately a rather harmless romp, the second, a veritable cinematic hate crime whose only redeeming factor is giving us this seriously scintillatingly scathing review penned by the brilliant Lindy West, a piece of writing so deliciously daming, so purely poetic in its snark, it qualifies as a piece of art and should be hanging in the MOMA.

The original Sex and the City was iconic and groundbreaking, and while certain parts of the original haven’t aged well (its inexplicable whiteness, its bisexual erasure, its rampant, almost gross consumerism, and its representation of trans people just to name a few) at the time it felt fresh, frank, and a whole lotta fun. And Just Like That…, the first two episodes, anway, offers none of the above. In a post-WAP world, it’s easy to forget how subversive it was during the original show’s run to portray women as unapologetic sexual beings who discussed things blow jobs, funky spunk, golden showers, and butt stuff over brunch. And Just Like That… feels awkward and clunky, like it’s trying too hard to adapt to the current times, the limited series version of “I’m not a regular mom, I’m a cool mom.” And Just Like That reminds us that Sex and the City was very much of a time. And that time, just like Big, has passed. 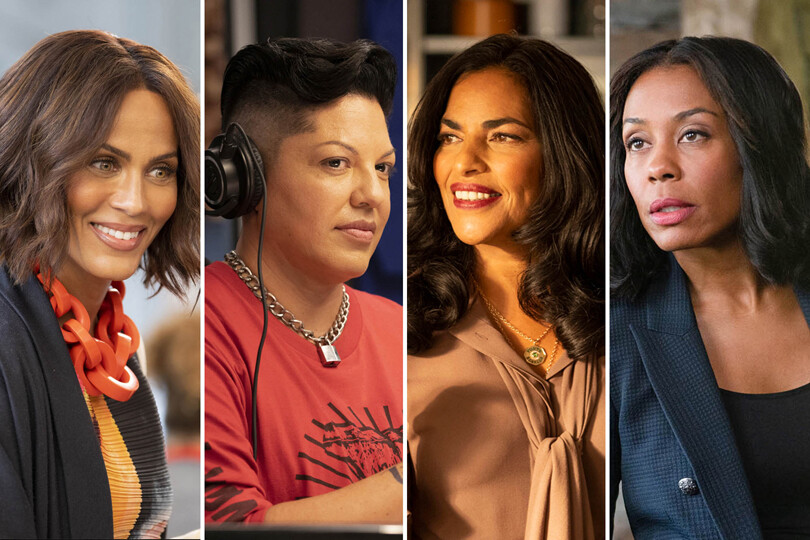 The characters of colour on And Just Like That… feel shoe-horned into the cast as a response to the aforementioned (and completely valid) criticism of the original show’s distinct lack of melanin despite being set in one of the most multicultural and diverse cities in the world. Grey’s Anatomy alum Sara Rodriguez as Che, a Mexican, queer non-binary standup comic, might be a refreshing representation of queer folk outside the stereotypical flamboyant gay bestie roles fulfulled by Stanford and Anthony if the character didn’t feel so forced and inorganic, like showrunner Michael Patrick King threw several darts at a diversity board to see where they’d land. Miranda fumbling her initial reactions with her Black professor at Columbia University is especially cringeworthy. Miranda, have you not met a Black person or rather, any people at all before? Why is she acting this way? Charlotte, meanwhile, when she isn’t making Big’s death all about her and bullying daughter Rose into wearing a dress, seems overly eager to befriend another mother at her daughter’s posh private school just so she can say, “See! I too have a Black friend!” Oof. The main characters are so clearly uncomfortable and ill at ease in the current climate, it’s embarrassing. Is watching three overly-privileged white women try to navigate this brave new “woke” world entertaining? I’d argue no, it’s not. And just like that I couldn’t help but wonder why this new series needed to be made at all? Kudos to Kim Cattrall for opting out and snaps to Chris Noth who peaced out after episode one.

Still, there is something strangely comforting about reuniting and spending time with these characters and as much as I want to say, “I’m sorry, I can’t, don’t hate me,” I find myself unable to completely walk away from them like Samantha did. I’m Jack Twist and these characters are my Ennis Del Mar, I wish I knew how to quit them. So, is this Sex and the City reboot necessary in this, the year of our Lord, 2021? Oh, most definitely not. Is it good? Meh. Will I religiously watch the remaining eight episodes of And Just Like That…? In the immortal words of the very mortal John James Preston, abso-fucking-lutely.

RELATED:
– THE STORY OF: The Tutu In The Opening Credits Of Sex And The City

Tags: And Just Like That, sex and the city, top story, topstory 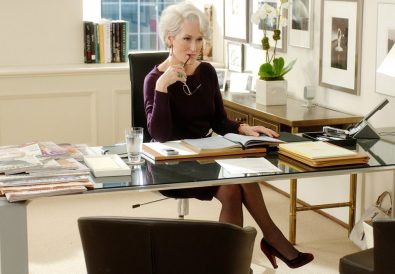 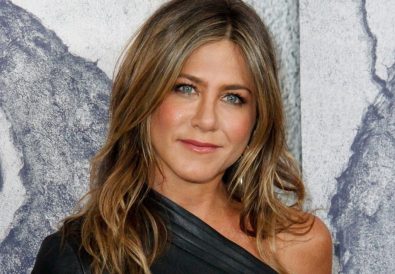 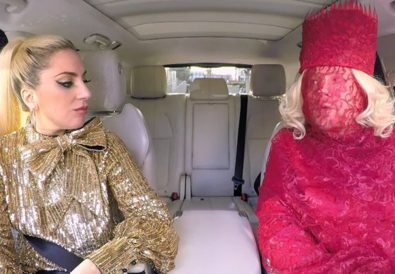