And with those words, on May 25th 2011, Oprah Winfrey signed off on The Oprah Winfrey Show after 25 years and 4,561 episodes. It’s an undeniably impressive run on television but what may be even more impressive is that in the 10 years since she bid farewell, no one else has really stepped up to take the reins as the reigning Queen of Daytime. Many have tried, one has come close, but many more have come and gone without succeeding as a proper successor to Oprah.

The Oprah Winfrey Show premiered live from Chicago on September 8th, 1986, making Oprah the first woman of colour to host her own nationally-broadcast daytime talk show. “I was beyond excited and as you all may expect, a little nervous” Oprah recalled in an episode of her show’s 24th season when she revealed the next season would be her last, “I knew then what a miraculous opportunity I had been given, but I certainly could never have imagined the yellow brick road of blessings that have lead me to this moment.” It has indeed been a yellow brick road, one no one else has managed to walk as Oprah’s shoes, though not ruby red, seem ultimately impossible to fill.

The realization, or rather, a reminder that Oprah just might be an irreplaceable GOAT came when she sat down to interview Harry and Meghan, the Duke and Duchess of Sussex in an explosive primetime special in March. In a wrap up of the interview, a BBC reporter declared, “whatever you think about the couple’s revelations, in purely journalistic terms, Oprah delivered a masterpiece of an interview. “Vanity Fair reported, “it feels great to have Oprah Winfrey back” while the website Vox declared that Oprah was “the only person who could conduct the Harry and Meghan interview,” citing “her status, her skill, and her long history of being great on television,” adding “what’s impressive about Oprah, specifically, is the way she has maintained her go-to interviewer status throughout an era when the rise of streaming networks means that broadcast television has less of a daily presence in American life.”

Of course, The Oprah Winfrey Show existed in the time before streaming, when “appointment television” was still a thing and, over the course of her 25-year reign, we made countless appointments to tune into Oprah. So what was it about Oprah that made her show so inherently watchable, so captivating she spawned a legion of devoted fans who worship her to this day?

When Oprah first hit the airwaves, daytime wasn’t as saturated as it would later become in the ’90s. Phil Donahue was pretty much dominating the ratings and regularly regarded as the King of Daytime. Oprah herself has credited Donahue as an undeniable influence, saying on her website, “I have said many times before, if it weren’t for Phil Donahue, there would never have been an Oprah show.” Filmed far away from the entertainment hubs of Los Angeles and New York (first in Dayton, Ohio and then later in Chicago from where Oprah would later base her own show) Donahue didn’t have access to big-name celebrities, featuring regular people on his show instead as well as letting audience members chime in with questions, telling the Television Academy in 2001, “I realized during the commercials that these people in the audience were asking better questions that I was. So about the third or fourth show, I went out into the audience and it saved us. There would’ve been no Donahue show without that studio audience.” Featuring regular people with fascinating stories and opening up the floor to audience questions were methods Oprah would later replicate and perfect. Of course Oprah would also become known for many notable celebrity interviews over the years as well (appearances buy Tina Turner, Mary Tyler Moore, Jennifer Aniston, Whitney Houston, her star-studded 50th birthday bash and, of course, Tom Cruise and the couch jump viewed around the world, were just a few celeb standout moments) 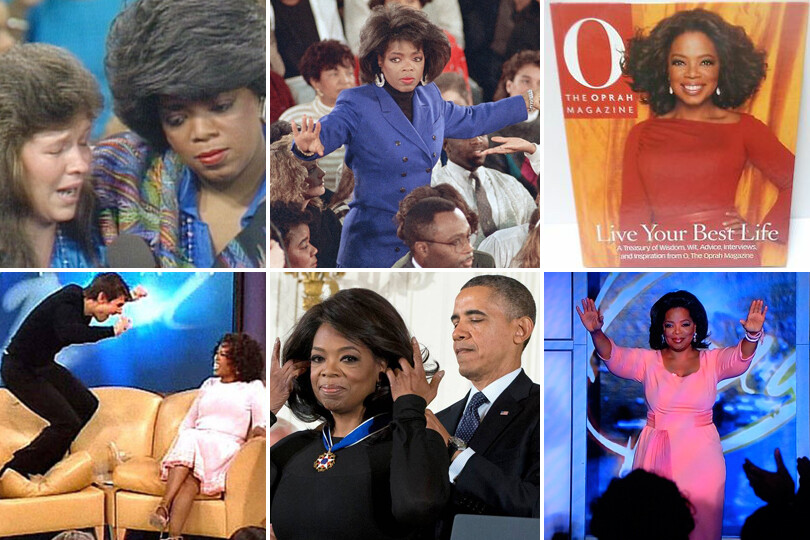 But what set Oprah apart from her contemporaries (a crowded field which would eventually include Jenny Jones, Sally Jesse Raphael, and Ricky Lake, just to name a few) was her willingness to open up and be as vulnerable as the guests on her stage. Early on in her show’s run, during the show’s first season, on November 10th, 1986 to be precise, during an episode about sex abuse victims and their molesters, Oprah bravely revealed that she herself had been raped by a relative when she was just nine-years-old. Oprah was also open with her audience about her struggles with weight, in 1998 famously rolling out that wagon of fat, 67 pounds of it to be exact, to represent the number of pounds she had shed after an intense diet. The stunt wouldn’t mark the end of Oprah’s issues with weight (as most diets notoriously have a low long-term success rate) but her ongoing weight struggle only helped to make her more relatable to her viewers. Even as her fame and notoriety increased, Oprah never shied away revealing personal details and secrets about herself and her family including in 2011 when she introduced her audience to the half-sister she had only become aware of months earlier. Oprah was never afraid to cry right alongside her guests and her viewers ate it up and cried right along with her from their living rooms and not just a single tear streaming down a cheek, we’re talking full body-heaving sobs and ugly cries. The Oprah Winfrey Show wasn’t just a talk show, it was a daily hour-long group therapy session.

While the talk show landscape became more trashy, tawdry and tabloidesque in the ’90s, Oprah decided to take a different path. Instead of competing with the likes of Geraldo, Jerry Springer, or Maury Povich for the most sensationalist stories and guests, Oprah took the opposite route, instead using her show as a beacon of positivity, encouraging viewers to practice daily gratitude, find their joy, perform acts of service, and generally live their best lives. While some may have found this new Guru version of Oprah to be preachy, her audience found her to be a true source of inspiration. And even when her stardom, influence, and personal wealth reached epic proportions (according to Forbes magazine, in 2003 Oprah became the first Black female billionaire) she somehow still managed to retain that relatability that proved so popular with fans. Conversely, fellow life coach and motivational speaker Rachel Hollis found herself in hot water (where she remains today) earlier this year when, after years of creating a multi-million dollar empire built on her relatability with books like “Girl, Wash Your Face” she declared herself to be proudly unrelatable in an unhinged (and since-deleted) TikTok video where she goes on to say, “if my life is relatable to most people, I’m doing it wrong.”

Oprah, on the other hand, despite her billions of dollars and rolodex of celebrity friends and worshippers, has always worked extra hard to maintain her relatability and the image that she is no more important than any of us. Whether genuine or not, and only her inner circle would know for sure, Oprah has always carried an air of authenticity, an impressive feat given her vast fame and fortune and endless accolades which include multiple Emmy Awards, honourary doctorate degrees from both Duke and Harvard Universities, the Cecil B. DeMille Award, the Presidential Medal of Freedom Award from President Barack Obama, and a Smithsonian exhibit dedicated to her.

Oprah’s impressive achievements couldn’t be any less relatable yet it’s still an image she’s maintained this entire time while others haven’t been as successful – most recently and more specifically, Ellen DeGeneres. Ellen is probably the closest anyone has come to being a true successor to Oprah and new Queen of Daytime (it was no surprise seeing Oprah featured in a recent episode of Ellen’s show where the talk titan announced her next season, the show’s 19th, would, in fact, be her last) but while Oprah has managed to maintain her image all these years with her legacy very much in tact, Ellen is bowing out with her own legacy in question amidst a swirl of controversy with reports of her show being a toxic mess of a workplace and Ellen herself being the “Queen of Mean.” Not a great look for a woman who has signed off every show with “be kind to one another.” Oprah meanwhile, once served as maid of honour at a staffer’s wedding, an event for which she fit the bill. Indeed, Oprah has always given off the vibe that she practices what she preaches and in the ten years since she signed off, no one has come forward to dispel that belief. In a 2001 Time magazine piece profiling her phenomenal success and growing empire Oprah herself spoke of the importance of relatability saying, “there is a commonality in human experience, if it’s happened to one person, it has happened to thousands of others.” And while yes, Oprah is responsible for unleashing the likes of Dr. Phil and Dr. Oz into an unsuspecting, and debatably undeserving world, with Oprah, the good has always far outweighed the bad.