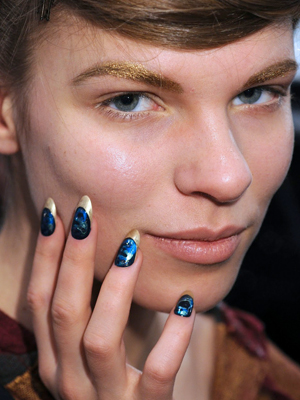 When not to adopt the season’s top trend

With such a focus on the bright and bold spectrum this season, new life has been breathed into nail colours since the play it safe qualities of French manicures and clear varnish have been trumped by neons, darks and art deco. However, while adhering to seasonal in’s may seem foolproof and free of wrongdoing, there are certain looks that should be avoided “ but luckily, instead of letting you test the theory on yourself, we’ve given you the list of don’ts when lacquering up.

Once upon a time, chipped nail polish represented rebellion, street style and Lindsay Lohan pre-modern day. However, with such a push on clean lines in terms of fashion, to harbor grungy, neglected nails this season (or ever) is to do a disservice to you “ especially since bright colours normally represent freshness and new starts. Thus, if you’re starting to chip, take it off and replace with a clear coat until you can repaint “ or use chipped polish as an excuse to invest in a new colour that you’re excited to test out.

We saw the resurgence of 60s-esque art deco nails on runways and on sidewalks this year, but when it comes to painting each finger a different shade, it’s time to keep childhood habits to a minimum and choose one. While uniqueness and freedom of expression are traits to be championed, painting each nail a different colour is not only distracting, but also exudes immaturity. And even though that’s clearly not the case, a boss or potential employer may think otherwise.

On top of the bright colour revival of 2011, bedazzled ultra-long nails saw a comeback this spring, and if you’re gutsy enough to try them out, you’ll want to shy away from the super-bright shades being championed this season. True, statement nails are meant to be noticed, but if you’re already donning your favourite lime tone, the combination of length and gems may serve only to exude the Peggy Bundy vibe. And while her flair for prints and penchant for tights are admirable, there’s certain qualities you may want to skip out on.

Most of the time bright nail colour can be worn without worry, but on certain occasions, it may be best to play it neutral or to opt for a colour with a little more drama. Business meetings or upscale offices may not share your affinity for yellow or indigo, so stick to classics like black, burgundy and red throughout the week. Somber situations or certain family get-togethers are also more neutral appropriate, with bright tones or art deco better substituted for clear varnish or nothing at all. Sadly, not everyone appreciates Carnaby Street circa 1965 “ and sometimes it’s just not worth testing boundaries. 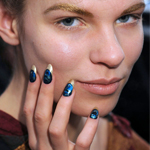