THE STORY OF: Elizabeth Hurley And The Versace Safety Pin Dress 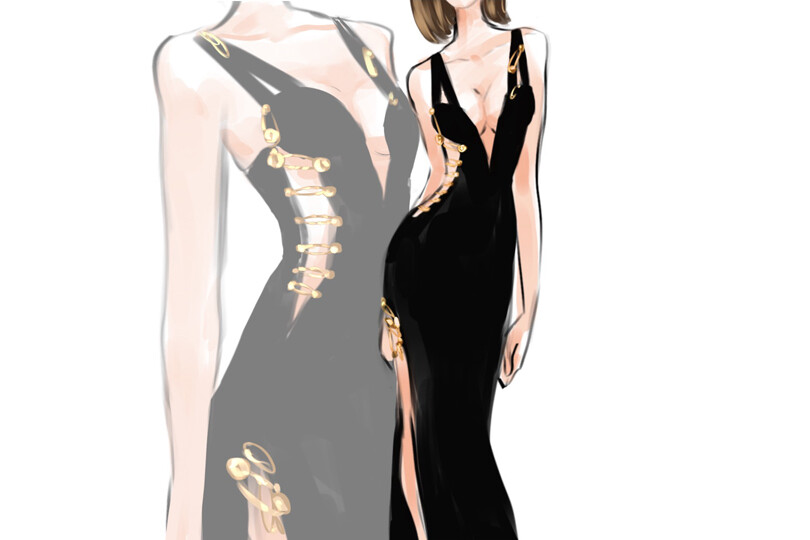 It was the spring of 1994 when of-the-moment English heartthrob Hugh Grant was upstaged at the premiere of his soon-to-be-hit film Four Weddings and a Funeral – not by a co-star or his sultry date, Elizabeth “Liz” Hurley, but by the black Versace safety pin dress that would turn her into an overnight star. We’ve all seen countless images of Hurley stepping out on the red carpet wearing the risqué gown…but how much do you really know about the dress that became one of the most iconic pop culture moments of the ’90s?

On the runway
Versace’s black safety pin dress was originally shown as part of the label’s Spring/Summer 1994 runway collection, which was debuted during Milan Fashion Week. The show started simply enough, with tailored daytime suits (the skirts closed with a single pin) being modelled down the runway. But as the show proceeded, the pins grew larger and more numerous. By the end there were risqué slits and slashes on Versace’s dresses, and daring gowns were seemingly held together only by oversized pins. The entire collection, especially those final pieces, were reminiscent of the label’s boundary-pushing Fall/Winter 1992 “Bondage” collection (provocatively titled Miss S&M), where fetish-wear got the high-fashion treatment…but this collection was more provocative. 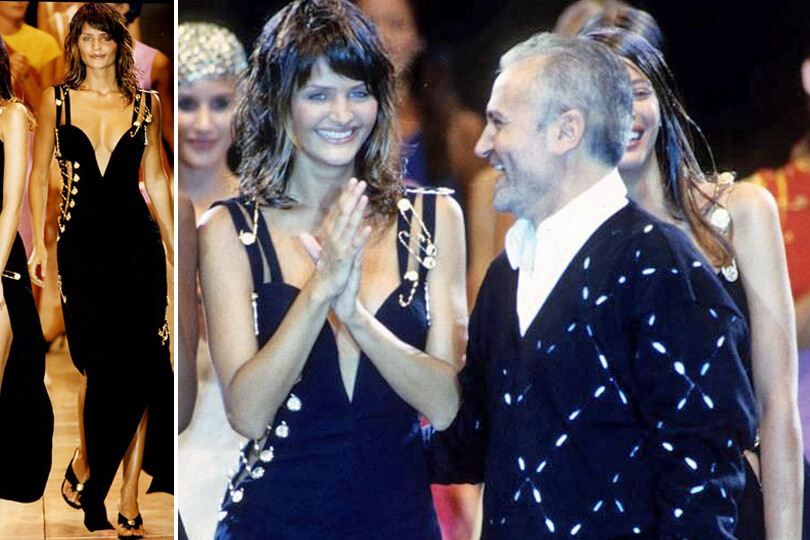 Gianni Versace made the source of his inspiration for the Spring/Summer 1994 collection clear through his lavish use of pins, and the slashed cut-outs that were the result of careful engineering. Specifically, the designer was quoted in a 1997 text by Richard Harrison Martin for the Gianni Versace retrospective exhibit at the Metropolitan Museum of Art, saying that the eye-popping safety pin dresses in the collection were inspired by the punk subculture (hence the safety pins) and the Indian sari (as seen in the wrap-around design of the silhouette).

Scrambling for a dress
Hurley was essentially an unknown actor prior to the UK premiere for Four Weddings and a Funeral. She had been in a relationship with up-and-coming actor Grant for seven years after they met on the set of the obscure 1988 film Rowing with the Wind. He was 27 back then, and she was 22. By 1994 they were inseparable, said Grant, because of their years spent living together in a little flat as struggling actors.

As the world premiere of Four Weddings and a Funeral in London approached, Hurley struggled to get any designer to lend her a dress. Grant confessed that numerous fashion houses turned down their requests because they didn’t know who she was. “There was a big premiere and someone told us, ‘Oh, you can borrow things from top designers,’” Grant said in the BBC documentary Hugh Grant: A Life on Screen. “Poor Elizabeth rang some top designers and they all said, ‘No, who are you?’ or ‘No, we’re not lending you anything.’”

At the very last moment, Gianni Versace, whom Hurley had met through their mutual friend Elton John, agreed to lend Hurley a dress fresh from his Milan runway show that had taken place just weeks before. There were no fittings or endless racks of options. The dress wasn’t deliberately chosen for maximum shock value – it was simply the last dress hanging in the closet at the Versace press office. Hurley later described the dress as a “favour” from the designer.

Nevertheless, when the press exploded after the premiere, Versace claimed that he “knew Elizabeth would look simply bellissima, perfetto in that dress. Liz has this intelligent face attached to that very naughty body. So seeing a woman like her in this gown was a guarantee that everyone would go pazzo [nuts].”

Hurley also gave a full account of the events leading up to the big night to Harper’s Bazaar. “I urgently needed to find a dress to wear for Hugh’s premiere, and in those days I had no idea about fashion,” Hurley said in the magazine’s April 2019 issue. “I remember going to an office where they literally fished a dress out of a white plastic bag. I took it home and did my own hair and makeup, fighting Hugh for the mirror, which wasn’t even full-length, in our tiny one-bedroom flat. It was all very unglamorous compared to how things get done these days.”

The big night
Four Weddings and a Funeral (written by Richard Curtis and directed by Mike Newell) starred Andie MacDowell and Grant, who played a single man named Charlie who falls in love while attending four different weddings and then a funeral. The quickie low-budget film (it was made in six weeks at a cost of under £3 million) became an unexpected success and the highest-grossing British film in history at the time – a title it held for 15 years. Four Weddings and a Funeral also grabbed an Oscar nomination for Best Picture, earned Grant a Golden Globe for Best Actor, and launched the actor’s long career of playing slightly flustered Brits. But, ultimately, the movie’s premiere will be remembered for one thing: Hurley’s black Versace safety pin dress.

The premiere took place on May 11, 1994, at Leicester Square in London, England, and when Hurley, then aged 29, stepped out of the limo alongside her floppy-haired boyfriend, and into the paparazzi’s viewfinders, Grant and his co-stars fell out of focus. The salacious décolleté! The sky-high leg slit! It was mayhem and a paparazzo’s dream! The cameras couldn’t get enough of Hurley and the dress. 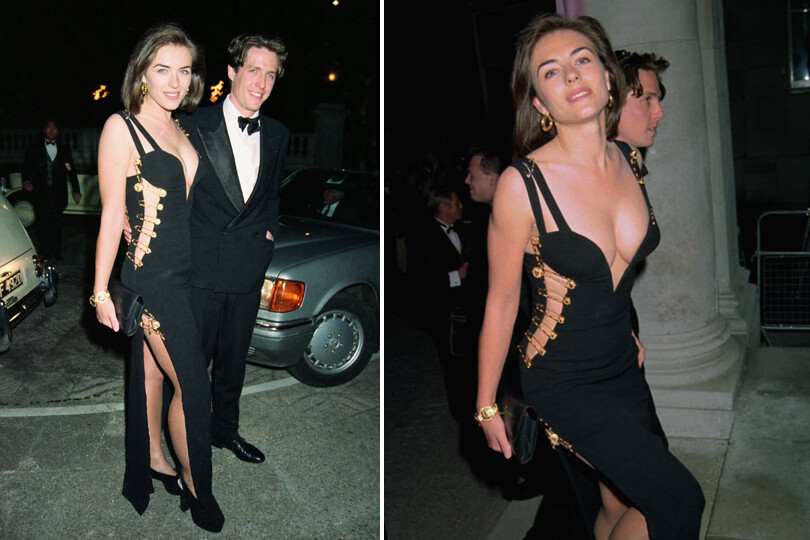 The next morning, and for some time after, Hurley and her safety pin dress received unprecedented global coverage in newspapers and magazines around the world. Her profile was instantly boosted, hurling her from being a virtually unknown actress to a worldwide media sensation. Hurley and her strut in the safety pin dress has also been credited for making the Versace fashion brand a household name and for sparking a revolution in red-carpet evening wear, which was remarkably modest in the mid-1990s.

Donatella Versace opened up in 2019 about one of her label’s most historic moments. “You’d expect something more interesting behind one of the most famous red-carpet dresses in history, but as for many things, chance played a big role in making it all happen,” she revealed in the InStyle 25th anniversary issue. “No one could really fathom such an astonishing reaction, or that Liz would steal the spotlight from everyone else.

“People across the globe started talking about the dress. That’s when we started to realize the power of the red carpet and celebrities in creating topics of conversation.”

Speaking on behalf of her late brother Gianni, Donatella also shared that “Gianni made that dress for a woman who is sure of herself and who isn’t afraid to break the rules. Liz embodied all of this in an extraordinary way.”

The aftermath
Afterwards, Hurley’s life changed dramatically. The safety pin dress opened countless doors for her: within a year, she had secured higher-profile acting roles and had become the face of Estée Lauder (she currently serves as the global ambassador for the brand’s breast cancer campaign). A few years later, she would star in her best-known film roles: Vanessa Kensington in Mike Myers’ hit spy comedy, Austin Powers: International Man of Mystery (1997) and as the Devil in Bedazzled (2000). In recent years, she starred as the sexy and morally questionable Queen Helena of England on E!’s drama The Royals.

But as the years have passed, our fascination with that dress has never disappeared.

In December 2018, Versace grabbed the attention of fashion watchers when they presented their pre-Fall 2019 collection, filled with designs reminiscent of the ’90s – most notably the safety pin gown, but now with a more modern look and feel to it.

Hurley embraced the return of the safety pin dress and recreated her iconic red carpet fashion moment for Harper’s Bazaar a few months after the runway collection was presented, to prove that 25 years after the iconic moment, she still had it. She slipped into the reimagined version of the unforgettable plunging Versace safety pin gown and posed for photographer Damon Baker for the magazine’s April 2019 issue.

In an interview that accompanied the spread, Hurley acknowledged her debt to that dress and commented on how it felt to reconnect with that life-altering moment. “Like a time revisited with affection,” she replied. 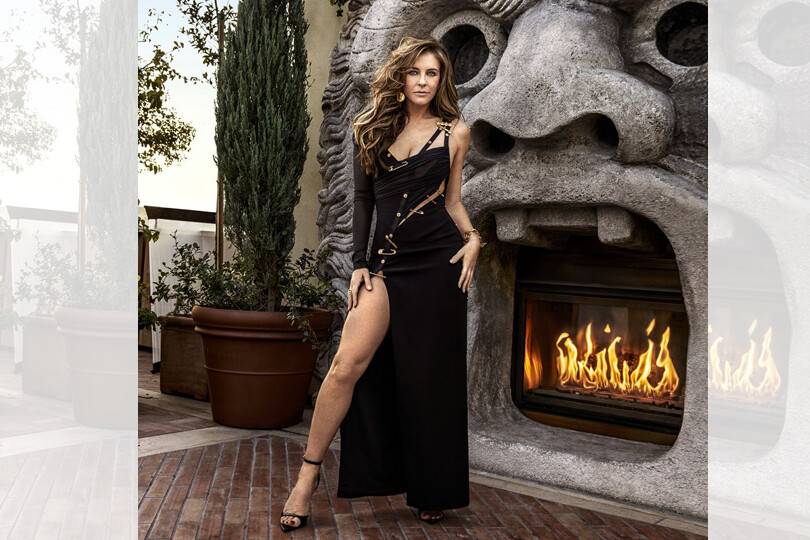 As for Hurley and Grant’s relationship…it would survive Grant’s arrest in LA in 1995, when he was caught with prostitute Divine Brown in his car, but they would eventually part ways in 2000. Hurley went on record saying that the break-up happened because Grant – apparently called Grumpelstiltskin by her friends – was “very annoying.” Despite the comment, the two remain good friends to this day.

Easy Wardrobe Tweaks for the Holidays 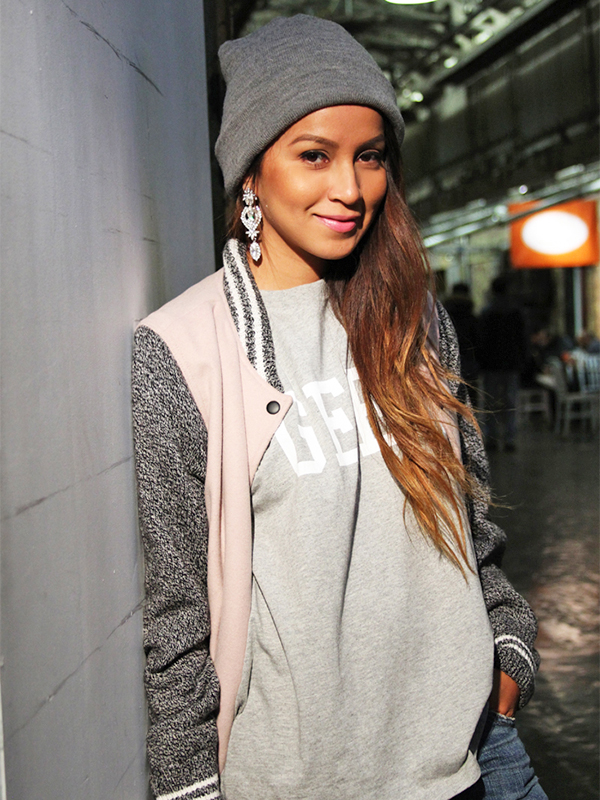