The Best & Most Extra Red Carpet Looks At The Met Gala 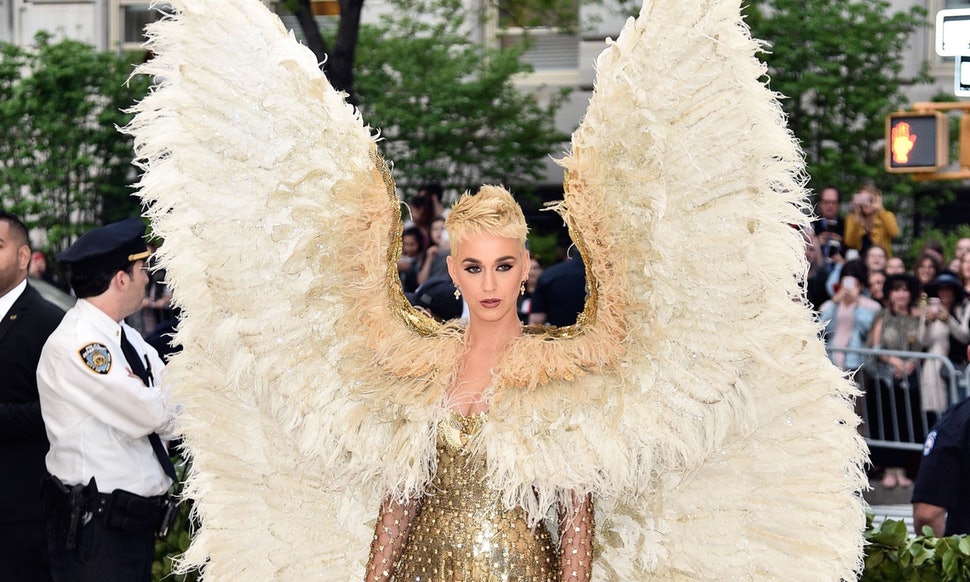 It’s the first Monday in May and you know what that means: it’s Rihanna Day, or as some like to call it, Met Gala day! As one of this year’s co-chair’s for the Met Gala 2018, we already knew that Rih would slay the competition on the Catholicism-themed red carpet (more on that later), but there were also plenty of other divinely blessed looks. At 29Secrets, we celebrate those who dare to stay on theme and take fashion risks on the red carpet (even if those risks turn out to be all kinds of wrong.). The theme of the night: “Heavenly Bodies: Fashion and the Catholic Imagination”, the new exhibit at the Met Museum’s Costume Institute. So get your crowns, headpieces and halos ready, as we recap the boldest looks of the night! 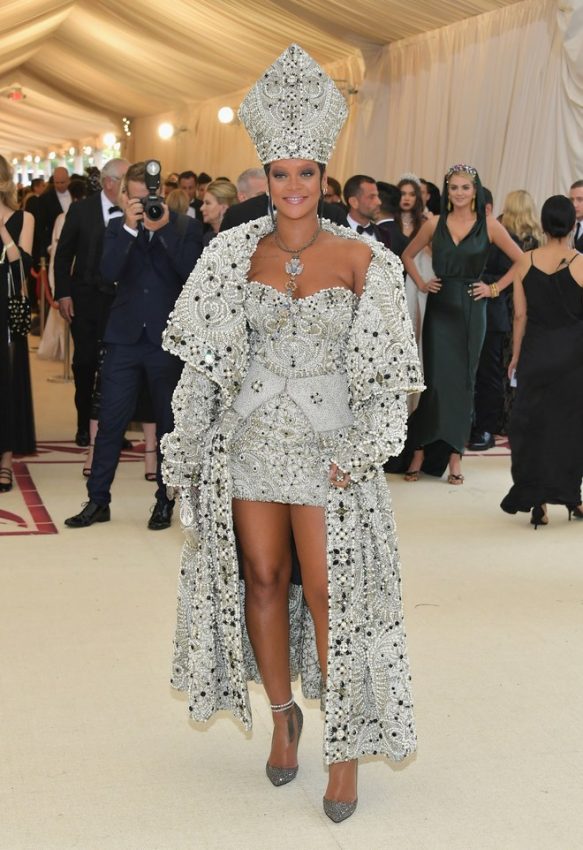 Rihanna channelled none other than the Pope (because, of course) in a heavily beaded ensemble created by John Galliano for Margiela. She’s feeling herself as usual, and we are too. 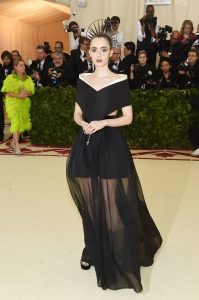 Lily Collins went for a gothic princess-meets-angel vibe, in a graphic and sheer gown and headpiece by Claire Waight Keller for Givenchy. Extra points for her makeup look which looks like faux tears of blood. You can’t get more Gothic than that. 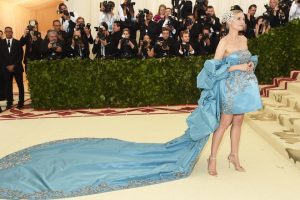 Diane Kruger looked like literal Wedgwood china come to life in an elaborate, Baroque-inspired dress with a major train designed by Prabal Gurung. It was a good attempt at a Rihanna moment, without out-Rihanna’ing Rihanna (!). 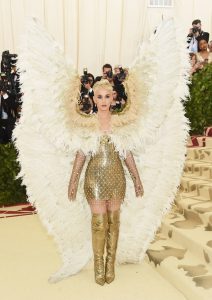 Katy Perry is a (Victoria’s Secret) angel fallen to earth in gold chainmail, go-go boots and huge feather wings. Not sure the look entirely works, but we appreciate that Katy made an effort to go there regardless. 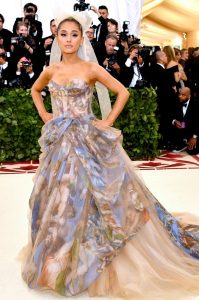 Ariana Grande wore one of our favourite looks of the night in this Vera Wang gown with a print inspired by Michelangelo’s The Last Judgement. We could do without the outsized bow on her head, but at least Ari is being Ari. 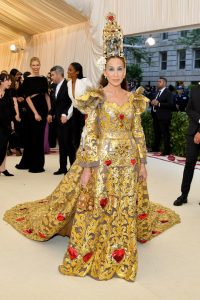 SJP always delivers, and for that we give her major props. Here, Sarah Jessica Parker is wearing a decadent gold brocade gown and mitre headdress by Dolce & Gabbana. Not one of our favourite looks she’s ever done, but the woman knows how to show up. 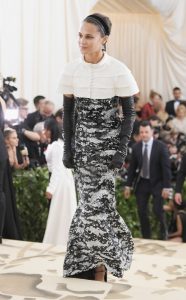 We were on the fence about this gown on Alicia Vikander at first but it’s actually kind of great in a Puritanical kind of way. There’s just so much going on with this Louis Vuitton look, and we kind of love the bonkers mish-mash of things, from the Papal-inspired capelet to the embroidered gown to the long-sleeve gloves. 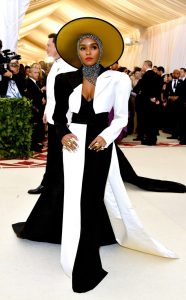 Janelle Monae’s 80s-inspired Marc Jacobs look wasn’t really on theme at all, but it was entirely Janelle in all its black and white checkerboard-inspired glory. 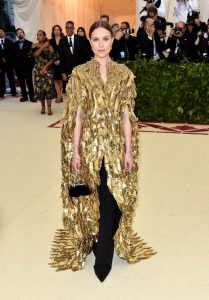 Evan Rachel Wood showed everyone how to do feather wings the fashion way, in a stunning gold feathered cape by Altuzarra. 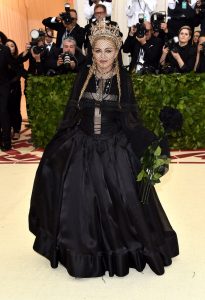 We would have been really disappointed if Madonna got the Catholicism theme wrong, (because Like A Prayer), but she showed up in this dramatic gothic Queen-inspired gown by Jean-Paul Gaulthier with a veiled crown. And black roses, too.

And then Zendaya showed up. As Joan of Arc. And shut the whole thing down. Well done, Versace. 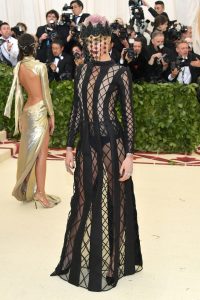 Speaking of things that are bonkers, we’re not really sure what’s going on here with Cara Delevingne’s look, but we kind of like the bold fishnet pattern paired with a bejewelled, crown-like headpiece and pink hair. It’s all sorts of wrong, but yet oh so right. 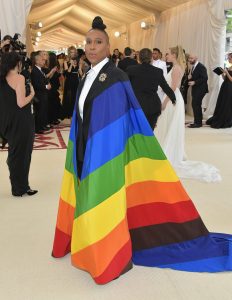 Lena Waithe was the biggest statement-maker of the night, wearing an LGBTQ+ rainbow cape designed by Carolina Herrara. At an event celebrating all things Catholic, Lean’s voice was heard loud and clear. 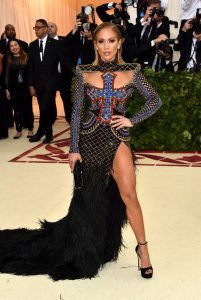 Oh, hi, J.Lo. We see you, and your exquisitely sculpted leg, too. We’re in love with this insanely beaded and feather embellished gown by Balmain. 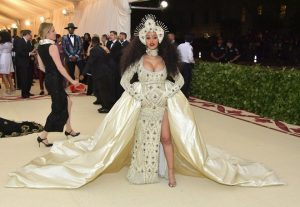 Cardi B is the queen of all music right now, and she came to own that crown in this major pearl-embellished Jeremy Scott gown. With gloves built right in to the dress, she highlighted her growing baby bump with pride. 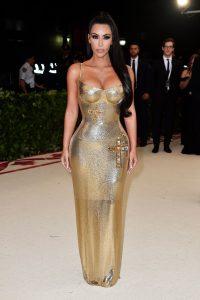 We’re not usually that into Kim K’s looks, but this gold vintage Versace chainmail dress fits her like an absolute glove, and was also subtly on-theme with its cross embellishments.

Solange polled Twitter to choose her Met Gala look out of four possible contenders, but since she wasn’t sold on the winner (a simple white gown), she instead chose this black latex Iris Van Herpen bubble dress. And we are living for its sculptural vibe paired with matching black latex boots and a geometric halo. It’s a look only Solange could pull off. 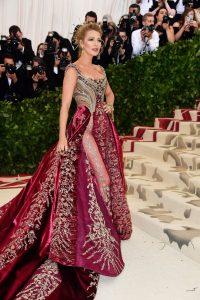 We’ve got to give it to Blake: this heavily beaded and brocaded red velvet gown is simply divine (pun intended). Paired with a subtle halo crown, she looks exquisite.

Nicki Minaj was absolutely swoon-worthy in this crimson-meets-burgundy gown and cape and beaded headdress by Oscar de la Renta.

First of all, it takes some serious balls to wear what an actual tent on the red carpet, but Greta Gerwig went there. At first glance, the design (by The Row), looks pretty simplistic, but the dress is actually insanely well-tailored and its dramatic shape and colour evoke both a nun’s habit and papal garment at once. We’re living for this architectural design. 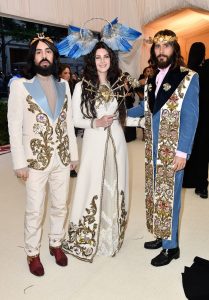 Out of all the crowns and headpieces on the red carpet last night, Lana Del Rey’s blue-bird headgear was probably the best. And that dress, with the knives literally stabbing her in the heart? Genius! We also love that these three (Gucci’s Alessandro Michele, Lana and Jared Leto) coordinated so well together, from the similar colour scheme, to the gold brocade embellishments to the crowns. 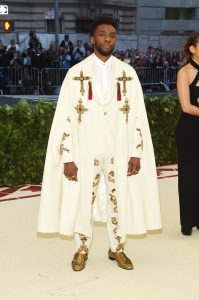 Last but never least, Chadwick Boseman in this papal-inspired cape and suit was by far our best dressed man. We were kind of hoping for a Black Panther cast reunion since their fashion was so on-point during the the film’s premiere tour, but Chadwick more than made up for the absence of Lupita and Danai.

The Next Big Trend: Pleated Pants 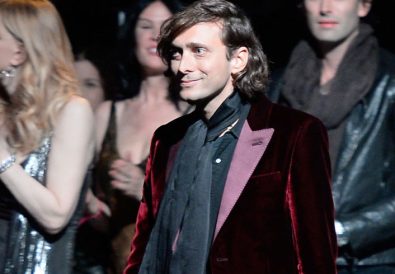 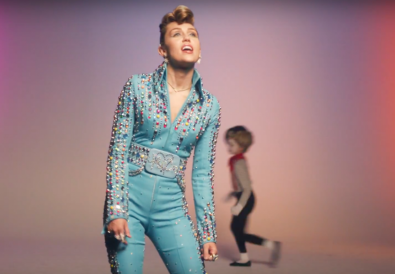