The Bravery of Taking a Stand

It takes guts to call someone or something out on their bullshit.

Is it terrifying? Absolutely. Will you be referred to as a number of descriptions, none of them particularly flattering? Probably. But considering we've likely all been called a variety of things anyway (since we are all human beings who have lived in this world and have been involved in conflicts with garbage people at points in our lives), we all know that's still not quite as bad as sitting there doing nothing. We're better than being sheeple.

I wish I could say I had a grand realization about standing up for someone or something, or that I could share some inspirational tale, but I didn't and I can't. For the better part of my 28 years I just wanted to fit in. I helped envelope a girls' yard in high school (I personally got egged regularly, so I felt too bad throwing eggs myself), I waited uncomfortably in the mall while some of the girls I hung out with stole whatever they wanted, and if my "group" hated a person, I actively hated them too. Which was especially ironic, since the same thing was happening to me on the flipside — further proof that high school brings out the worst in everybody.

So, by the time I was a fulltime working person, I'd swapped out "oh no you didn't!" feuds for other aspects of going along with the crowd: listening to a band because they were cool (when I really wanted to listen to Taylor Swift), talking shit about something I liked because it didn't align with my heavily cultivated persona, emulating or kissing up to people I'd never want to be friends with, and generally refusing to acknowledge my actual self.

I joined in if coworkers whose approval I craved ran their mouths about somebody I didn't really know, or I'd befriend people I didn't care for because I thought it'd get me closer to some imaginary goal I'd envisioned. I'd stop myself before saying, "Oh, she's really nice!" or "I actually like that movie" and go along with whatever I thought was the status quo because it was easier. I even held back on feminism speak (I KNOW), afraid that I was being a little "too much." But guess what: I am too much. And after a while the whole status quo schtick got old.

That's actually all there was too it: it got old. It got old to feel like some shitty version of my worst self, and I didn't like this me; this person who prided herself on speaking her mind, but only did it when it went along with what everybody else thought. I was 26 years old and acting like Gretchen Weiners, a fictional (albeit magnificent) high school student. Imagine if I was asked to stand up for something more important than hoop earrings? Imagine if I had to deliver a speech on why Brutus was just as smart as Ceasar?

But unlike a Mean Girls character, I didn't have high school as an excuse (and I was and am a real person). I also didn't have time to care anymore. As scary as it is to stand up for yourself, or for someone else, or for a cause, or for wearing sweatpants on Friday, it's still not as scary as realizing you are the person who's completely apathetic to your own life and everything in it. Apathy is easy, and it's gutless, and it's boring. To be yourself — whether "yourself" is somebody who knows the words to every romantic comedy, or somebody who is a career activist — takes character and it takes bravery. It also takes vulnerability, which is the scariest thing of all.

Those are the good types of fear, though. They make you grow up, and they demand action. They're also the fears that can't be silenced because unlike the fear of making some cool person think you're uncool, they won't be shut off until you act. I wish I'd said "enveloping this girl's lawn is stupid" and I wish I'd said "ughhhh this is embarassing" about any and all high school drama. But I was a teen then. Now, I am a grown-up (horray!), and figure that if somebody can't handle a friend who's a little bit much, they're not a friend worth having anyway. Or more specifically, they just don't know how important it is to go the matresses for something or someone you believe in yet. So maybe by you or I doing it for them, they'll learn it's okay to be themselves, too.

Tags: growing up, peer pressure, self help, taking a stand

What’s Her Secret: Kylie Woods of Chic Geek on Empowering Women in Tech 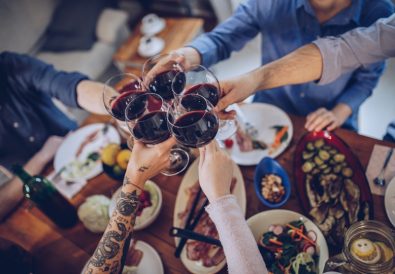 I Am Aging And I Like It: Dinner Party Edition